In Opposition to the SPP

The Security and Prosperity Partnership (the SPP) was originally launched in March, 2005 by U.S. president George Bush, and the former leaders of Mexico and Canada, Vincente Fox and Paul Martin, in Waco, Texas. The SPP is not a signed treaty, debated and passed in parliament. It is a semi-secret informal process – driven by the executive levels of the state and major capitalists in all three countries. The various component of the SPP continue to meet apart from the oversight of elected institutions. 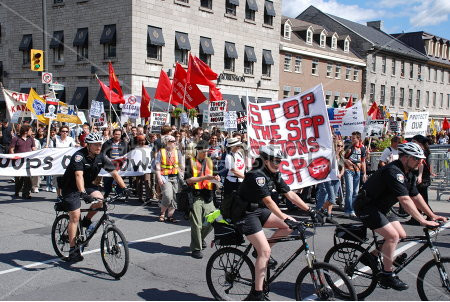 Covering over 300 policy areas, the SPP is a further step in locking-in neoliberal globalization in North America, through increased continental integration. It takes the objectives of NAFTA and adds the post 9/11 political and security priorities of the USA, creating new concerns around civil liberties, water, energy, the environment and the capacity of working people to shape a different economic and political future.

But more than just another attempt at pushing the agenda of “deep integration” forward – an effort that certainly needs to be challenged – the SPP should be understood as a reflection of the state of the neoliberal project today, driven by the strategic interests of Canadian, U.S. and Mexican capital. Opposing it requires building a movement that goes beyond the necessary defence of sovereignty and moves towards fighting the system that underpins the entire project.

What does the SPP do?

The SPP seeks to increase integration with the U.S., all the while strengthening the reach of neoliberal practises and institutions here. Among the areas covered by the SPP are:

What does it mean?

The SPP is not something that is being done to all Canadians. The Canadian capitalist class, like their counterparts in the U.S. and Mexico, are co-sponsors of the SPP and see this as a project that reflects their interests and goals. They introduced neoliberalism into Canada in the 1980s, and the Canada-U.S. Free Trade Agreement and NAFTA were both efforts to push it forward and lock-it in. They remain committed to deepening the neoliberal transformation of Canada today (more deregulation & privatization, tax cuts, weakening social programs) in the face of the growing opposition of much of the country’s population. They also desperately want to secure their access to U.S. markets and cement their ties to American capital in the face of the post 9/11 obsession with “security”. The SPP, and the deep integration agenda of which it is a part, is a project that allows them to accomplish both: the Canadian state and business interests, tied-in with the security apparatus of American imperialism, impose the neoliberal measures that Canadian people would never vote for, while economic integration continues.

Opposition to the SPP has been building, focused on the recent summit in Montebello. Thousands of protesters gathered there and in Ottawa, demanding an end to the SPP. They expressed the interest of Canadian working people. The build-up to the protests took the form of locally-based educational forums, rallies and organizational efforts to let the Canadian people know the dangers of the SPP and the project that underlies it.

Whether this will lead to the development of a new mass protest movement reminiscent of the anti-globalization demos of the earlier part of the decade – or the growth of a movement similar to the anti-free trade struggles of the 1980s and ’90s remains to be seen. Organizations like the Council of Canadians, other coalitions and groups and new movements based in Quebec have been working together to challenge the SPP. This has been very positive. But many of the young people that led the anti-globalization protests have moved on. The level of political mobilization of the anti-globalization movement remains quite below a few years ago. The trade union movement has yet to really engage, mobilize and educate their members on these issues. While the CLC officially endorsed the recent protest, the absence of the kinds of massive union numbers that marked the Windsor and Quebec protests of 2000 and 2001 was evident.

More important is the orientation we take in fighting the forces which drive the SPP. Opposition to integration with the U.S. is critical. Moderating this or that element of the SPP, or even forcing major revisions to the entire initiative, would signal an important political victory. But it is not enough. To defend our right to use our own water and energy; to break our dependence on fossil fuels and create renewable and environmentally-friendly energy sources; to protect the rights of working people – immigrants and native born, citizens and non-citizens; and to develop our own economic and political strategies, we need to direct our attack against the Canadian capitalist class that has set this agenda – and work to challenge its power.

The protest movement we need to build today must keep protesting. But we also need to build upon our political capacities to challenge the logic of capitalism in the workplace and in political and state institutions. The fight against the SPP is one flag being raised with the message of the need to fight for a different social system.

Mass demonstrations, such as those in Ottawa and Montebello, are potent political symbols. They represent political capacities and consciousness existing quite apart from the demonstration itself. They now register our opposition and distaste for specific policies. They need to evolve into a political movement that is capable of directly confronting neoliberal globalization throughout Canada and North America – in our workplaces, communities and political institutions. Such a movement is yet to be built. •