BC Teachers’ Federation – On Strike

What should we make of the current teachers’ job action in British Columbia? The short answer: B.C. teachers are very courageous in taking a stand.

A longer answer: Teachers’ actions have initiated an important public debate that is significantly raising consciousness, mostly about reduced standards in public education. There is a lot of support for the teachers, in part because it’s obvious to many that classroom conditions have declined, teachers have been stripped of the possibility of negotiating improvements (the government has decreed zero for wages and removed the right to negotiate basic working and learning conditions), the province has a hefty surplus (and most people want more money put into education and health care) and nobody but the teachers seem to give a damn about education. 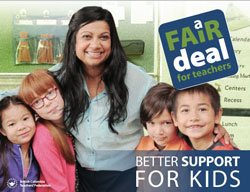 Jinny Sims, the BCTF president, is articulate, persuasive and held in high regard by her members and the union has positioned itself brilliantly in identifying the issues. They have also come out swinging on the importance of disobeying bad laws. Even jocks, who are usually moaning about not being able to coach their teams, have stated that they’re on another team as well and they’re team players.

Labour leaders are promising full support which the teachers welcome but, having long memories of other times when militancy disappeared overnight, have learned to rely on themselves. Certainly the labour movement’s track record over recent years is less than inspiring. Those outside B.C. may not be aware of just how right-wing Gordon Campbell’s Liberals are, driven by their mission to privatize what is now public and to get the government out of the business of governing. To do this has meant destroying whatever power unions had to stop them. Legislation has ripped up contracts, slashed the wages of thousands of public sector workers, eliminated their benefits, wiped out their pension plans and encouraged decertifications. In response, labour leaders have made militant speeches and organized mass rallies characterized by heady rhetoric. (“We will not back down!”), shouted from the podium to try to drown out the crowd chanting “General strike!”) But after the mikes were dismantled, banners folded and leaflets collected and tossed, no serious fight back occurred. They did, in fact, back down; sabre rattling with cardboard swords doesn’t scare anybody. In the result all the public sector unions signed on to wage scales of zero zero and zero, sometimes appended to gutted collective agreements. Only the Hospital Employees’ Union struck and tried to take a stand but it was beaten into submission, signing on to an ignominious and humiliating defeat. (The B.C. Federation of Labour, in urging the government to negotiate with the teachers, now points to the HEU settlement as proof that deals can be made even while job action continues.)

Until the teachers struck last week there has been a profound lack of leadership in the once militant B.C. labour movement and, as in even the smallest collective bargaining dispute, without leadership nothing much is going to happen. It’s as if the only options the leadership saw were (a) a general strike or (b) a complete cave-in. And they weren’t going for a general strike. In the result, defeats were paraded as holding our own, even to the members who had to bear them, within a general message that really, nothing can be done, at least not till the next election.

What the teachers have done is assert that leadership and give some heart to those who truly want to stop the government from shredding workers’ rights and public services. This includes, of course, thousands of union members and many of their leaders who may well be galvanized by the spectre of somebody finally doing something. The labour movement’s response is cautious, but it’s there. The B.C. Fed has organized a limited protest – an expanded lunch hour rally or half-day walkout – involving some Victoria unions. But there will be workers off the job in support of the teachers and that’s a good start.

How long can the teachers hold out? The BCTF says they’ll stay out till the legislation is repealed, but this is a very tough position to uphold – imagine what would have to happen for the government to agree to that. The employers’ association is sitting back on its heels and saying nothing more than is required of it, no doubt hoping the strike will go on and on and break the BCTF, which is certainly a possibility. Crippling fines are only a court application away and the right-wing lawsuits that have started on behalf of “parents” may well succeed.

While reserving on imposing fines later, the Court’s first attempt at enforcing its order effectively placed the BCTF under trusteeship. The Court has told the union it can’t pay strike pay, can’t use its resources to communicate with its members, can’t call meetings or place advertisements – i.e., can’t act like a union. The employer and government could scarcely contain their glee – so much more then they’d asked for! – fully expecting that individual teachers would now be starved off the picket line and that the BCTF could not counsel their members to continue alone. Believing, as employers always love to believe, that “their” employees are something apart from the big bad union, they could not conceive of a job action continuing without the labour bosses telling everybody what to do.

Remember when the grinch stole Christmas, roast beast and all, but Christmas came anyway? The teachers on the line are virtually unanimous in saying they don’t need their union to tell them anything at this point. They know why they’re out. The system has taken everything else away from them; it might as well take their strike pay, too. All they need to be told is when they can vote on a negotiated settlement so they can get back to class. The BCTF, really a profoundly democratic union, has done its groundwork over the years and this kind of comprehension and commitment is the result.

While the court order prohibits the BCTF from using its “books records and offices to permit third parties” to help out, teachers’ unions in Alberta, Manitoba, Ontario and Washington State have lined up to provide strike pay. College teachers in B.C. are going straight to the picket lines with $200,000: if we can bring coffee and doughnuts to the lines, they say, we can bring cash, too.

The teachers have potentially tremendous power if they follow the scenario of refusing to pay any fines that are levied and go to jail instead, as Jinny says she will do. The government doesn’t want martyrs but they might get them anyway. The courts may also impose individual fines on teachers which would scare them but which would also anger people and possibly generate greater support. Individual teachers would then have to refuse to pay the fines as well. It’s hard to imagine anyone standing up to that kind of pressure. But if they could it would create a major problem for the government. How long could they allow the schools to be closed? Can they fire all the teachers?

To get back to work with the fines held in abeyance and a dispute resolution mechanism would be a big win. As my old friend Ray Haynes once said, anytime a union takes on the government and gets out with its ass intact, you got to call that a victory. •

Get the latest news at www.bctf.ca

BACK-TO-WORK LEGISLATION
and HOW TO WIN AGAINST IT

Back-to-Work legislation – laws that temporarily (often for several years) deprive specific groups of workers of their rights to bargain and to strike – have a long history in Canada. Public sector workers who had undertaken perfectly legal strikes have in particular been targeted by governments which have reacted with special legislation declaring their strikes illegal (although in some cases the mere threat of a strike has been sufficient for governments to impose such legislation). These repressive measures were relatively infrequent during the immediate Post-WWII period, but with the increasing unionization of public sector workers coinciding with end of the post-war boom, these measures increased dramatically. Governments attempted to solve their budgetary problems on the back of public employees while at the same time setting an example for all workers as part of the neoliberal policy shift towards advancing capital’s rights and interests over those of labour. The use of such measures has continued right through to the present, as the table below shows.

The decline in the 1990s shown here is in fact misleading in that many governments had more general restrictions such as legislated wage freezes in place during the 1990s which made back-to-work legislation redundant. Indeed, the legislation has also become much more coercive over time. While the early legislation typically referred the dispute to arbitration, it is now common for it to rewrite collective agreements, eliminating many past gains and/or imposing wage reductions, backed by massive fines and jail terms for unions and/or individual workers in the event that they refuse to end strike action and acquiesce to the legislation.

Despite such threats, some well-organized, determined groups of workers have resisted. The most successful example of this was the Alberta Nurses Union’s successful illegal strike in 1988 – which may serve as model for the BC teachers today.

The well-organized and militant nurses’ union, which had defied back-to-work legislation in the early 1980s and, along with other hospital employees, had their right to strike abrogated through Bill 44 in 1983, proclaimed they would not accept an arbitrated settlement as prescribed in the legislation. When the Labour Board hastily intervened to declare even a strike vote illegal, this had the perverse effect of getting more nurses to vote for strike action. When the strike began, the government, together with the Labour Board, the hospital managers and the courts, threw one punitive measure after another at the nurses and their union, including $400,000 in fines, the firing of 22 nurses, and in the case of one Edmonton hospital, actually serving nurses who entered the hospital to provide emergency services with contempt papers. The solidarity among the nurses was very strong, with fewer nurses crossing picket lines than in earlier legal strikes; many of those who had crossed before explained that they now believed the most basic union rights were at stake. Sympathy for nurses was not new, but the committed ideological and material mobilization on their behalf by the Alberta Federation of Labour under the presidency of Dave Werlin galvanized crucial public support. Donations of half a million dollars were collected, and the union rather than the government came to be seen as occupying “the high ground of protection of the public interest. Admonitions by cabinet ministers that ‘the law is the law’ and should be obeyed regardless were met by cynicism. Both major city newspapers ran editorials denouncing the government’s handling of the strike and, implicitly at least, condoning the illegal action.” So strong and confident was the nurses’ leadership that, when the strike ended with a negotiated settlement, they would still not take their members back to work until the six month freeze on union dues imposed by the Labour Board under the new Labour Code was not implemented. •

From Leo Panitch & Donald Swartz, From Consent to Coercion (Garamond 2003).

Sharon is a writer and activist. She also taught labour relations and collective bargaining at the University of Victoria and worked as a freelance negotiator for various unions across British Columbia, specializing in arbitration and “duty to accommodate”.