Put another way, if Ontario had the same staffing capacity as the other provinces and territories, we would have another 33,778 full-time-hospital staff positions. 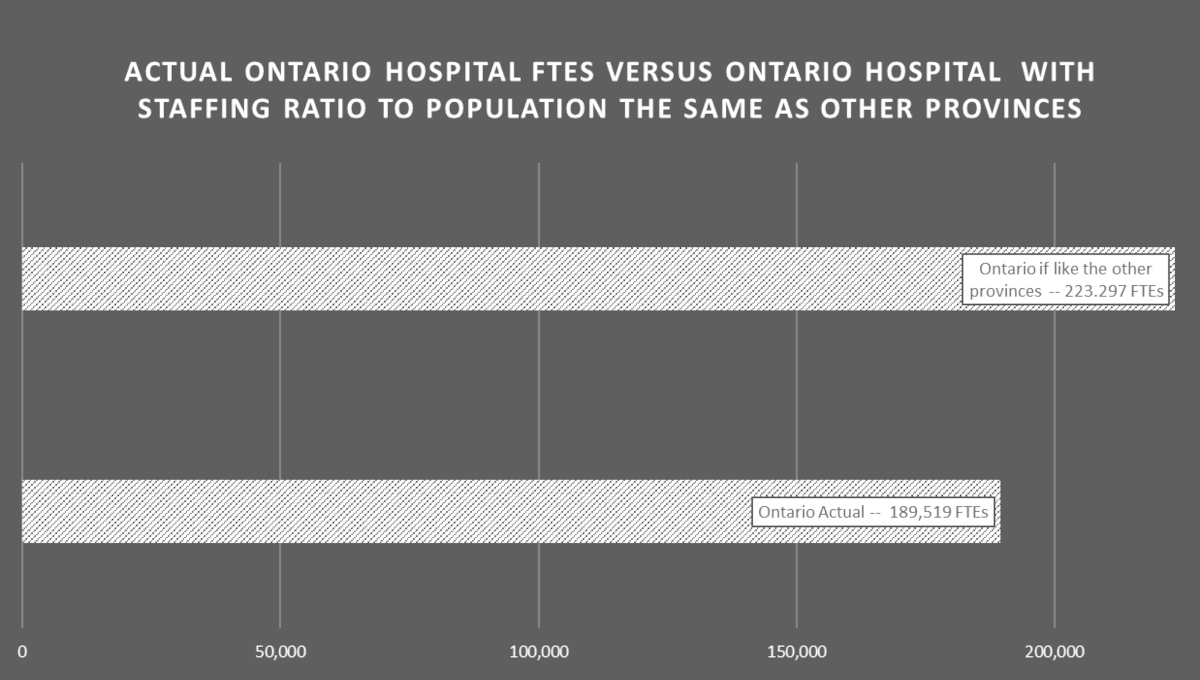 The low level of staffing also occurs despite the fact that Ontario hospitals devote a larger percentage of their staff to activities that go well beyond the traditional focus of hospitals on inpatient care.

Similarly, a larger proportion of hospital staff are involved in research and education in Ontario hospitals – with jobs in those areas comprising 4.4% of hospital jobs in Ontario but only 2.3% in other provinces and territories.

So, despite the low number of staff working in Ontario hospitals, Ontario has over 3,000 more staff working in both of these two areas compared to what it would have if these staff were in the same proportion to population as in the other provinces.

The low level of hospital staff in Ontario is also notable as there is a larger proportion of the population aged 65 and older in Ontario: 17.7% in Ontario in 2020 versus 17.4% for the other provinces and territories (excluding Quebec and Nunavut, as above). This age group accounts for about 60% of hospital inpatient days and, in effect, Ontario has 40,000 more people in this age group than if it had the same ratio as other provinces and territories.

Understaffing by area of hospital work: Roughly the same proportion of staff in both Ontario and in the other provinces are involved in administration and support services (e.g., cleaning, food, maintenance, stores) – just over 25%.

Nevertheless, given the low level of staffing in Ontario hospitals, there is a low level of staffing in these areas. If Ontario had the same ratio of support and administrative staff in hospitals to population as in the other provinces, there would be another 8,130 staff. That staff would support the cleaning, food, maintenance, administration and supplies needed for more inpatient and outpatient capacity. 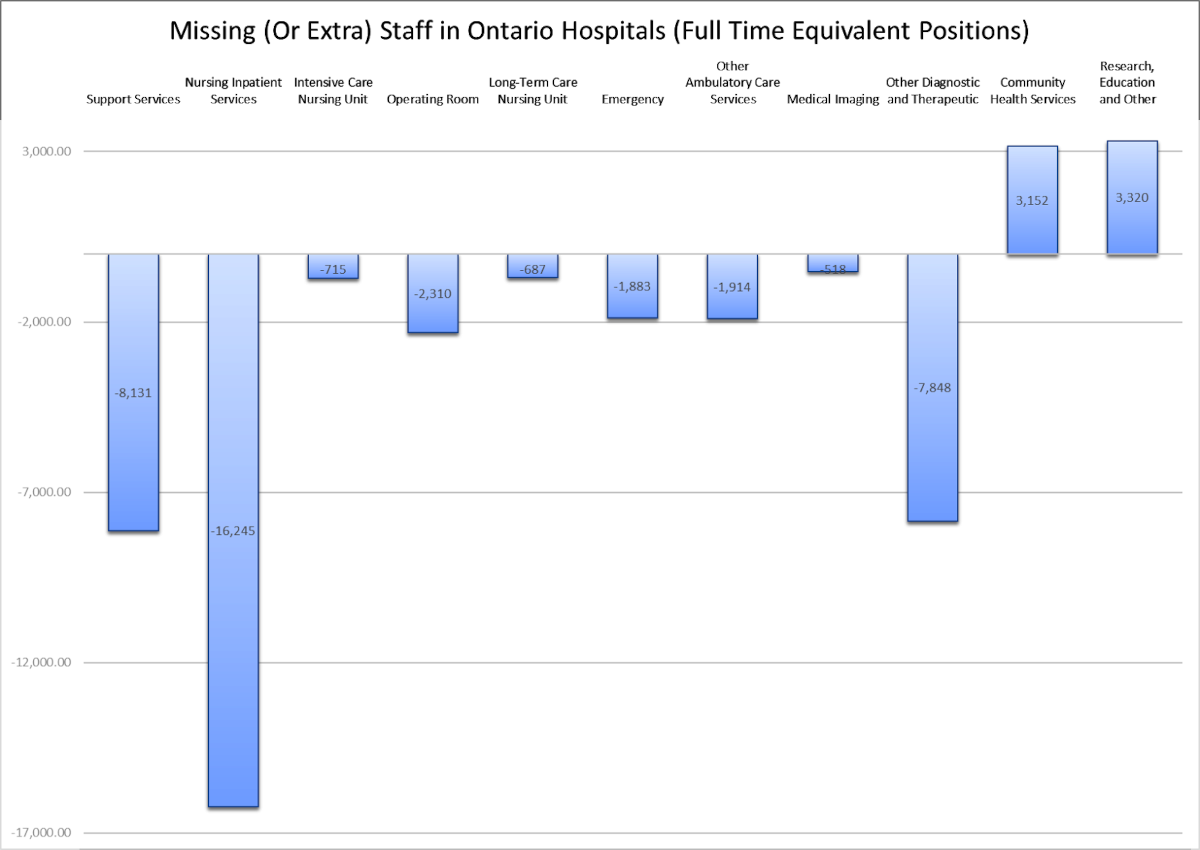 On this basis, there are deficits in other parts of Ontario hospitals: 715 missing FTEs in ICUs, 2,310 missing in Operating Rooms, 687 in Chronic Care, 1,883 in Emergency Departments, 1,914 in other ambulatory services, 518 in medical imaging, and 7,848 in other diagnostic and therapeutic services.

The largest part of the staff deficit for Ontario however is in nursing and inpatient services – Ontario has 0.285 FTE workers per 100 population in inpatient services versus 0.395 across Canada – fully 38.7% more. If Ontario had the same ratio of inpatient healthcare workers there would be another 16,201 full time inpatient jobs in our hospitals. That would allow a lot more beds and inpatients and would go a long way toward solving the capacity crisis we are currently experiencing.

No signs of solutions: Statistics Canada data on employment (slightly different than FTEs) in healthcare suggests that there has not been significant improvement over Ford’s tenure as premier, despite the crisis, with the total number of hospital workers hovering around 250,000 since the PCs were elected in 2018. 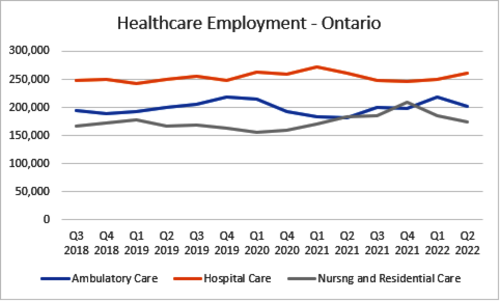 Even “nursing and residential care” (mostly long-term care) is basically at the same level of employment as when Ford was elected, despite all of his promises about new beds and more staff in LTC.

As the chart above detailing the three health sub-sectors suggests, total healthcare employment has practically flatlined, even declining slightly in the last two quarters reported (the first and second quarters of 2022): 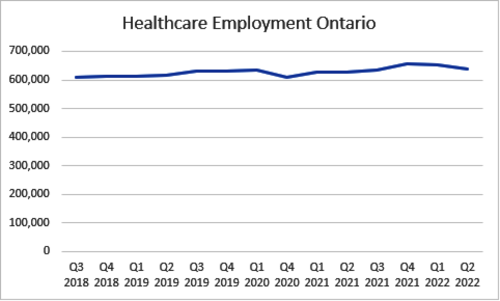 Can it really be any surprise that Ontario hospitals overflow when there is even a modest surge? For many years, authorities ignored community and labour demands to improve hospital capacity, living in a fairy tale that hospital capacity issues could all be dealt with by endless rounds of restructuring and a little extra home care. That fantasy, fed on dreams of low-cost solutions, continues still – but undercover in the face of the current capacity crisis.

Ford’s plan to add 1,300 hospital and privatized alternate health facility beds over several years will not even keep up with population growth, never mind aging, COVID, and post-COVID. So it certainly will not deal with the existing understaffing.

Surging needs for staff from other parts of the healthcare system (especially long-term care and home care) mean we need an immediate, comprehensive and aggressive strategy. But there is no sign of that from the Ford government, just small tweaks. The long-term trend toward lower hospital capacity will continue, unless this changes. • 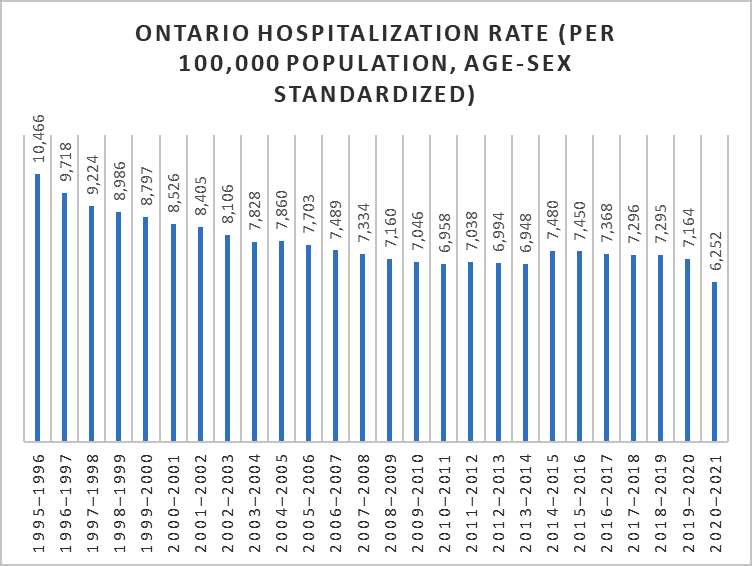