Ontario’s Bill 7 Rife with Discrimination Against the Elderly

At a press conference held on August 31st, the Ontario Health Coalition (OHC), the Advocacy Centre for the Elderly (ACE), and the Canadian Union of Public Employees (CUPE) announced they are escalating their call for the Ontario Human Rights Commission to launch a formal inquiry into systemic discrimination in the provision of healthcare in Ontario against the elderly based on age.

A public inquiry under the Human Rights Code has long been needed, however it has become even more urgent given the Ford government’s introduction of Bill 7, the More Beds, Better Care Act, 2022, which permanently suspends the right to consent for the elderly. If passed, Bill 7 will profoundly exacerbate pervasive and long-standing Ontario government health policies that discriminate based on age. In a letter to the Ontario Human Rights Commissioner, the groups renewed their call for the commission to investigate systemic discrimination based upon age against the elderly in the provision of healthcare in Ontario.

“Under the Ford government’s new legislation, frail, vulnerable seniors have been targeted, wiping out their human right to informed consent for healthcare,” said Natalie Mehra, Executive Director of the Ontario Health Coalition. “This is a fundamental question of justice. Elderly patients are not taking undue resources any more than other patients. It is the cruelty of ageism laid bare and the Ontario Human Rights Commission must finally take action.” 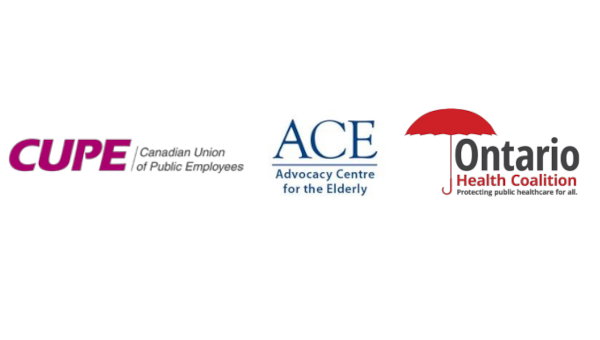 Moving Patients Without Their Consent

Under Bill 7, a patient designated Alternate Level of Care (ALC) may be moved to a long-term care (LTC) home without their consent. If they resist transfer, they may be charged a fee of hundreds or even thousands of dollars for every single day they remain in hospital.

“We previously raised grave concern about the designation of disproportionately elderly patients as ALC without sufficient and individualized attention to their particular care needs. Patients designated ALC are routinely treated as ‘bed blockers’ who do not require hospital care and are systematically denied equitable access to publicly funded healthcare services in this province. Older adults also need more and better alternatives to long-term care that would help keep them out of hospital and long-term care longer, if not entirely,” stated Graham Webb, Executive Director of the Advocacy Centre for the Elderly.

The OHC, ACE, and CUPE are again calling on the Ontario Human Rights Commission to use their public inquiry powers under section 31 of the Human Rights Code to investigate systemic discrimination in the provision of healthcare in Ontario against the elderly based on age.

“There can be no dispute that the province’s hospitals are under intense strain, and that access to health services for all Ontarians is backlogged by a critical staffing shortage. ALC patients are not, however, responsible for this crisis nor will forced transfer result in a single new staff position. Elderly ALC patients are a scapegoat to divert attention from Ontario’s decades-long policy of underfunding hospitals to levels far below population need – a trend the PCs plan to extend another 5 years. That these forced transfers involve suspension of the right to consent to care and no right to appeal is surely grounds for a human rights investigation,” added Michael Hurley, President, Ontario Council of Hospital Unions (OCHU)-CUPE.

Ontario now has the fewest hospital beds per capita of any province in the country and ranks third to last in number of hospital beds among all countries in the OECD. While the province has been pursuing the most extreme hospital downsizing policy in the developed world, it has also been systematically underfunding the LTC system. Ontario ranks second to last among all provinces in the number of LTC beds per capita, and currently has a wait list of over 30,000.

While the Ford government effectively blames elderly patients for ‘overstaying’ in hospital, this crisis is entirely one of the government’s own making, the advocates say. Denying elderly patients appropriate hospital care and discharging them into profoundly under-resourced facilities is not only inhumane and ineffective, but also deeply discriminatory. “The province’s Human Rights Commission has an obligation to our elderly to act. This is why we are renewing our call for an investigation,” they say.

In the spring of 2021, following thousands of vulnerable LTC resident deaths in the first and second wave of the COVID-19 pandemic, ACE, the OHC and OCHU-CUPE formally requested the Ontario Human Rights Commission launch an inquiry into Ontario’s systemic discrimination against the elderly in access to healthcare. •