Inflation, the Fed and Workers

The US Federal Reserve (the Fed) is supposed to have a dual mandate of “maximum employment and price stability.” However, a close look at its policies since 1980 have shown it very willing to sacrifice the former for the latter. The Bank of Canada (BoC) doesn’t even pretend to care about employment. Despite pressure from progressive economists for a dual mandate that includes high levels of employment, the BoC’s only monetary objective, renewed in 2021, is to “keep inflation low, stable and predictable.”

In prioritizing low inflation over employment since 1980, both central banks have caused considerable hardship to North American workers while protecting firms. In case there was any uncertainty about “which side” the central banks were on, both have shown much less tolerance for wage driven inflation than price increases that increase profits.

It is widely understood that the North American recession(s) between 1980 and 1982 were triggered by both central bank chairs (Paul Volker in the US and Gerald Bouey in Canada) raising interest rates to the highest point in history – up to 20% – ostensibly with a singular goal, to fight inflation. In reality, this policy had significant and long lasting distributional effects by increasing unemployment (in the US to 10.8%, in Canada to 12%) which held down wages while productivity increased, transferring income from workers to firms. When accompanied by the non monetary policies of cuts to social programs, easing regulations, hostility toward unions, and free trade agreements, a new gilded age of inequality often refereed to by critics as ‘neoliberlism’ was born. 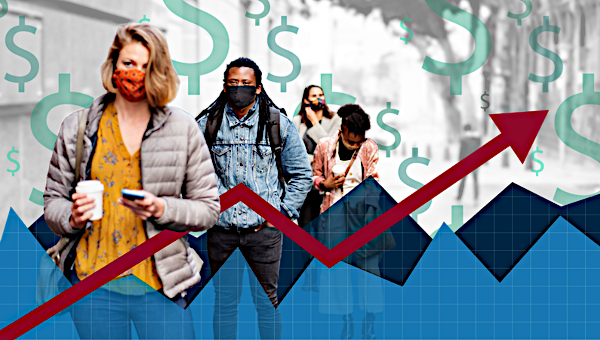 In a review of the Federal Reserve’s actual minutes of meetings and transcripts from 1993 to 1994 the economist L. Randall Wray concluded that while the Fed supposedly pursued only one goal – low inflation – actually it “shows a strong bias against labour and wage-led inflation, even as it tacitly accepts profits driven inflation.”1 Wray argued that the Fed raises interest rates fearing wage induced inflation but not when they are driven by profits.

Canada’s Bank Governor told the Canadian Federation of Independent Business in 2022 not to build higher wages into their contracts (Toronto Star). There is no evidence that he instructed them not to raise their prices.

One of the architects of these policies in the US clearly understood what side the Fed was on. Federal Reserve Chairmen Alan Greenspan noticed that in the 1990s US workers were “traumatized,” which wasn’t necessarily a bad thing:

“… As I see it, heightened job insecurity explains a significant part of the restraint on compensation and the consequent muted price inflation … Owing in part to the subdued behavior of wages, profits and rates of return on capital has risen to high levels.”2

Other architects of these policies were quite frank about their goals. In the UK, Alan Budd, professor of economics at the London Business School and chief economic adviser to like-minded Tory governments, described in astonishingly candid terms what occurred during the 1980s, stating that contractionary monetary policy and neoliberal fiscal policy were seen by the Margaret Thatcher government as “… a very good way to raise unemployment. And raising unemployment was an extremely desirable way of reducing the strength of the working classes. What was engineered – in Marxist terms – was a crisis of capitalism which re-created the reserve army of labour, and has allowed the capitalist to make high profits ever since.”3

Josh Bivens of the Economics Policy Institute calculated that since the trough of the COVID-19 recession in the second quarter of 2020, over “half of the inflation increase (54%) can be attributed to fatter profit margins, with labour costs contributing less than 8%,” and non-labour input costs another 39%. In Canada, non-labour payment are increasing faster that unit labour costs resulting in labour’s share of the national income declining during the recent period of inflation. In both countries wage gains are lagging behind inflation.4

When prices are growing faster than wages and profit margins are expanding, it is difficult to finger labour costs for an “overheated” economy. And yet central bank chairs in both countries appear to be sufficiently alarmed by the nominal wage increases workers are getting that they are raising interest rates to cool off the economy.

Despite it neutral wording, “cooling off the economy” is not painless and the pain is felt much more by some groups than others. Rising interest rates reduces demand, and is supposed to push down inflation, but by it does so by creating unemployment. As was the case in the 1980s, this pushes down workers’ incomes. So, despite the fact that inflation has not been caused by wage growth, it is workers, especially those low income ones most likely to be put out of a job, that will bear the brunt of the Fed’s war against inflation.

Given that a sizeable slice of the inflation is caused by supply – side problems, such as the price of gasoline, food and pharmaceuticals this is also a very blunt tool to deal with problems that, while wide ranging, are caused by very specific sectors in the economy.

It also does little to combat the main source of inflation – increased corporate mark-ups. Corporations have been doing very well recently. 2021 “was the top year for the Fortune 500 for total profits, profit margins and by profits per employee” (P. 27 June/July 2022). Three of the world’s biggest oil companies recently reported their biggest profits in history.

Those, as we clearly are, that are unhappy with the Fed’s interest rate policies offer two diametrically opposed alternatives. One side argues that the Fed is too timid and advocates faster, higher interest rate increases. This is the line of Harvard economist Lawrence Summers – the former Treasury Secretary in the Clinton administration and advisor to President Obama. He would like to see more aggressive interest rate hikes and more unemployment. He dismissed the idea that the inflation is caused by corporate greed and ridiculed the call for a bill to prevent price-gouging by declaring it as dangerous as Donald Trump’s claims that ‘bleach injections’ could treat COVID-19.

He has repeatedly called the Fed behind the curve and urged it increase interest rates more rapidly to stop the danger of entrenched inflation caused by workers’ wage demands and the threat of too much employment. His additional policy alternatives are to reduce tariffs, let more immigrants into the country, reduce regulatory burdens and restart student debt payments. Insider May 14, 2022.

A very different set of policy alternatives stems from the criticism that interest rate increases are unsuited to the particular causes of this inflationary period and unnecessarily punitive to those that the policy is purported to be protecting. If the primary cause of the growing inflation is increased mark-ups, then a more appropriate policy response is to try and decrease the mark-ups. One option, proposed by Bivens and some in the Democratic Party, would be a tax on high profits in industries that exhibit particularly high inflation rates, which would decrease the incentive for firms to drive up prices.5 This could be accompanied by government efforts to reduce some of the COVID related supply bottlenecks – as it did for masks and ventilators during the pandemic and the massive procurement by the US government during World War II. The benefit of these policies is that they directly strike the actual source of the inflation rather than working through demand constraint that harms those already hurt by inflationary pressures.

Government could also impose price ceilings targeted at those items particularly important to homeowners like utilities and food – part of the Emergency Price Stabilization Act introduced into Congress by Jamaal Bowman. Price controls have been used successfully in the past. The late Harvard economist, John Kenneth Galbraith, was charged with controlling prices during World War II – a time of almost no unemployment and tremendous demand due to the war effort. He used general price controls on the largest firms accompanied by a portfolio of measures to boost supply. During the inflation of the 1980s, Galbraith opposed the ruinous Volker interest rate policy, calling instead for price controls as part of a strategy to contain inflation while ensuring a full use of resources.6

Of course, those who profit from high prices will oppose price controls as vigorously as they will oppose increased taxes on price-gauging firms. However, the rest of society should seriously consider anti-inflationary policies that do not work by creating poverty and greater inequality for most North Americans. •

Robert Chernomas teaches economics at the University of Manitoba. He is co-author of the book To Live and Die in America.

Ian Hudson teaches economics at the University of Manitoba. He is co-author of the book To Live and Die in America.