In the first half of April 2022, India’s External Affairs Minister Subrahmanyam Jaishankar made some revealing remarks at a press conference in Washington, D.C. He was standing beside US Secretary of State Antony Blinken and US Secretary of Defense Lloyd Austin. When asked about India’s purchase of Russian oil, Jaishankar said: “If you’re looking at energy purchases from Russia, I’d suggest that your attention should be focused on Europe. We do buy some energy, which is necessary for our energy security. But I suspect, looking at figures, our total purchases for the month would be less than what Europe does in an afternoon.”

Jaishankar’s statement was not unusual. He and his colleagues have been pushing back against the West’s “concerns” and “advice” to India about its stance on Russia in the Ukraine conflict, including India’s refusal to vote against Russia at the United Nations as well as India’s discussion with Russia to set up a payment mechanism that would bypass sanctions imposed by the West. Visits by Western diplomats to India did not help to alter the Indian government’s actions.

India, under the government of Prime Minister Narendra Modi, has been firmly in the US camp, taking part in reviving the Quad and signing three foundational defense agreements with the United States. These moves suggest that India strongly agreed with the United States’ focus on the containment of China. Has India then shifted from this alignment with the United States based on its dealings with Russia? Is nonalignment back on the table? The answer to this question is far more complicated than it would appear on the surface. 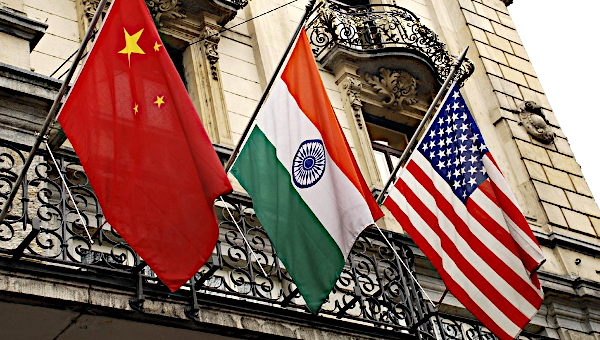 Part of India’s recent response can be explained by simple economics. For a government dealing with mounting inflation, the prospect of oil at discounted rates from Russia was too good to resist. Also, Russia continues to be India’s largest arms supplier, although the dependence seems to be decreasing (imports from Israel and the United States have surged in the past 30 years). A much less noticed fact is that India also depends on Russia for fertilizers that are vital for its agricultural sector. These economic bonds are too profitable to sever. There are precedents for this too. After all, India did not give in to US pressure and even the threat of sanctions when it came to procuring the S-400 missile system from Russia. Geopolitically, Russia remains key if India wants to engage in its immediate neighborhood where it has previously missed the bus at key moments, such as during the crisis in Afghanistan.

However, at the current moment, purely economic and geopolitical perspectives are perhaps inadequate.

India’s post-Cold War approach has often been defined as strategic autonomy, which has encompassed groupings as diverse as the BRICS alliance of Brazil, Russia, India, China and South Africa; the Shanghai Cooperation Organization; and the Quad, comprising the United States, India, Japan and Australia. However, India’s foreign policy in the past few decades has been characterized by a more transactional approach, taking advantage of what has made financial and strategic sense at a particular moment than any long-term perspective.

The responses of the West and its allies to the war in Ukraine indicate that such an approach has limited utility. The sanctions regime, the seizure of assets and freezing of reserves and the attack on Russia’s currency are not mere responses to an armed conflict. They mark actions that have been weaponized previously and deployed against countries like Cuba, Venezuela and Iran and are a warning to anyone who seeks to challenge the hegemony of the United States and its allies. They are a sign that any substantive challenge to the current global order will be met with a harsh response. The target is Russia today. Could it be China tomorrow? India the day after?

The current moment calls for a fresh approach, and this is where the proposal for nonalignment crops up. Although it is not a new idea, it may now have found its moment of urgency.

The genesis of the Non-Aligned Movement (NAM) lay in the tradition of anti-colonial struggles. For instance, an emergent NAM intervened critically in liberation movements in Africa. In contrast with colonialism, which evolved and continued its predatory activities, NAM was reduced to a moral voice, and its members were isolated and preyed upon by the neoliberal global order that rose from the 1970s.

So, what does nonalignment mean today when a few men and women, with the stroke of a pen, can seize billions in foreign reserves and bar trade between two sovereign countries? It is clear that in order for nonalignment to be effective, it cannot be restricted to transactional relationships or mere moral posturing.

It is also clear that the nonalignment of today must be based on the demand for the transformation of the world order, which will entail the rejection of the dictatorship of the World Bank and the IMF and the enduring impact of debt, the abolition of sanctions as a tool of war, and a more equitable United Nations. This requires the building of structures for which there are precedents. The BRICS nations had the right idea with the New Development Bank, referred to as the BRICS Development Bank previously, which can be a model for future blocs. Organizations like the Union of South American Nations (UNASUR) and the Community of Latin American and Caribbean States (CELAC) in Latin America provided examples of such groupings in action.

Such structures are, however, not built in isolation or merely because a few leaders decree it. Their foundation must be based on a two-pronged strategy by individual countries. One prong must be a renewed emphasis on self-reliance in economic development and scientific and technological research. This is perhaps what India lost out on when it abandoned central planning and ended up being a supplier of skilled human resources and a mere recipient of both technology and goods.

The other prong has to be economic relationships that play to the strengths of each of the countries, and which can be achieved despite political and diplomatic differences. Trade and commercial blocs in Southeast Asia, Africa and Latin America all have provided hints of what this could mean and how profoundly it could affect the global order.

For India and other countries in the Global South, this moment offers immense challenges and provides glimpses of a possibility of a new world. Will India transcend its transitional approach and embrace this possibility? There is little reason to expect any desire for change from the ruling class – but its possibility is integral to the agenda of people’s movements. •

This article was produced by the Morning Star and Globetrotter.

Prasanth Radhakrishnan is a journalist with Newsclick and Peoples Dispatch.