As the Planet Warms, We Are Sacrificing Lives for Profits

The World Meteorological Organization (WMO) recently dropped a bombshell announcement that should have garnered news headlines in the major global and US media, but did not. New WMO research concludes that “[t]here is a 50:50 chance of the annual average global temperature temporarily reaching 1.5 degrees Celsius above the preindustrial level for at least one of the next five years.”

WMO Secretary-General Professor Petteri Taalas explained, “The 1.5 degree Celsius figure is not some random statistic. It is rather an indicator of the point at which climate impacts will become increasingly harmful for people and indeed the entire planet.”

In 2015, the likelihood of reaching that threshold within five years was nearly zero. In 2017 it was 10 percent, and today it is 50 percent. As we continue to spew greenhouse gases into the atmosphere in dizzying amounts, that percentage spikes with every passing year and will soon reach 100 percent certainty. 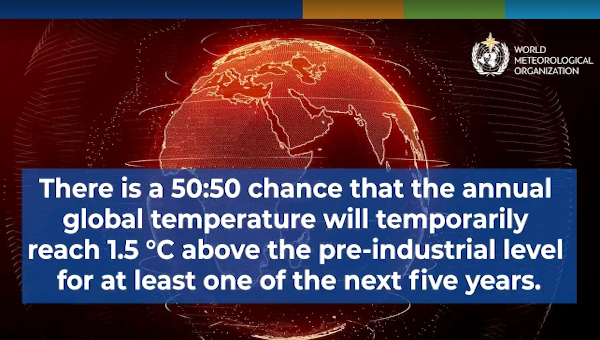 The planet has already heated up by 1.1 degrees Celsius, and the consequences are dire across the globe.

India is experiencing its worst heat wave in 122 years, and neighboring Pakistan has broken a 61-year-old record for high temperatures. Dozens of people have already died as a result of the extreme heat.

In France, farmers “can see the earth cracking every day,” as a record-breaking drought has thrown the country’s agricultural industry into crisis mode.

In the United States, across the central and northeastern parts of the country, there is a heat wave so large and so severe that people from Texas to Maine experienced triple-digit temperatures in May.

Even the wealthy enclave of Laguna Niguel in Orange County, Southern California, is on fire, and dozens of homes have been destroyed. Although moneyed elites have far more resources to remain protected from the deadly impacts of climate change compared to the rest of us, occasionally even their homes are in the path of destruction, indicating that nowhere on Earth will be safe on a catastrophically warming planet.

In such a scenario, it is a massive no-brainer for the world to quickly and without delay transition to renewable energy sources. Instead, President Joe Biden in April announced the sale of new leases for oil and gas companies to drill on public lands, reneging on his campaign platform’s climate pledges.

The New York Times’s Lisa Friedman explained, “The burning of fossil fuels extracted from public land and in federal waters accounts for 25 percent of the greenhouse gases generated by the United States, which is the planet’s second biggest polluter, behind China.” Here is one area where the federal executive branch has control, and yet financial considerations have been dictating responses rather than existential ones.

After climate activists vocally denounced the move, Biden did finally cancel the drilling leases for Alaska and the Gulf of Mexico. The Interior Department cited a “lack of industry interest” and “conflicting court rulings,” rather than pressure from activists, as the reason for the cancellation. Regardless, it is a small measure of relief for a planet that is on its way to burning to a crisp.

While Biden (and other lawmakers) claim they are driven by rising inflation and the impact of high gas prices on voters’ pocket books, it turns out the public doesn’t actually want a glut of oil and gas to help lower costs.

A new poll by the National Surveys on Energy and the Environment found that there is no longer skepticism among the public that the effects of climate change are real, as 76 percent of respondents – the highest on record since the poll started – “believe there is solid evidence that temperatures on the planet have risen over the last four decades.”

The poll also notably concluded that “Americans continue to favor reducing greenhouse gas emissions as their preferred approach for staving off the worst impacts of climate change,” and that they “remain skeptical of any pivot from mitigation toward climate policy that prioritizes adaptation, use of geoengineering or subterranean carbon storage.”

So, rather than invest in mitigating climate change or adapting to it – which is what market-driven economies favor – people, sensibly, want to stop the planet from warming in the first place.

Transition to Renewables – When?

Still, there is growing concern among climate scientists that it may already be too late for a transition to renewables. In spite of energy sources like solar and wind becoming rapidly cheaper and more accessible, overall energy consumption is increasing about as fast, as per one recent study. Mark Diesendorf, the author of the study, explained, “it is simply impossible for renewable energy to overtake that retreating target. And that’s no fault of renewable energy. It’s the fault of the growth in consumption and the fact that action has been left too late.”

Because corporate profit-based considerations have constantly dictated our energy use and climate policies, we have effectively decided that major sacrifices of lives – most likely poor people of color – will be worth the pain of relying on fossil fuels for energy.

There is an analogy to be found in the COVID-19 pandemic. For months, scientists sounded the alarm over prevention, endorsing lockdowns, masks, and vaccines to stop the spread of the deadly virus, just as climate scientists issued warnings against global warming for decades. Both science-based campaigns faced uphill battles, each with its own challenges in recommending the most rational guidelines to maximize public safety in spite of financial sacrifices (closing down most businesses and restaurants and canceling major sporting and entertainment events, in the case of COVID-19; promoting solar power subsidies, switching to wind energy, and manufacturing hybrid and electric vehicles, in the case of the climate crisis). All the while, corporate interests and right-wing political opportunists successfully pushed their own agenda in the halls of power, insisting that economic growth was the most important consideration.

Today, even as COVID-19 infection rates are skyrocketing, with cases having risen by 58 percent in the last two weeks alone, mask mandates are being dropped all over the country and COVID-19-related restrictions are ending. This is not because the virus is under control – it is clearly not – but because it’s no longer financially viable for corporate America to sacrifice profits for lives. So, it will sacrifice lives for profit – just as is the case with the climate crisis.

It is worth spelling out this equation so that we know where we are headed. As the climate changes, we begin to see where the bodies are buried – literally. Water levels in Nevada’s Lake Mead have fallen so dramatically that the remains of at least two human bodies were recently discovered. What other disturbing discoveries are in store for us? •