The Call to Stop the War Has Never Been More Necessary

A British government whose own record of warmongering does not bear much scrutiny made two central points when the Russian invasion of Ukraine began two months ago. One was to say that the invasion had nothing to do with NATO expansion or the foreign policy espoused by the US and UK governments. The other was to argue that, while it would support arms and finance to Ukraine, and sanctions on Russia, there was no question of direct intervention in the war. This was a view echoed by NATO and its member states.

It all looks rather different now. Since then, western weapons and military equipment have regularly flowed into Ukraine. The Special Air Service (SAS) is training Ukrainian troops inside the country, and Ukrainian generals have visited Salisbury Plain to see the weapons they are to receive in action. The US government has now sent $3-billion worth of weapons into Ukraine.

In addition, the war is clearly developing as a proxy war between Russia and NATO. Russian President Vladimir Putin is becoming increasingly dismissive of peace talks, as is UK Prime Minister Boris Johnson who again ruled them out on his trip to India last week, claiming to talk peace with Putin was like dealing with “a crocodile when it’s got your leg in its jaws.” The alternative for Johnson is to send ever more weapons to Ukraine. So as Russia’s war in Ukraine moves into its third month, talks of peace and de-escalation are being replaced with signs of greater preparation for war. The US is leading this move. 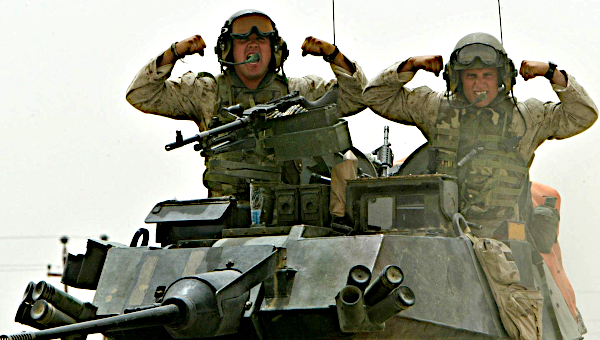 NATO leaders recognise that Russia has not done anywhere near as well as expected in the first phase of the war, losing troops, weaponry and failing to gain the rapid advances that it initially expected. In the latest phase concentrated in the Donbas region and in the south, supply of weapons and training of troops by NATO are seen as crucial. The US wants to take advantage of this to inflict defeats on Russia and weaken its military capability. The prospect makes any peace talks or negotiations much more distant and makes the threat of direct conflict between nuclear armed powers at least a step closer.

This was underlined by the supposedly secret trip to Kyiv by US Secretary of State Antony Blinken and the UK Defence Secretary Lloyd Austin at the weekend, which signalled another turning point in the Ukraine war. Whereas America’s goals in Ukraine were initially defined after the Russian invasion as wanting the troops to leave and protecting Ukraine’s territorial integrity, Austin made clear that these goals have changed. “We want to see Russia weakened to the degree that it can’t do the kinds of things that it has done in invading Ukraine,” he said. This represents a step further toward open ended war involving NATO and Russia and means that an end to the war in Ukraine will not end the conflict between the two. Militarism and increases in arms spending across Europe will be coupled with the continued maintenance of sanctions on Russia.

The meeting of defence ministers from 40 countries along with NATO secretary general Jens Stoltenberg is being hosted by the US at its Ramstein airbase in southwest Germany. Already Germany is committing to sending anti-aircraft tanks to Ukraine, and there is political pressure on its Chancellor, Olaf Schulz, to go much further in providing arms. This is part of a stream of weapons going into Ukraine from NATO countries, alongside the training of Ukrainian troops to use those weapons.

The significance of the meeting is clear: Ramstein is one of the US’s most important bases in Europe and formerly home to US nuclear weapons in Germany. The message that the US is ready for conflict and that it is lining up its allies behind it could not be clearer. Its conclusions will point in only one direction – to more weapons for Ukraine and for pressure on any NATO member state which shows any reluctance to provide them, as the German government is now feeling.

US Pressure to Extend the War

The US government – backed very strongly by Boris Johnson here in Britain – wants the war to continue because it believes that this will further weaken Russia, strengthen NATO and decree that its member states, especially in Europe, spend far more on ‘defence’ and the military than they had previously allowed. Britain is desperate for more involvement. Attack by Ukraine on targets in Russia appears to have used British made missiles. According to defence minister James Heappey “it was ‘not necessarily a problem’ if British-donated weapons were used to hit sites on Russian soil after accepting that the weapons allies were supplying to Ukraine had the range to be used over borders.” However, if NATO supplied weapons are targeting Russia this could very rapidly become a problem in the form of war between nuclear powers. Already Russia is talking up its nuclear capabilities.

Those who urge the supply of weapons to end the war may do with the best intentions, but the effect is likely to be the opposite. It will prolong the war not shorten it and it contains all the dangers of further military and geographical escalation. Russia is the clear aggressor and should withdraw its troops. The war is between two sovereign if unequal states. It is fast becoming a direct war between NATO and Russia. This is becoming clearer by the day, and it creates the most dangerous situation internationally since the Second World War.

The people of Ukraine are already the victims of this war and have suffered on a mass scale. Over 15,000 Russian soldiers have been killed. The unfolding prospects are horrific – of a war which rages on for a long time within the borders of Ukraine, as we have seen with Afghanistan, or one which begins to involve much wider forces and possible future nuclear conflict. The call to stop the war has never been more necessary. •

Lindsey German is a leading member of the Stop the War Coalition.