The Impact of the German Energy Shift on Canada

“Putin was amazed at Germany’s reaction,” French President Emmanuel Macron told his aides, after a telephone interview with the Russian president. So reports Le Canard Enchaîné in its March 2, 2022 edition.

In all likelihood, Putin expected Germany, given its dependence on Russian gas, to oppose sanctions on Russia after the invasion of Ukraine. If Putin’s bet was to split NATO, he lost it.

Germany has made a spectacular 180-degree turn, the geopolitical consequences of which are difficult to grasp. It first renounced the commissioning of the Nord Stream II pipeline, which was to double its gas imports from Russia. But above all, there is the fact that Germany, a reserved and pacifist geopolitical actor as a consequence of its role during the Second World War, adopted a plan to reinforce the German army by €100-billion, as well as the decision to increase its defense budget to 2% of gross domestic product (GDP). In addition, Germany has agreed to supply arms to Ukraine. A taboo has been lifted. 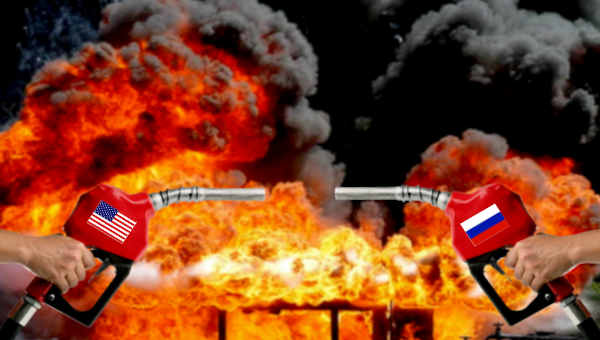 The End of a Taboo

The militarization of the German economy will worry Russia – given the past – but also the United States. The new orientation will encourage Macron to move forward with his plan for a common and independent European defense (read: independent from the United States), as he reaffirmed in his address to the nation on March 2.

It is a total reversal of doctrine. Until now, foreign policy has been dominated by the doctrine known as “Wandel durch Handel” (change through trade). Berlin believed it could “change” China by exporting cars – China is today Germany’s main partner – and Russia by importing its hydrocarbons. Germany imports 55% of its natural gas, 35% of its oil, and 50% of its coal from Russia. Hydrocarbons are not only a source of energy, but also a raw material for the chemical industry.

German employers will now recognize that economic exchanges cannot be independent of geopolitics and will be preparing to review their relations with China.

However, in the shorter term, the urgency is to secure the energy supply. Foreign Minister Annalena Baerbock of the Greens has not ruled out extending the life of the highly polluting coal-fired power stations. It has also not excluded that the three nuclear power plants still in operation, which were to stop production at the end of 2022, will be kept in service. Economy and Climate Minister, the environmentalist Robert Habeck, said he would not “oppose it for ideological reasons.”

He also announced his intention to open two terminals to receive liquefied American shale gas. On March 1, he traveled to Washington to discuss the security of those supplies.

The Canadian Oil Industry Is Salivating

Canada will not be left out. The oil-and-gas industry is salivating, arguing that Canada is the repository of the third largest proven oil reserves in the world. The terminal and gas pipeline projects have been taken out of their boxes. In La Presse+ of March 3, Paul Journet mentions the conversion of an existing terminal in Saint John, New Brunswick, previously dedicated to imports, which would now be used to liquefy Canadian gas that would then be shipped abroad. Another terminal, a new infrastructure in Goldboro, Nova Scotia, would perform the same function. The terminal project was authorized in 2012, without any assessment. It would involve the construction of an oil pipeline in southern Quebec.

One can bet that the LNG-Quebec project will be reactivated. Its abandonment was justified by the low price of natural gas – an argument that no longer holds, with the current surge in hydrocarbon prices which, obviously, will continue and reach new heights.

Skeptics will be Confounded

Those who are skeptical of this scenario cite pipeline construction delays and the environmental argument.

The first argument does not hold water. The current crisis is not cyclical. The Ukrainian crisis has convinced Germany and Europe to increasingly do – but as soon as possible – without Russian hydrocarbons. And the oil and gas industry will move forward, knowing that if there is a turnaround, “their” government will come to the rescue, as proved by the purchase of the TransMountain Pipeline.

As for the ecological argument, the example of the German Greens – once the most militant environmentalists in the world – is particularly instructive. They have just put aside their ecological convictions and no longer believe that it is possible to replace hydrocarbons with clean energies in the medium term.

And Canadian politicians are far from matching this environmentalist fiber. The Conservatives, their interim leader, Candice Bergen, and their two candidates to succeed O’Toole (Pierre Poilièvre and Jean Charest) have already announced their desire to support oil and gas pipeline projects.

Prime Minister Trudeau will not be outdone. He told the House of Commons, “Europe is still hugely dependent on Russian gas and oil (…). We are heading toward a decarbonisation of the global economy. But we are not there yet; so, we will be there with the resources necessary to help our European friends.”

We will be able to judge the depth of the convictions of the Trudeau government and its Minister of the Environment, Steven Guilbeault, on March 4, when Guilbeault announces the government’s decision on the Bay du Nord oil drilling project off the coast of Newfoundland and Labrador. This offshore drilling project would produce approximately 300 million to 1 billion barrels of oil over a 30-year span. This would result in the emission of at least 430 million tons of CO2 eq., equivalent to the greenhouse gas (GHG) emissions of eight coal-fired power plants, or to the addition of 7 to 10 million cars on our roads.

Finally, if more argument is still needed to convince the skeptics, we can point to what the international press has just realized – and we already knew: that it is Canada’s Deputy Prime Minister Chrystia Freeland who is in command of the government. An article in the newspaper Le Monde of March 4, entitled “Chrystia Freeland, on the Front Line against Putin,” emphasized that “she in particular is the one, who from the beginning of the conflict, has maintained direct contact with the government of the Ukrainian president Volodymyr Zelensky.”

The newspaper also reports that a “Canadian diplomatic source even affirms that she was one of those who pressed the United States to adopt the decision to target the Russian Central Bank, to deprive the regime of billions of reserves in foreign currencies; that she also maneuvered to exclude many Russian banks from the Swift interbank platform, an essential cog in global finance.” These facts are also confirmed by the Globe and Mail.

Is a reminder necessary that Ms. Freeland is originally from Western Canada and is MP for Toronto-Centre? Can you imagine a better representative of the oil companies and their financiers on Bay Street? •

This article first published on the L’aut’journal website. Translated by David Mandel.

Pierre Dubuc is the editor of L’aut’journal, that identifies itself as independent, worker (ouvrier), and popular.