COP26: Trade Unions Must Fight for a Socialist Transition to Renewables

The UK government is hosting the 26th United Nations Climate Change “Conference of the Parties” (COP26) in Glasgow from 31 October to 12 November 2021.

The Intergovernmental Panel on Climate Change (IPCC) was formed in 1988. Its latest report to the UN in August of this year contains even starker warnings for the Earth’s climate than previously, unless decisive action is taken to cut greenhouse emissions. Without this, there is little prospect of keeping an average global temperature increase below the 1.5 to 2 degrees Celsius target in the 2015 COP21 Paris Agreement.

This was the first time an agreement had been reached on target reductions but it excluded major polluting industries like aviation and shipping and was devoid of any mechanism for implementing the targets. This reflects the global capitalist consensus that it is market mechanisms that will make the adjustment from fossil fuels to a zero carbon economy. This is despite the warning of Lord Stern who famously described climate change as “the biggest market failure in human history.”

Articles in the pages of The Socialist and Socialism Today have pointed out that it is capitalism’s insatiable pursuit of profit that has led us to this situation. Capitalism has shown itself unwilling and an actual impediment to the action on the timescale and scope required. An article published by Trade Unions for Energy Democracy (TUED) gives recent evidence of how renewable energy companies are “party to a race to the bottom, capitalist dynamic.”

It cites the use of forced Uyghur labour in China-based solar companies and the ‘off-shoring’ of manufacturing for the Scottish wind industry. The large wind and solar companies prop up a market architecture that is sucking in huge amounts of public money to guarantee profit margins. The report is quoted as saying “these companies have not just gone over to the political dark side, they helped design it.”

While richer governments of US and Europe talk up their climate commitments, the solutions proposed will not fix the climate crisis. UK plans to transition to renewable energy are reliant upon an unprecedented wave of resource extraction from ‘Global South’ countries. Intensifying the mining of so-called transition metals and minerals used to produce green technologies such as solar panels, wind turbines and electric vehicle batteries, is devastating communities from Chile to China. 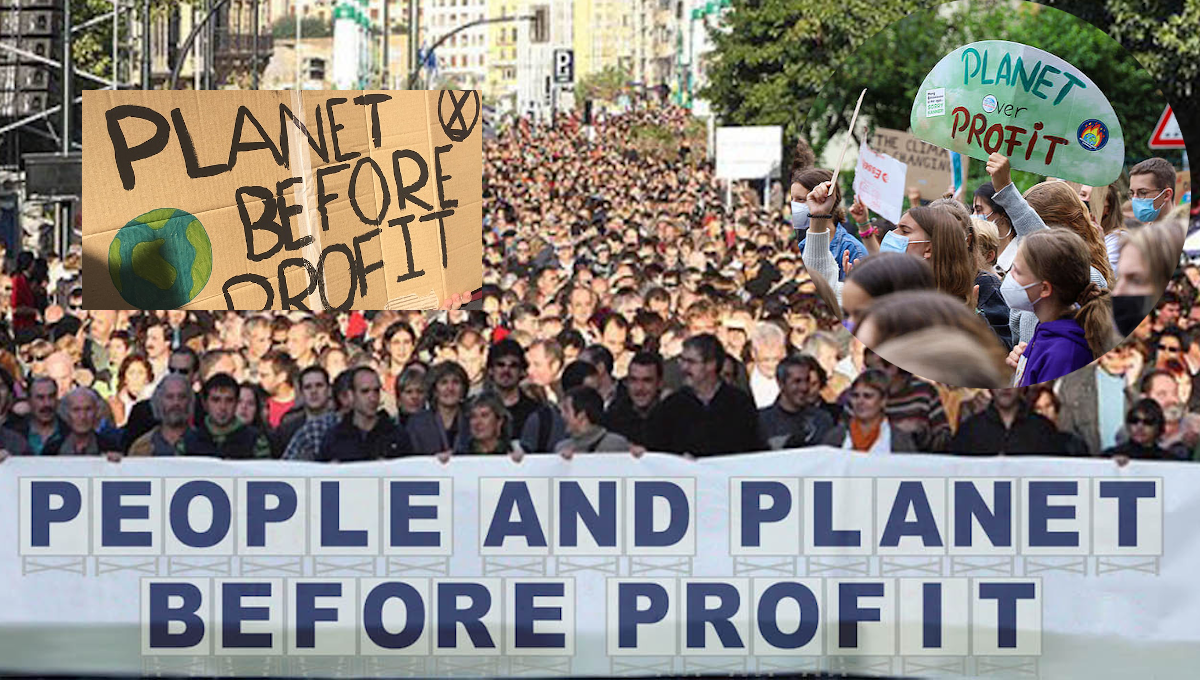 It is capitalism, including the giant mining companies, that expects to mine its way out of the crisis at the expense of the livelihoods and lives of workers in the world’s poorest regions. At the same time, the continued extraction of metals with the burning of fossil fuels will accelerate warming of the Earth’s climate with consequences for the whole of humanity.

The failure of government at a global and nation state level to take action on climate change has produced protests the world over. Greta Thunberg’s public stance inspired protests and strike action of school and college students in towns and cities across the world. There have been acts of civil disobedience against airport expansion, fracking, road developments, nuclear expansion and various threats of environmental degradation.

But the actions of Extinction Rebellion and Insulate Britain can never be an effective substitute for a mass movement of workers and unions demanding rights and job protection in a transition.

Climate change is a class and a trade union issue, and trade unions have a vital role to play in placing the interests of workers at the heart of the debate about what is meant by a ‘just transition’. Trade unions and workers in energy intensive industries have a vast knowledge and skills with the industrial power that will be needed to resist the bosses’ attacks in these sectors.

This knowledge, skills and power can also be brought to bear in the fight for the guaranteed protection of jobs, pay and conditions in a transition. Building on the example of the Lucas Plan, we have seen shop stewards and union members involved in the fight at Rolls Royce and GKN developing plans for alternative methods of production. Plans that begin to explore how to apply the technology under workers’ control and self-management and diversify into socially useful forms of production.

The Trades Union Congress (TUC) held its congress in September and carried two motions on the question of climate change. It has been a struggle for many years of TUC affiliates to table motions and start a serious debate.

Motions are dismissed by the big industrial unions as posing a threat to jobs in the energy and energy intensive sectors. The second motion from Aslef and TSSA went through unanimously while the first motion moved and seconded by GMB and Prospect was opposed by several unions but went through with the block votes of the three largest unions.

The motion that passed acknowledges the threat to humanity posed by climate change. It proposes several welcome reforms such as statutory provision for workplace environmental reps and government support for the steel industry, but is largely about maintaining the status quo. It talks of maintaining a balanced energy mix, which is a code for preserving levels of gas production, and building a new generation of nuclear reactors.

It rightly condemns the reliance of the UK economy upon gas imports, the import and manufacture of renewable components and imported steel. While it talks of the need for a ‘just transition’ for workers in high-carbon sectors, where nobody should be left behind, there is a gaping hole when it comes to the mechanism for making this happen. It is silent on public ownership and how this will be essential for the economic transition necessary.

The mobilisation for the COP26 protests have official support from only a handful of unions, notably excluding Unite, GMB and Unison. This does not disguise the work by trade union members, shop stewards, trade union branches and trades councils in organising local protests on the 6 November, or for the national mobilisation in Glasgow on the same day.

For trade unionists and socialists there can be no compromise in a militant fight against the Tories’ and bosses’ offensive and their plans to make workers pay the price for the pandemic.

A myth has been created that defending members’ jobs and conditions is in conflict with taking action on climate change. This is a myth that needs to be exposed. It is not climate change that poses a threat to the jobs and future of workers in oil, gas, arms manufacture, ceramics, steel, car production, nuclear industry and aviation.

Driven by their need to maximise profits, the threat comes from the employers’ business plans which involve massive job loss, closures, attacks on pay and conditions, threats to the viability of local communities and off-shoring to countries with cheaper labour costs.

Trade unions have the collective power and expertise to fight these attacks and develop an industrial strategy that takes a ‘just transition’ beyond an empty slogan into an industrial and political strategy that workers and trade unions can unite and mobilise around. These arguments need to be taken into every workplace, community, trade union branch and environmental campaign.

Scottish railway workers and refuse collectors have voted to strike during the COP26 summit in Glasgow, in long-running pay disputes.

The RMT transport workers’ union could halt all train services in Scotland from November 1-12 and planned action by refuse workers in GMB was backed by 97% of workers over the latest pay offer from Scottish local governments.

The RMT says that a ballot of more than 2,000 members had backed plans to strike, with 84% in favour of the action over a refusal by Scottish railway operator ScotRail and government agency Transport Scotland to negotiate a pay increase.

RMT members working on the Caledonian Sleeper service, which runs between London and Scottish cities, also plan to strike during part of COP26 over a pay dispute with the service operator Serco. 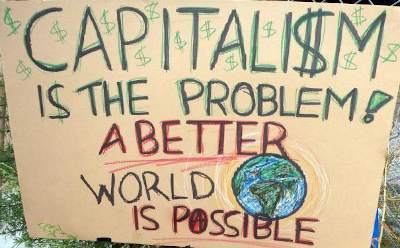 This is what is needed – mass working-class action, including demos, strikes, walkouts and occupations to confront capitalism.

We call for workers’ collective action. We say support and build industrial action by workers during and beyond COP26 and fight for the trade union leaders to coordinate the struggles.

The Socialist Party is helping to organise the National Shop Stewards Network forum during the COP26 summit to put the issue of a workers’ transition based on public ownership and workers’ control on the agenda.

This article first published on the Socialist Party.org.uk website.

Chris Baugh is active with the Socialist Party UK.