Nuclear Arms Race in the Asia-Pacific Region: Denuclearize as Solidarity with the People of Hiroshima and Nagasaki

I am honored to bring heartfelt greetings of solidarity to the people of Hiroshima and Nagasaki, and to the participants of this World Conference against Atomic and Hydrogen Bombs, from the Asia Europe People’s Forum (AEPF).

AEPF is a broad network of major regional and national civil society movements across Europe and Asia. It serves as a vibrant platform for movements, parliamentarians, and public intellectuals to strategize and work together on critical actions for peace and security, as well as social, economic, political, and climate justice.

Allow us to pay tribute to the Hibakusha (persons affected by a nuclear bomb). Since the bombing of Hiroshima and Nagasaki, their voices of experience and hope have fortified our awareness and resolve that humankind and the planet cannot co-exist with nuclear weapons and that these horrific weapons of mass destruction have to be totally abolished in our lifetime.

We cannot express enough our gratitude to the Japanese peace movements, like Gensuikyo, for their tireless efforts over the years to organize this conference and to mobilize public support for the elimination of nuclear weapons. 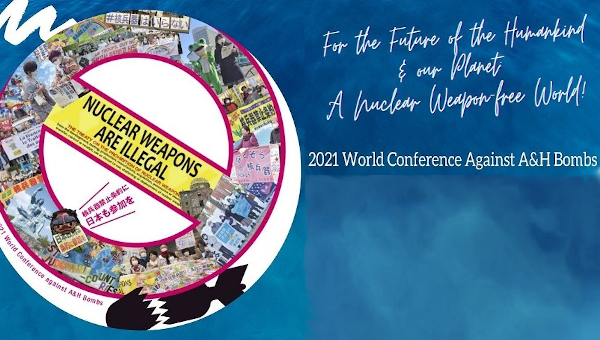 We thank the disarmament movements that brought the Treaty for Prohibition of Nuclear Weapons (TPNW) into being. The TPNW is indeed a radical step that puts activists in a stronger position in terms of international law. However, challenges remain.

It is no wonder that in January of this year, the Doomsday Clock was set by the Bulletin of the Atomic Scientists from 100 seconds to midnight, an alarm and wake-up call for humanity.

Furthermore, human security, our ecological systems, and the climate are all endangered by the emergence of intense competition between the US and China, with Asia as the centre of geopolitical rivalry.

At the AEPF Peace and Security Conference in 2006 in Kuala Lumpur, the following was foretold by security experts: “The United States would use the strategy of containment in the Asia-Pacific to forestall the rise of and growing power of China. This strategy could lead to war with China, and the implications to countries in the region, especially in East Asia and Southeast Asia, in the aftermath of a nuclear war, could be catastrophic.”

In 2011, the Obama Administration launched a program called “Pivot to Asia.” It entailed moving two-thirds of US naval forces to the Asia-Pacific and to surrounding China, locating 400 American bases from Australia to Japan, Korea, and across Eurasia to Afghanistan and India.

Thus Michael Klare and many leading security experts forewarned that the “United States and China have entered a period of intensified economic, political, and military competition that can only be characterized as a New Cold War, with a very real possibility of becoming a hot war – even a nuclear war.”

At the 2018 AEPF Peace and Security Conference in Berlin, Joseph Gerson warned that a minor incident in the East or South China Seas could escalate into a major military clash between the US and China, creating widespread destruction in China and in nearby Japan and Taiwan. A major US-China military clash in the South China Sea or over Taiwan would likely involve American air and missile attacks on the Chinese mainland, China could face a threat to its strategic defense capabilities, and in response, place its nuclear forces on high alert – setting off a chain reaction of nuclear actions on both sides that could result in the actual use of atomic weapons.

We support Walden Bello’s argument on how to reverse the cold war and prevent a new and catastrophic war. He says that our first imperative is to revitalize our efforts to demilitarize and denuclearize the Asia Pacific region in the immediate future.

At the 13th Asia Europe People’s Forum held in May of this year, a biennial civil-society summit prior to the ASEM heads-of-state summit, the challenges and ways forward were discussed at Peace and Security workshops. The following AEPF campaigns/advocacies were identified:

The facilitation of these campaigns and advocacies is made possible by the unique character of AEPF’s work, which focuses on bringing together dynamic regional and national movements, as well as progressive parliamentarians and public intellectuals across Asia and Europe. The purpose is to discuss and strategize on actions with a common framework that will enable civil society networks to call for rapid responses from states, parliaments, and international bodies, and for the legislation and establishment of relevant policies.

Friends, the tasks we have are daunting, but they cannot be deferred. Noam Chomsky stated that while the pandemic is the foremost issue on all of our minds, what is vital now is robust internationalism to pay immediate attention to the perils of extinction: extinction by nuclear war, by climate catastrophe, and by social collapse due to neoliberal destruction of the social contract.

I am confident that we could ignite worldwide solidarity and collective action and organize our strength into compelling power, so that states cannot elude our demands and we can overcome.

Hence let me close by acknowledging the generations of peace movements and activists who have worked, since the bombing of Hiroshima and Nagasaki, for a nuclear-free, peaceful, and just world. In these seemingly desperate and dark times, you continue to give hope and to bring light. So, we thank you. •

Tina Ebro is the Co-Coordinator for Asia of the Asia-Europe People's Forum (AEPF).