For 11 days in May of this year, the world watched in horror as Israel’s missile onslaught on the civilians of Gaza went into full swing. According to the World Health Organization (WHO), this latest barrage on the strip resulted in the killing of 278, including 66 children, 39 women, and 17 elderly people, and the wounding 9,000. Nearly 17,000 residential and commercial units were smashed, displacing over 90,000 people.

Israelis targeted and caused widespread damage to some 30 health facilities, seven hospitals, and 11 primary care clinics, in addition to Gaza’s only COVID-19 testing facility, killing its director. Other facilities destroyed were two Palestinian Red Crescent ambulance stations and a clinic caring for mothers and infants.

The bombing also resulted in electricity outages affecting the functioning of medical facilities, while causing damage to the water and sanitary infrastructure, including wastewater networks and the seawater desalination plant.

An industrial area, employing 1,500 people, was targeted repeatedly, causing an estimated loss of $20 to $25-million. When it was under bombardment, fire fighters were called in. When they arrived, they were also targeted, leading to more fires and more damages. 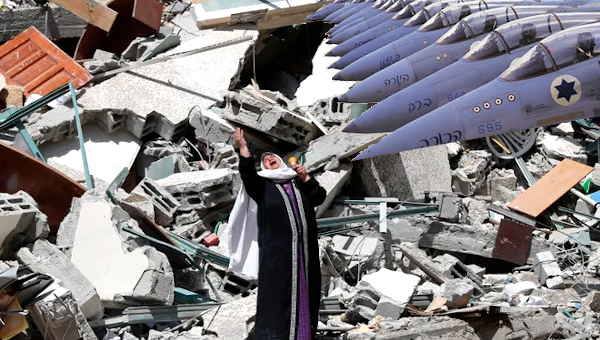 Gaza, a tiny strip of land with a population of 2 million ended up becoming even more “uninhabitable” than before, according to the United Nations report.

Some 80 Israeli jet fighters were deployed in the operation, including the most advanced F-35s that Israel received from the US. These most advanced fifth-generation fighters were used on Gaza because it served to test F-35 fighters and their pilots in real war action, using Gaza homes as targets. It was the baptism of fire for the US Lockheed Martin’s F-35, the production of which Italy also participates in.

This is how Israel went into extensive attacks on Gaza, characterizing it as “self-defense.” When facing a barrage of questions, the Israeli standard reaction is, “What would you do?” and then they shift the blame: “We didn’t kill their children, they made us do it.” When that ploy fails, they switch gears by crying, ad nauseam, “anti-Semitism”, hoping to put the adversary on the defensive. Their propaganda machine operates at full throttle, trying to obscure the truth through disinformation, misinformation and decontextualization.

Israeli army spokesman Lieutenant Colonel Jonathan Conricus misled international media outlets into publishing false news that the Israeli military was preparing a ground invasion of Gaza. Later, it was revealed that this was a deliberate ploy intended to bring Hamas out into the open for easier targeting. When asked, Conricus claimed it was an “honest” mistake.

They even posted an old video from Syria, claiming it was from Gaza. It showed a rapid firing of rockets from what looked like an apartment building in Gaza, thus trying to “prove” that Hamas was using civilians as human shield. The tactic failed because the same video had been posted on YouTube back in December 2019, indicating that it was filmed in a northern Syrian city.

Such attempts by Israeli hasbara (a Hebrew term meaning public relations efforts to defend a state’s interests) to whitewash their war crimes and spin the narrative of Gaza went belly up in the face of global protest, following graphic images of massive destruction and the shattered bodies of children in Gaza.

In response, hundreds of thousands of people took to the streets in the cities of Livorno and Milan (Italy); London, Birmingham, and Liverpool (UK); Adelaide and Sydney (Australia); Frankfurt and Berlin (Germany); and Paris (France). In London, approximately 180,000 people turned out, making it the largest pro-Palestine protest in British history. 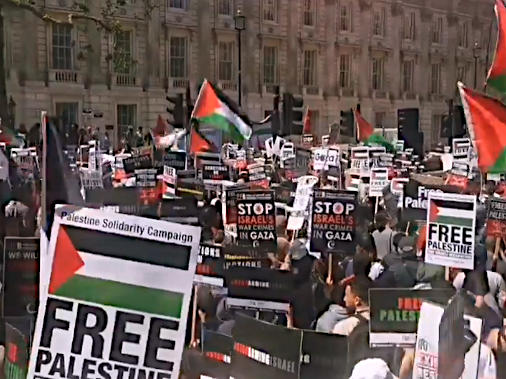 In the US, thousands of demonstrators gathered outside the Lincoln Memorial in Washington, DC, condemning the US administration’s funding of the Israeli regime. They called for sanctions against Israel, demanding the US government allow the International Criminal Court (ICC) to carry out investigations into Israeli war crimes. Such demonstrations also took place in the African streets of Morocco, Tunisia, Kenya, and South Africa.

In the US Port of Oakland, dockworkers refused to unload an Israeli ZIM-operated cargo ship, forcing the vessel to spend over two weeks out at sea, unable to dock. It was part of an international picket movement at port cities around the world. Similarly, Italian dockworkers in the ports of Livorno and Genoa refused to load the cargo after discovering that it was a shipment of high-precision weapons and explosives bound for the Israeli dock of Ashdod.

Dockworkers in the South African port city of Durban also refused to offload cargo from an Israeli container ship belonging to Israel’s Zim Integrated Shipping, following a call from the Palestine General Federation of Trade Unions.

In the British city of Leicester, members of Palestine Action climbed up onto the roof of a drone manufacturing factory belonging to UAV Tactical Systems, a subsidiary of Israeli weapons manufacturer Elbit Systems and the French firm Thales. They barricaded gates “to prevent any more British-made drones being sent to commit atrocities in Gaza.”

And in the British port town of Runcorn, activists “stormed, scaled, and occupied” an aerospace factory that supplies parts for drones produced by Elbit Systems. Production at the factory was brought to a standstill for two days.

More than 600 international musicians signed an appeal under the banner “Musicians for Palestine” calling upon their peers to boycott performances in Israel. The letter said, “We call for you to join us in refusing to perform at Israel’s complicit cultural institutions, and by standing firm in your support of the Palestinian people and their human right to sovereignty and freedom.”

The Irish parliament passed a historic motion condemning the “de facto annexation” of Palestinian land by Israel. This makes it the first European Union country to take such a position. At the same time, the Sinn Fein party submitted a petition to the Irish Department of Foreign Affairs calling for the expulsion of the Israeli ambassador. It was supported by more than 88,000 people.

Meanwhile, the City Council of Belfast (Northern Ireland) approved a motion calling on the governments of the UK and Ireland to expel Israeli ambassadors. It said normal cooperation with Tel Aviv is “untenable” at a time when “a growing list of human rights organizations has determined that Israel’s actions amount to apartheid.”

In Belgium, the Parliament of the Brussels–Capital Region adopted a resolution condemning the Israeli occupation of Palestine and recognizing the State of Palestine, urging the government to impose economic sanctions on Israel and to suspend all Belgian economic missions to Israel.

In Australia, more than 720 journalists and media practitioners signed a letter criticizing coverage of the fighting between Israel and Hamas. Consequently, a dozen journalists at Australia’s two largest broadcasting corporations were asked by management to remove their signatures on threat of their contracts not being renewed.

In Canada, journalists who were frustrated with their media’s coverage of Palestinian issues wrote an open letter, protesting that some style guides ban the use of the word “Palestine.” The letter addressed to Canadian newsrooms and journalists was signed by over 2,000 journalists. As a result, some of them were prevented from covering Palestininian issues.

The Seattle teachers’ union (SEA) passed a resolution expressing solidarity with Palestine, endorsing the Boycott, Divest, and Sanction (BDS) movement, and demanding an end to collaboration between the Seattle Police Department and the Israeli military. One of the union members, Emma Klein, said, “As a Jewish educator, I am proud to be a member of SEA. Our Representative Assembly took a bold and vocal stand against injustice.”

For the time being, with the nominal ceasefire, Israel has stopped its deadly bombardment of Gaza, but it is not the end of Israel’s systemic oppression, ethnic cleansing, dispossessions, demolition, settler colonialism, and apartheid. Such conditions are bound to give rise to resistance on the part of Palestinians. The UN coordinator for the Middle East Peace Process, Tor Wennesland, warned that the ceasefire remains “very fragile.”

After all, it is not the first ceasefire. We are told by Michael Lynk, UN rapporteur for human rights in the occupied Palestinian territory, that “[t]he events in Gaza, East Jerusalem, the West Bank, and also across Israel, are a calamitous repetition of what we have all previously witnessed in 2018, 2014, 2012, 2008-09, 2000, 1987 and further and deeper into the tragic history of the Palestinians.”

Consequently, we see thousands of Israeli ultra-nationalists marching through occupied Jerusalem streets, waving Israeli flags while chanting racist and genocidal slogans against Palestinians, such as “Death to Arabs,” “May your village burn,” and “A second Nakba is coming.”

What else can one expect when they are led by the current Prime Minister who is reported to have said, “I’ve killed many Arabs in my life and there’s no problem with that.”

The New York Times probe found that the Israeli bombardment of Gaza could amount to a war crime. Experts told the US newspaper that the Israeli regime has conducted a series of bloody airstrikes in Gaza neighborhood “without warning” and “with limited intelligence about what they were attacking.” Experts told the Times that the Israeli military did not provide evidence of the alleged Hamas command center and that it had no information about its exact location and its size.

That is why Gideon Levy, a prominent Israeli journalist and author, wrote that hasbara isn’t fooling anyone – except Israelis. Quoting the late Israeli ambassador Yohanan Meroz, he said, “We’ll shout terrorism, we’ll shout anti-Semitism, we’ll scream delegitimation, we’ll cite the Holocaust, we’ll say Jewish state, yet there are some things that are not ‘hasbarable.’ One of them is Israel’s treatment of the Palestinians.” •

Nizar Visram is Tanzanian writer, currently based in Ottawa, Canada. He can be reached at nizar1941@gmail.com.