Whither Farmers’ Struggles in India?

The ongoing struggle of farmers in India is the most significant mass mobilization in decades and represents the biggest challenge to the government of Narendra Modi since it first came to power in 2014.

The three agricultural reform laws forced through Parliament during the pandemic lockdown provoked this wave of protest. Modi’s Bharatiya Janata Party (BJP) insists that those laws are necessary to modernize an archaic and outdated system of farm production. Farmers, however, rightly see the dismantling of regulations, price controls, and public procurement commitments as a threat to their livelihoods.

They fear that opening up the sector to corporate agribusinesses and financial interests will lead to greater polarization of landholdings. This in turn will cause a large-scale displacement of farmers and labourers into an informal sector that already accounts for more than 90 per cent of the total workforce and is incapable of providing enough employment or remuneration. 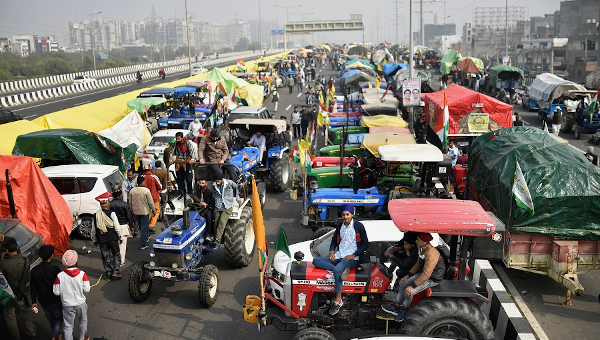 Demand to Repeal the Laws

Since late November 2020, hundreds of thousands of farmers, mainly from Punjab, Haryana, and western Uttar Pradesh, have camped on the outskirts of Delhi, disrupting the main roads into the capital. Rejecting the government’s offers to temporarily suspend the new laws, they have remained steadfast in demanding their repeal.

On January 26 this year, India’s Republic Day, some five hundred thousand people went on a procession along designated routes that had been agreed upon earlier. It was meant to symbolize the fact that the day belongs to them as much as to anyone else. However, a few thousand were surprisingly able to take an unblocked, unplanned route. They ended up at the Red Fort in the center of the city. A Sikh religious flag was hoisted, and there were some clashes between protestors and police.

Prime Minister Narendra Modi broke his silence to declare the Red Fort incident an insult to the country and insist that the reforms proceed unabated. The police arrested hundreds of protesters and brought charges against journalists reporting on the events. The authorities then moved to blockade the farmers’ encampments with razor-sharp concertina wire, steel spikes implanted in the ground, and concrete walls.

However, when the Uttar Pradesh state government threatened to evict farmers by midnight of February 28, thousands more flocked to the occupation sites after a leadership appeal, first from Uttar Pradesh and then from other states like Punjab and Haryana. At a critical point, just as the government was planning to go on the offensive, the farmers’ struggle got a powerful second wind. The occupations and resistance continue to this day.

How might one assess the chances of success for the farmers’ movement? One way is to compare it to the last mobilization of a comparable scale: the Bombay textile workers’ strike of 1982-83, when 224,000 of the city’s mill workers went on strike. They shut down the industry, raising demands for increased wages, improved work conditions, and an end to restrictive labour laws.

Those laws denied them the right to choose another, more militant union led by Datta Samant in place of the only officially recognized union, the Rashtriya Mill Mazdoor Sangh. Led by the Congress Party and supportive of the owners, the established union had done little or nothing for the workers.

The 1982-83 strike was essentially a defensive reaction to terrible conditions rather than an expression of rising class consciousness that might shift the relationship of forces between labour and capital.

There were more than 58 million workdays lost as a result of the strike, compared to the 29 million workdays in the course of the British miners’ strike of 1984-85. However, in spite of their numerical strength, objective circumstances were not in favour of the workers.

The strike was directed against big and medium mill owners, and, indirectly, against the state. Many mill owners were looking to shift production to power looms outside the city and expected substantial compensation through land sales. For its part, the Maharashtra state government had its eyes on deindustrializing the city so that it would become a commercial-financial center. The state’s intransigence also reflected its awareness that any concession to the Samant union would encourage militancy by workers in other industries.

For India’s national government, breaking the strike also fit into its larger economic plans. The country’s shift toward an economy that would be more open to global capital, with greater privatization of public enterprises and a growing service sector, was already in progress by the 1980s, before the 1991 economic crisis often seen as a watershed for India’s neoliberal turn.

The Bombay struggle was heroic but isolated, despite some public sympathy from ordinary citizens of the city. It lacked both strong backing from other sections of the working class and cross-class support. The major trade union federations basically left it isolated, fearing possible membership desertions to Datta Samant’s union if it should triumph.

However strong it may have been, the 1982-83 strike was essentially a defensive reaction to terrible conditions rather than an expression of rising class consciousness that might shift the relationship of forces between labour and capital.

That wider shift would have taken place if the 1974 railway strike had been successful. That strike came at the crest of a more general wave of labour militancy in India. It was the largest ever strike in the public sector up to that point, involving 1.7 million people or 70 per cent of the total workforce employed by the railways. The unions called it off following twenty days of action between May 7 and 28. The authorities had arrested thousands of workers, with many more suspended, and called in armed personnel to begin running the trains.

The railway strike began when JP Narayan launched a mass movement. Narayan declared that India’s youth would be the catalyst for a "Total Revolution" against corruption, class, caste, and communal antagonisms. This agitation spread through the urban areas of north India. It was the first anti-Congress mass movement of its kind since India had won its independence, drawing together most of the opposition parties.

This agitation and the railway strike played an important part in motivating Congress leader and prime minister Indira Gandhi to declare a state of emergency in June 1975, suspending basic liberties. The end of "the Emergency" and the defeat of Congress in the 1977 elections that followed did not result in an upswing in working-class militancy, although social movements of various kinds did arise.

The 1974 railway strike was the largest ever strike in the Indian public sector up to that point, involving 1.7 million people or 70 per cent of the total workforce.

Civil liberties groups sprang up in different provinces to defend human rights against violations by the state or other actors. These organizations sought to build national networks in a new context. Courts at all levels of the Indian state were now seeking to atone for their supine behaviour during Indira Gandhi’s Emergency by entertaining public interest litigations of different kinds.

Turning to the farmers’ struggle today, the numbers at various times have reached five hundred thousand or more, since there is large-scale movement back and forth between the occupation sites and villages every few days. The period of sustained blockage at the borders has now lasted over four months. When compared to the textile strike of the 1980s, several significant differences are apparent.

The farmer agitation is one aimed directly against Modi’s government at the center, bypassing state administrations, and indirectly against the agricorporates. With the central government as the main opponent, it has had a much greater nationwide impact, attracting broad sympathy across the country. After all, almost half of India’s population is either engaged directly in agriculture and related sectors or in providing goods and services that largely depend on farmer incomes.

Cross-occupational sympathy is much greater than it was for the textile workers’ strike because the striking farmers have social links with the armed forces, police, and lower-level government bureaucracies, not to mention urban wage earners of various kinds, from the self-employed to domestic workers. In contrast with the experience of the textile workers, its effect has been to put the central government somewhat on the defensive.

The different composition of the farm movement is also striking. The action is led not by those who are separated from the means of production or those whom we can call part of the classical working class, as it was in 1982-83. Rather, it is led by the peasant equivalent of what is sometimes called the petty bourgeoisie. This does not mean that the struggle is not progressive – it certainly is.

During the 1970s and ’80s, and even in the ’90s, rich Indian farmers led farmers’ movements and were an important force behind certain regional political parties. However, with the growing agrarian crisis, three developments seem to have taken place.

Firstly, the power of regional parties has been eroded. Secondly, the mobilizing capacity and leadership of these wealthier strata has to a significant extent given way to that of small- and medium-sized farmers organized in unions that are often led by left-wing forces, particularly in Punjab. Thirdly, greater migration and greater precarity of work among the lower and weaker sections of the landholding peasantry have made farmers acutely aware of the dangers of corporatization and the loss of public procurement and the minimum support price.

Almost half of India’s population is either engaged directly in agriculture and related sectors or in providing goods and services that largely depend on farmer incomes.

The chances of this movement achieving success are certainly higher than they were for the textile workers, although victory is by no means certain. One major difference is that many textile workers had to return to their villages in their home states just to survive, leaving a considerably smaller proportion to seek financial support and solidarity through demos, flash strikes, etc. from workers in other industrial and service sectors in Bombay and Maharashtra. In the current struggle, the lines of communication, material replenishment, and numerical reinforcement between the rural backstop and the sites of occupation are much closer and stronger.

Can it, therefore, succeed on its own? Even success will not mean that right-wing Hindutva (Hindu nationalist) hegemony will have been seriously undermined. Nor will it shift the general relationship of forces between capital and labour to the extent needed. For that to happen, we need a much longer and wider collective struggle and the emergence of a national political alternative.

Certainly, if it is successful, the farmers’ movement will halt for some considerable time the neoliberal corporate strides into Indian agriculture. Defeat, on the other hand, will accelerate that push and further consolidate the ties between the BJP and capital.

The key is not just continuing the occupation, or mounting periodic demonstrations, marches, and solidarity events, but mass strike action. This form of action would hit directly at the authority of the government and affect their big-business backers where it hurts the most – namely, in their pockets.

The central trade union federations – barring, of course, the BJP-controlled Bharatiya Mazdoor Sangh – have extended support to the farmers’ struggle and carried out solidarity actions. But these federations are controlled by their respective party-political masters, which makes it harder to forge basic unity among workers. Indeed, the way that more than forty farm unions and other bodies have managed to work together should be an object lesson for the trade union federations. •

This article first published on the Frontier Weekly website.

Achin Vanaik is a writer and social activist, a former professor at the University of Delhi and Delhi-based Fellow of the Transnational Institute, Amsterdam. He is the author of numerous books, including The Painful Transition: Bourgeois Democracy in India.