We, the undersigned labour organizations in Canada, call on the Government of Canada in the most urgent terms possible, to immediately suspend bilateral trade of all arms and related materials with the State of Israel.

From May 10 -18, Israeli military attacks in the Gaza Strip killed over 220 Palestinians (including more than 60 children), wounded 1600 and displaced more than 52,000 people. Several trade unions in Canada forcefully condemned the Israeli military attack on the Al-Aqsa Mosque and Israel’s imminent confiscation of Palestinian homes in Sheikh Jarrah, and violence that preceded the vicious and disproportionate attack by Israeli forces on Gaza. The Canadian Labour Congress further recognized that “Ongoing evictions and Israel’s illegal occupation is in blatant violation of international law and amounts to the ethnic cleansing of Palestinians.” 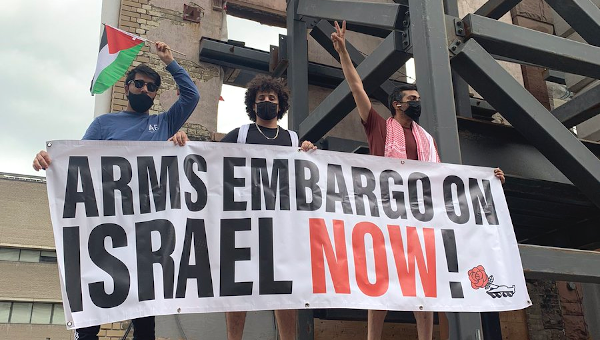 Since 2015, Canada has exported $57-million worth of weapons to Israel, including $16-million in bomb components. The ongoing bombing of Gaza, including of civilian sites, should compel Canada to reassess all Israel-bound arms exports and imports, including the recently signed contract with Elbit Systems, which supplies 85% of drones used by the Israeli military to monitor and attack Palestinians in the West Bank and Gaza. Yet Canadian governments have repeatedly put arms deals with Israel ahead of the rights and lives of Palestinians. As the UK-based Campaign Against Arms Trade points out, arms sales to Israel “do not just provide military support, they also send a clear sign of political support for the daily abuse that is central to the occupation.”

In a news release on May 18, 2021, several United Nations Special Rapporteurs stated:

“The underlying reality is that there is an occupying power, with one of the best equipped militaries in the world, ruling over an occupied people who have the right to be freed from an unwanted and protracted alien regime. … This struggle is deeply unequal. The 54-year-old Israeli occupation – already the longest occupation in the modern world – is becoming even more entrenched and even more abusive of fundamental human rights.”

In January 2021, B’Tselem (the Israeli Information Center for Human Rights in the Occupied Territories) released a report unequivocally stating that Israel is an apartheid state. Human Rights Watch, in its April 2021 report: A Threshold Crossed: Israeli Authorities and the Crimes of Apartheid and Persecution, concluded that Israeli authorities are committing the crimes against humanity of apartheid and persecution. The report called on the member states of the United Nations to “Condition arms sales and military and security assistance to Israel on Israeli authorities taking concrete and verifiable steps towards ending their commission of the crimes of apartheid and persecution.” Even the President of South Africa remarked on May 20, 2021 that the situation in Palestine brought back terrible memories of the apartheid era in his own country.

As members of the labour movement in Canada, we call on the Canadian Government to stop allowing Israel to act with impunity and to end our complicity in this ongoing violence. We demand that the Government of Canada immediately suspend bilateral trade of all arms and related materials with the State of Israel until Palestinian human rights are respected, the siege on the Gaza Strip is lifted, and Israel ends its illegal occupation of the Palestinian territories. •

Labour4Palestine is a pan-Canadian network of labour activists who work to deepen solidarity with Palestinian workers and people in their struggle for liberation.