If COVID-19 has taught us nothing else, it is that we need a new approach to caring for each other in this country. And there is no better time to raise these issues than in the months leading up to an election. We need to insist on an alternative path, one based on a new vision of the role of care in Canada.

We are reaching out to people who recognise that there is a severe care crisis in Canada and who agree that the federal government should take leadership in ensuring that the multiple deficiencies exposed by the pandemic are addressed. The crisis has had terrible consequences for so many, including those in long-term care. Many of the deficiencies have weighed heaviest on women, racialized and Indigenous populations and those with disabilities. 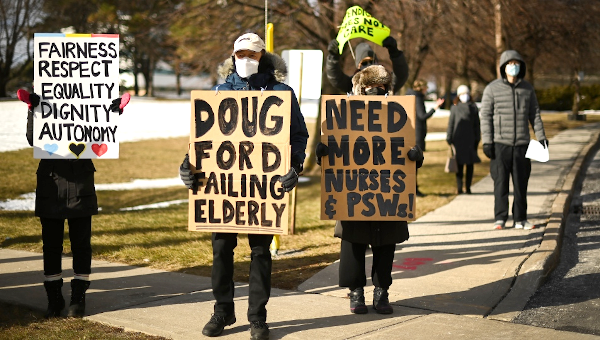 Although nuanced and complex ideas about care cannot be easily summarized in one document, the following statement describes the principles for achieving a just recovery that addresses the crisis in care for both those who need and those who provide care.

This statement is an expression of a general framework, rather than an ordering of priorities. It is a call to recognize that good care is crucial to our health and well-being as individuals and as a society; it is the critical social infrastructure that delivers overall economic stability and growth; and it is a shared responsibility, not just a personal one.

This requires a shift from thinking of care as an expenditure to understanding it as an economic driver through investment in people and good jobs. With this shift we create a healthy society that can maximize its potential and excel in new ways.

Future budgets and public policies of all governments must address these core principles.

These principles run counter to many of the assumptions framing past economic policy decisions. But we challenge those assumptions, including the position that the care economy is too expensive for major investments from the public purse. We already pay for social infrastructure as individuals, but with little or no control over quality, availability, and quantity of care. Canada’s public spending on social programs is inadequate and significantly below the average of other high-income countries, even that of the US.

We also challenge the assumption that expenditures on care are a cost to the public purse. Rather, these are investments that stimulate the economy and safeguard our health in ways that allow us to maximize our human potential while generating higher public revenues.

We must not lose sight of the lessons learned from the pandemic. All budgets and policymaking should be based on these principles – at all levels of government. The federal government can and must lead the way by providing funding that is unequivocally conditional on meeting standards for decent work and for care, for all residents of Canada. Just as we need a ‘green pivot’, we need to pivot and reframe the provision of care in our society.

Rationale for the Care Economy: Make the Next Election an Election on Care

The COVID-19 pandemic highlights the failure of governments in Canada to adequately deal not only with the care emergencies of a pandemic, but also with the long-standing gaps and deficiencies in care that precede this crisis. COVID-19 exposes the inequities that pervade our country: inequities in access to health and to care, especially in relation to areas such as sick leave, medications, housing, and decent, safe working conditions. It also highlights the persistent and growing inequalities in income and wealth. 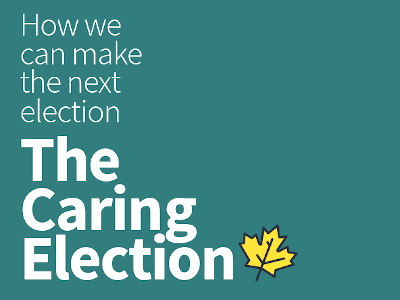 The ‘care sector’ is extensive and includes direct personal care in the public and private spheres, government funded social services and protective policies, and the related government programs that support care work. It includes the people who provide the paid and unpaid care labour and those needing support and care.

The chronic failure to adequately deal with care issues reflects several assumptions that must be challenged.

Care issues are not like the crucial sectors that require government support because they drive the economy, sectors such as resources, finance and manufacturing, gas, and mining.

This assumption ignores the real contributions of the care sector as an economic driver. Health care and education alone, at 12.3% of GDP, contribute more to the economy than other major sectors, such as manufacturing, oil and gas, and mining. The care sector is also labour intensive and accounts for at least 21% of all paid labour. These numbers do not include another crucial contribution to the economy, unpaid labour in care work.

The care economy also has a crucial role in maintaining economic stability through its role as an automatic stabilizer that can serve to inhibit the dramatic economic fluctuations that occur with economic downturns. Care work does not decrease when there is a business downturn and the continued expenditures/incomes in this sector can help maintain stability without having to invent extensive new temporary programs each time there is a crisis.

The care sector is critical ‘social infrastructure’ that needs public capital expenditure and other public support, much in the way that utilities and transportation do. Public child care centres, long term care facilities, public pharmacare, and extensive community-appropriate care supports and services for all Indigenous communities are some of the most obvious examples of deficits in public infrastructure. These are all areas that have significant potential for providing economic stability while meeting current care needs and improving future outcomes and potential. Moreover, they are central to maintaining a healthy labour force.

Governments cannot afford to provide for care needs, especially given an aging population.

Since 1995 Canadian governments have consistently spent less than the average of OECD (world’s wealthy) countries on social services. While Canada used to be one of the leaders in public expenditures on people, it is now a laggard. Canada’s social spending as a share of GDP is 2% less than the average of all wealthy countries. This is a large difference, amounting to $46 billion a year more that could be spent on social services if Canada even reached the average OECD expenditure rate.

Clearly there can be enough money when it is considered necessary, as the spending in response to COVID-19 and earlier economic crises demonstrates. How much we spend is a matter of values. Not spending on care issues is both morally wrong and damaging to the economy.

Care work can be undertaken either by unpaid work in the home, mostly done by women, or by paid workers, also mostly women who are largely an underpaid labour force that relies disproportionately on recent immigrant, migrant workers, and racialized women.

While care workers, both paid and unpaid, have been heroic during the pandemic, and lauded for their work, several issues need to be understood. A significant one is that the conditions of work simply do not attract enough workers. Among other things, this underlines the need for access to status for migrants who perform much of care work and are more exposed to exploitation. Another is that unpaid work simply cannot take up the slack, even if there are relatives and friends willing to do so.

The crisis in care has reached such dramatic proportions that governments need to provide more than temporary fixes. They need to immediately increase both the quantity and quality of paid work, and ensure that these workers are appropriately trained and compensated. Altogether people and governments need to act on the pandemic-revealed recognition that the conditions of work are the conditions of care.

Planning for a post-pandemic recovery needs to build resilience in the economy so that insights gained from the pandemic are not lost when vaccines are widespread and the present crisis diminishes. In care homes, for example, declining death rates in the wake of vaccines do not mean the sector is safe for those who live, work and visit in them. Radically improved care is crucial for families supporting those needing special care, and for people who need distinct services.

This is the critically urgent case for Indigenous communities, migrants, people with disabilities, and those with addictions. Governments must also act to support young people whose care and education have suffered during COVID-19, and to support parents struggling to find affordable, quality care for their children. The future requires access to high quality educational and training opportunities, from early learning and childcare to post-secondary education and skills upgrading.

It’s Time to Invest in the Care Economy

For the past year, our governments emphasized that we are all in this together. We would add that to get out of this together we must care for each other. We need federal leadership to carry these hard-earned pandemic lessons into a recovery by investing in a care economy that supports both those who need and those who provide care. •

Marjorie Griffin Cohen is an economist and Professor Emeritus at Simon Fraser University. She is one of the founders of The Care Economy.ca.