The purpose of the Glasgow Agreement is to reclaim the initiative from governments and international institutions and create an alternative tool for action and collaboration, for the climate justice movement. Until now the climate justice movement has had a very big focus on pressuring governments to take action on climate, or to push for stronger international agreements within the framework of the UN Framework Convention on Climate Change (UNFCCC), such as the Kyoto Protocol in 1997 or the Paris Agreement in 2015. Meanwhile, emissions have continued to rise. Hence the Glasgow Agreement proposes that civil society initiate its own plan of action, no longer waiting for governments and international institutions to do so. We aim to use a vast array of strategies and tactics, including civil disobedience, to achieve the necessary emissions cuts to prevent a 1.5ºC temperature rise by 2100.

There are currently more than 150 organisations from around the world that have committed to the Glasgow Agreement! Here you can see a list of those participating publicly. The proposal for the Glasgow Agreement was presented for the first at the By2020WeRiseUp meeting in Iberia (Spain and Portugal), in February 2020, and at the By2020WeRiseUp meeting in Brussels, in early March. Other activists from organisations and grassroots movements around the world were consulted on the first draft. Our first assembly was at the end of March and since then Glasgow Agreement was built with dozens of organizations from around the world, with clear and open processes, where the only criteria for participation was willingness to participate. Our political discussion was frank and open, we converged where we could and diverged where we had to, to reach our final agreement. See glasgowagreement.net. 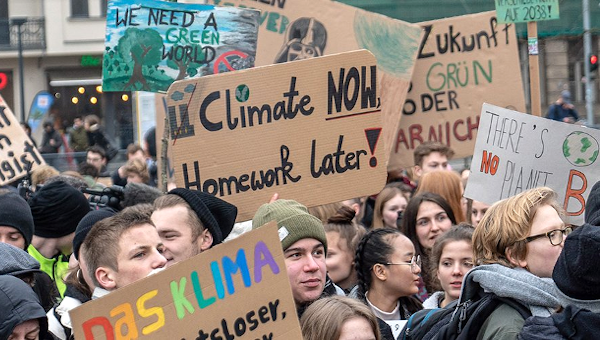 The institutional framework used by governments, international organisations and the whole economic system to address the climate crisis is failing in keeping global warming below 1.5 or 2°C by 2100. From its onset, developed countries and polluting corporations like the fossil fuel industry have orchestrated the repeated failure of this institutional framework. Instead, an illusion of climate action was created while decisive steps were delayed and greenhouse gas emissions were allowed to continue rising. As a result of decades of interference by these actors, weak commitments have been continually dishonoured, and thus the main institutional arrangements on climate change, namely the Kyoto Protocol and the Paris Agreement, have not produced the reduction in global greenhouse gas emissions required to halt the worst impacts of climate change. The Paris Agreement is only a procedure, and will not be able to achieve its stated goal of preventing the worst consequences of climate change.

Hundreds of governments, municipalities and organisations have declared a climate emergency. Massive protest in streets all around the world have repeatedly called for decisive action for climate justice inside the deadline of 2030, with scientific consensus on the need for a minimum cut by 50% of global greenhouse gas emissions within this period. To achieve any measure of these objectives, no new fossil fuel (coal, oil and gas) projects or infrastructure can be developed. A powerful climate justice movement needs new and enhanced tools to address these fundamental contradictions and to reverse the global narrative from institutional impotence into social power that brings about lasting change.

As such, the undersigned organisations1 and social movements assume:

1. The political framework for the required cuts and climate action will be that of climate justice, which is defined as a social and political demand that advocates for the redistribution of power, knowledge and wellbeing. It proposes a new notion of prosperity within natural limits and just resource distribution, advocating for a true connection between traditional and westernised knowledge systems. It calls for a public and participatory science to address the needs of humanity and of the earth, principally to stop the climate crisis;

2. Taking into their own hands the need to collectively cut greenhouse gas emissions and keep fossil fuels in the ground.

While participating in the Glasgow Agreement, organisations will maintain their main focus away from institutional struggle – namely from negotiations with governments and the United Nations;

3. The production of an inventory.

of the main sectors, infrastructures and future projects responsible for the emissions of greenhouse gases in each territory, that will be nationally and internationally publicised. There will be a technical working group to support and follow-up the creation of this inventory;

4. The production of a territorial climate agenda based on the inventory.

The climate agenda is an action plan, designed by communities, movements, and organisations working on the ground, that is informed by the inventory of the biggest greenhouse gas emissions sources (existing and planned) in its area of concern. It aims to set us on track for staying below 1.5ºC global warming by 2100 inside a clear framework of climate justice;

5. That political and economic noncooperation, as well as nonviolent intervention, in particular civil disobedience, are the main tools for the fulfilment of the Glasgow Agreement.

At the same time, we recognise that for oppressed groups and those living in more oppressive societies, it is much more difficult to partake directly in civil disobedience. The tactic of civil disobedience6 is only one of the tactics through which the Glasgow Agreement’s objectives can be fulfilled.

Additionally, we acknowledge that the strategy of civil disobedience has long been used, under various names, by many before us, particularly in marginalised communities and in the Global South, and we would not be able to join this struggle without these historical and contemporary sacrifices, and continuous action against climate change through struggles to keep fossil fuels underground and resistance to other industrial causes of global warming;

6. Support each other and coordinate to define their own local and national strategies and tactics on how to enact the climate agenda, and to call for the support of other member organisations of the Glasgow Agreement (nationally and internationally). The organisations from the Global North underline their commitment to support those in the Global South, through solidarity with existing struggles and by directly addressing projects led by governments, corporations, banks and financial institutions based in the Global North. •

The indication of the territorially required cuts will be based on methodologies such as the Paris Equity Check that propose equitable national contributions based on historical emissions and capacity.

Three months after the signing of the Glasgow Agreement all member organisations will have produced their first territorial inventory of main emitters and new projects. After that, the process of building the corresponding climate agenda will begin, with information such as priorities for shutdown and transformation. In each territory the members will produce these collectively. The information will be centralised and pubicly accessible on the Glasgow Agreement website, and reported directly to all members.

There will be working groups that will receive communication from all member organisations on any required assistance. Global, regional and territorial assemblies will be used as spaces for strategy and coordination.

We are more than 150 organisations from around the world that have committed to the Glasgow Agreement!