Migrant Women Are Holding Society Together During This Pandemic

The past year has seen several lockdowns as a result of the pandemic, which have had a deep impact on education, employment and the way we work globally. These factors have had an especially stark effect on women.

For more than 168 million children worldwide, schools have been closed for almost a year, forcing them to resort to online learning from home, according to UNICEF. In most households, it is women who have borne the majority of the burden of home schooling during the lockdowns.

Meanwhile, even as working from home has become the “new normal,” the pandemic has resulted in the loss of 24.7 million jobs, according to an estimate by the International Labour Organization (ILO). Economic inequality is likely to worsen, the ILO warns, as the jobs crisis disproportionately affects women and migrants. 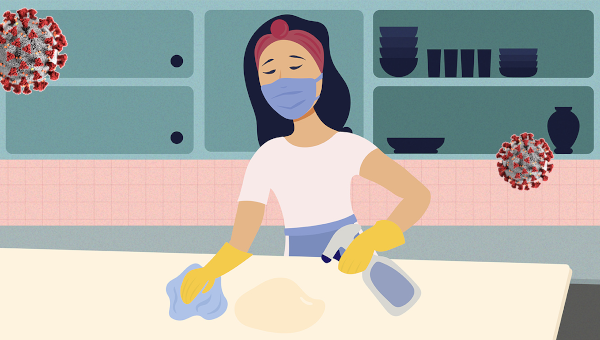 Women Workers and the Pandemic

In Latin America, the frequent lockdowns have come to define life during the pandemic, the social impact of which has unequally been borne by women. This has led to many women having to leave the workforce due to the mounting pressure of looking after their families, especially since the gender pay gap means they might not be the primary earning members of the household.

In cases where women try to retain their jobs while taking on the major burden of the housework as compared to men, sometimes, the only option available – if they can afford it – is to hire a domestic worker to do the various forms of care work like cooking, cleaning, child-rearing and eldercare that cannot be done easily by a working woman. According to data provided by UN Women in 2016, one in six domestic workers is an international migrant; of these workers, 73.4 per cent are women. So, the domestic worker is typically a migrant woman.

Due to the precarious nature of domestic work and the insufficient political power among women domestic workers, their working conditions are appalling. According to data provided by Alliance for Solidarity, 57 per cent of domestic workers have no fixed working hours. That means that these domestic workers do not control how long they work for in a day and when they can leave their workspaces, nor do they control their breaks and their meals.

During the pandemic, the situation for domestic workers has worsened. They are presented with tough choices: either they stay in their employer’s house for the duration of the lockdown and therefore neglect their own families, or they choose to commute and risk losing their jobs because their employers fear that they could bring the virus into their households. Domestic workers’ unions have protested against this terrible choice. But their voices are not presented in the media, largely because these women are marginalized and treated as invisible parts of society.

Women domestic workers are part of a large community of informal workers, many of whom have held society together during this pandemic. It is these informal workers who have been attending to food distribution, cleaning public spaces, and working in small grocery stores and other shops. They bear the high risk of being infected not only due to the nature of their work but also because of their long commutes using public transport. In South America, such jobs are held largely by migrant women, many of whom have insecure residency status.

“We Have No Labour Rights – Only Working Conditions”

Angélica Venega left Peru for Chile to earn more money so she could support her daughter’s education. A relative put her in contact with Sinducap, a trade union for workers in private households and those who work in related activities. Sinducap is part of the Latin American and Caribbean Confederation of Domestic Workers, founded in 1988. Sinducap, Venega told me, allowed her to bargain for clearly defined working conditions in the home where she is employed. These terms of employment include working hours, provision of meals and money for transportation, payment of social security, a uniform requirement or lack thereof, and limits to what is expected during working hours.

Emilia Solís Vivano, president of Sinducap, told me that there are more than 300 people in the union. The union members are not only domestic workers but also include cleaners, caterers, gardeners and window cleaners. These workers help to sustain a better way of life for their employers. Unfortunately, the same is not possible for them.

Already precarious before the pandemic, the situation for the workers has become worse in the past few months. “Because of the stigmatization of domestic workers as possible [carriers] of the virus,” Venega told me, “many employers ask us to live in the house to avoid using public transportation. This is not exactly an offer. If you don’t accept this offer, you are fired. You are dismissed, but because they make you an offer which you refuse, they call it a resignation. If you resign, there are [no] legal benefits. In a pandemic, we have no labour rights. We only have conditions.”

The demand that domestic workers live in their place of employment, Venega said, is not just about the pandemic, fear of disease, and the protocols of health. The pandemic, she said, is being used by employers to extend the working day for less pay. When you live in the same house where you work, working hours can end up being dictated by the convenience and working conditions of the employers, who may demand more attention once they come home from work, during weekends when receiving visitors, and according to the schedule of their children.

If a worker is infected by the COVID-19 virus, then they are summarily fired. Workers are responsible for paying for their treatment and where they spend a quarantine period in these cases. This is even more terrible for a migrant, who might not have a house to go to or a family to shelter with. Being fired could mean deportation.

The “new normal,” Venega told me, is not so “new.” It is part and parcel of how things were even before the pandemic. “What is being made normal,” she said, “is greed.” •