The Farmers’ Fight Is Our fight!

The New Trade Union Initiative supports and stands in solidarity with the on-going farmer’s struggle, including the call for Bharat Bandh by the All India Kisan Sangharsh Coordination Committee and other platforms of farmers’ unions. The lack of willingness to find a fair and just solution to the demands of the farmers by the government is symptomatic of the tone deaf government that we have come to be used to under the BJP. 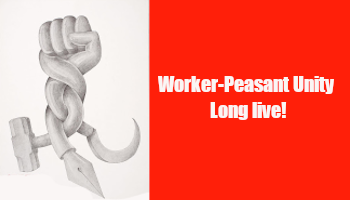 The three farm laws: the Farmer’s Produce Trade and Commerce (Promotion and Facilitation) Act, 2020, The Farmer (Empowerment and Protection), the Agreement of Price Assurance and Farm Services Act, 2020 and the Essential Commodities (Amendment) Act, 2020 were legislated in September, despite the strongest possible opposition both within and outside parliament. These had been unilaterally brought in as ordinances in June amidst the unplanned and unprepared draconian lockdown.

The three central laws read together in effect disband local markets created through state laws, allow corporates to enter the market for agricultural produce and above all remove regulations against hoarding and storage limits that allow restrictive market practices for essential food products especially cereals opening the way for price fixing. Read together the laws would undermine the autonomy of the farming community and reducing them to dependent producers within the structure of corporate farming. Under the banner of the ‘One Nation, one Market’ dominated by large corporations the laws would render the long standing protection of the Minimum Support Price (MSP) redundant, which was critical in regulating agricultural produce and ensuring food security in the country.

The agrarian economy has been in crisis over the six-and-a-half years of BJP rule as the increases to the MSP have been deliberately suppressed, credit to rural areas shrunk along with a year on year reduction in government expenditure. While the existing agricultural produce markets for and the MSP mechanism are not without flaws and require change, turning agriculture over to corporates is not the solution.

Recommendations for reform made by the M. S. Swaminathan chaired National Commission for Farmers have been completely ignored by the BJP while promising ‘doubling farming incomes by 2022’. The new laws will not just affect large farmers they will impoverish small and marginal peasants and render unemployed millions of landless agricultural workers, changing the very structure of the agrarian economy including along its supply chain.

In an economy in which manufacturing, industry and services fail to create jobs, the agrarian economy forms the backbone for the livelihood for nearly half the country’s people. Changing this structure without addressing the jobs crisis will throw the entire economy into disarray more than it already is.

The farm laws and the four Labour Codes legislated, without debate, form the twin poles of the BJP’s efforts to transform both the economy and society by creating an institutional mechanism to transfer incomes and assets from the working class and the peasantry to corporates and the super rich. It is the BJP’s understanding that control by corporates and consumption by the super rich will drive economic growth in the country. While this is gravely erroneous it will cause greater inequality and deepen the divisions in society.

The protesting farmers have been viciously attacked by the BJP government and not allowed to enter the country’s capital but kept out like pariahs on the border. On the way here the protesters were tear gassed and had water cannons turned on them in cold weather. A government that has in the past year sought to penalise and make financial recoveries from peaceful protesters had its police force gorge out sections of the highway so that the tractors and trollys of the protestors could not make their way to Delhi.

The protesters have been variously termed as representatives of the parties of opposition, agents of traders, ‘Khalistan supporters’ and of course anti-nationals. The BJP has given itself the sole right to decide what is good and not good for the country. The farmer’s movement, like the protests that have preceded it since the 2019 general election, marks an important advance in the resistance against an authoritarian government that is determined to subordinate all the country’s working people to corporates. 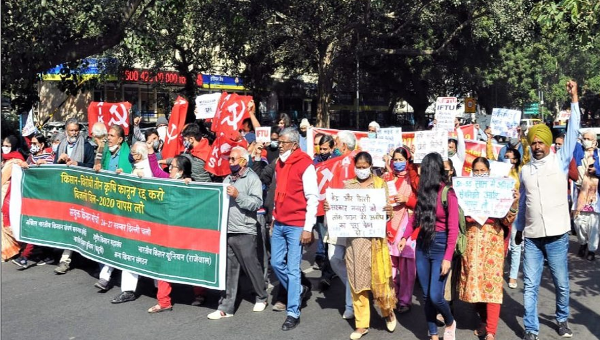 Trade Unions Hail Farmers
For Their Agitation on Just Demands

The Platform of Central Trade Union Organizations and independent Federations/Associations hail the decision of All India Kisan Sangharsh Coordination Committee (United Platform Indian Farmers’ Organizations) and the joint committee of Punjab Kisans to stand firm on their demands and continue their united struggle.

The Farmers who are in stay-in protests in couple of lakhs along with their tractors and trolleys in the four borders of Delhi, have rejected outright the Government’s offer to go to Burari ground as a precondition for talks. They are firm in their demands for scrapping of the three farm-laws and also the Electricity Bill 2020, which are also the demands of the United Platform of Central Trade Union Organizations and independent Federations/Associations, pressed for through 26th November 2020 countrywide General Strike. There is no ‘misunderstanding’ about anti-people and anti-farmer destructive character of the agri-laws passed recently and the Electricity Bill 2020 among the farmers of the country, as sought to be painted in a distorted manner by the PM in his Man Ki Baat and his ministers’ statements. The Farmers are determined to carry on their united struggles.

The CTUs condemn the false propaganda of the Government on oxygen supply to Delhi getting affected due to picketing of the Farmers at the borders. Rather they have magnanimously let through all healthcare traffic.

The AIKSCC has called upon solidarity support to their struggle through supportive agitations throughout the country from the toiling people and their organizations.

The Joint Platform of Central Trade Unions and independent Federations/Associations call on their affiliates throughout the Country to demonstrate in solidarity with the Farmers’ demands till they are honourably met. •

This article first published on the Europe Solidaire website.