In-and-Out of Turkey’s New State in the Making

Turkey has been passing through an accelerated state transformation since the 2013 Gezi uprisings. Having been aggravated by the Justice and Development Party’s (AKP) loss of parliamentary supremacy in the June 2015 general elections, the state has instituted escalating police operations, extra-judicial executions, suppression of the media and political opposition, and violation of fundamental human rights and freedoms have become ordinary political practices of the Turkish state. The failed coup attempt in July 2016 further impaired the situation, with the government using it as an opportunity to put an end to Turkey’s republican parliamentary state structure and to establish a sui generis Presidential System of Government (PSG) in July 2018, centralizing practically all political authority in the hands of President Recep Tayyip Erdoğan. 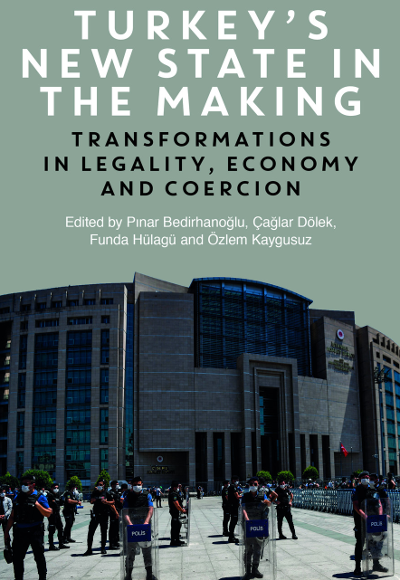 Mainstream approaches that have dominated political analyses so far problematize this transformation as a ‘turn’ toward authoritarianism in the protracted rule of the AKP, while they used to define the same Erdoğan and the AKP as revolutionary actors democratizing Turkey’s Kemalist authoritarian state in the 2000s.1 Without any serious political and/or methodological self-criticism, they have started problematizing this arguable ‘turn’ toward ‘competitive authoritarianism’, ‘illiberal democracy’, or ‘electoral authoritarianism’ as the AKP’s specific response to changes in domestic and international politics, with no recognition of the constitution of Turkish politics by global capitalism.

Even the proliferation of ‘authoritarianism’ worldwide in the late 2010s has not changed a lot in this stand. For, while turning critical toward the AKP authoritarianism, varieties of liberal analyses on Turkish politics have either continued to focus on ‘domestic variables’, or started comparing Turkey with other specific cases. These analyses’ insistent neglect of global processes that cross-cut different ‘authoritarian’ states – except maybe a loose reference to the 2008 global ‘financial’ crisis – is symptomatic of their lack of proper analytical tools to make sense of such phenomena.2

For the majority of the leftist perspectives, the current radical transformations in the Turkish state refer to a new phase in the AKP-style neoliberal authoritarianism, which actually instead should be problematized in consideration of class and political dynamics on both global and domestic scales. The Islamist AKP came to power after Turkey’s 2001 economic crisis, and integrated the so-called post-Washington Consensus agenda to its own political priorities throughout the 2000s. Political and economic problems, and class contradictions, that had accumulated within the AKP-administered neoliberal transformations started producing various bottlenecks at the end of the decade, forcing Erdoğan and the AKP cadres to search for new political strategies to stay in power. Turkey’s New State in the Making: Transformations in Legality, Economy and Coercion (ZED Books, 2020), which I co-edited with Çağlar Dölek, Funda Hülagü, and Özlem Kaygusuz, brings together critical essays that follow these developments to make sense of the transformative implications of the AKP’s neoliberal-cum-Islamist strategies on the political form of Turkey’s capitalist state in the 2010s.

The book is, hence, an attempt to understand the ruptures observed in the AKP-governed state transformations in the 2010s within the political continuity, while the continuity itself is examined within two time-frames. Firstly, the essays collected in the book accept that transformations in the Turkish state’s political form are taking place within a political and class context that has been shaped throughout the forty-year-long global and domestic neoliberalization processes: namely, the liberalization of finance and trade, privatizations, and deregulations including those in the state’s established public functions in social welfare, and the flexibilization of the labour markets. These processes, which have worked to enhance the subordination of both societies and states by capital all over the world, have also substantially redefined state-society relations as well as the state’s conditions of reproduction within Turkey’s financialized capitalism. The fact that this whole process was initially set in Turkey by a military coup d’état in 1980, which had harshly silenced the leftist opposition, is a reminder that coercion and violence have been integral to these processes since the beginning.

Secondly, essays collected in the book make sense of the current state transformations in Turkey within the political continuity of the 18-year-long AKP rule. Indeed, having been concerned to identify its specificities within Turkey’s neoliberal history, the leftist perspectives problematized the AKP-led state transformation in the country as neoliberal authoritarianism3 or authoritarian statism4 ‘with an AKP face’ after the party’s rise to power in 2002, for, the AKP’s neoliberal rule in its first ten years can be differentiated from the preceding governments by its extraordinary success in the systematic imposition and deepening of various neoliberalization processes by consent. The AKP managed to implement the rather challenging neoliberal agrarian ‘reforms’, legislated the pending social security and labour laws, and privatized large-scale profitable state enterprises without any deterioration – or even improvement – in its electoral base from 2002 to 2013. The material basis of this success was provided by the monetary glut in global financial markets, which rewarded the AKP’s neoliberal achievements generously. The inflow of finance reached to $43.36-billion per annum in average in 2002-2013, while this figure was only $4.26-billion in 1990-2001.5

On the other side, the AKP utilized this historical financial opportunity effectively by channelling these monetary flows to domestic capital and labour in the form of credits throughout the 2000s. Under conditions of more than a decade-long favourable global financial atmosphere, indebtedness created a temporary relaxation effect over the population as a whole, enabling the party to form an expansive hegemony in the 2000s through debtfarism and protecting itself from the politically destructive implications of neoliberal transformations.6 Globally-financed debtfarism was also complemented by the AKP municipalities’ strategic provision of charity services. On the discursive terrain, the Islamist AKP managed to put a decisive end to class-based politics7 by de- and re-composing labouring classes through a centre-periphery discourse, which has helped politicize the peripheral poor in symbiotic relationship with the AKP and against the Kemalist state establishment at the centre, populated and supported by the relatively well-off ‘middle classes’.8

Privatization and Personification of State Power

The book proposes that the resilience of the AKP’s political power in Turkey throughout economic, political, and ultimately, the pandemic crises since 2013 needs to be problematized critically within these two historically constitutive time-frames, while ruptures within this continuity give hints of what would follow the AKP’s ‘strong crisis state’.9 As we, the editors, highlight, “[t]he emergent characteristics of Turkey’s new neoliberal state in the making can be identified for the moment as the privatization and personification of state power, the rise of coercion, discretionary economic management, and the crippling of basic modern state institutions through processes such as de-constitutionalization and Islamization.”10 This conclusion is supported by the comprehensive analyses made in the individual chapters of the book, which enhance our understanding of various political processes at work in contemporary Turkey, with due consideration of their social constitution by global and domestic class-cum-political dynamics.

Some would argue that these characteristics are not new at all but have been defining the Turkish state since its establishment in the 1920s. My provocative counter-question to this argument would be to ask, for whichever state the contrary can be claimed. Given the mismatch between the modern form and the bourgeois content of states in capitalism since the 18th century onwards,11 it is possible to observe the intensification or weakening of these features in the practices of many states in the world in different conjunctures – exchange ‘Islamization’ with ‘religiosity’, for instance, or consider Trump’s systematic attempts to personalize political power in the US recently. Hence, the book’s emphasis on the novelty of these characteristics underlines a systematic transformation of the Turkish state along these lines today in a process that is substantially redefining its established modern republican form. One might argue that the capitalist content of Turkey’s state cannot be contained by its modern bourgeois form anymore. The concomitant rise of authoritarianism and/or populism in the world implies that the same might be true for the other states of the South and North as well.

This is indeed why we propose in the book that the reasons and the implications of the ongoing state transformation in Turkey, besides its AKP- and Turkey-specific features, need to be problematized beyond Turkey, or the Middle East (as proposed by the Middle Eastern Studies for instance), or the East (as associated by China and/or Russia). Inviting the readers to think seriously on the arguments of such commentators as Cookman in the West, who liken Trump’s US to Erdoğan’s Turkey,12 different chapters of the book rightly point out how Turkey’s deconstitutionalization has also been defined by the decisions of the European Court of Human Rights in the 2010s; why the arguments on Turkey’s ‘shift of axis’ do not match the country’s continuing political and defense engagements with the West; how the structural contradictions of capital accumulation in Turkey have been managed and postponed by financialization processes as in many other countries; how Turkish police violence has been transformed since the 1990s within the same global security establishments that target black, coloured, or indigenous lives all over the world; why the rise of post-truth politics, anti-intellectualism, and anti-genderism is also a problem in Turkey today; and why we should come together everywhere against this organized malice.

Last but not the least, the book is a call for comprehensive investigations into the question of the state within capitalist transformations. The capitalist state has its own history within the development of capitalism, which should not be written on the basis of the functional needs of global capital accumulation simply but within the historicity of politics of capitalist social relations in global and national contexts. Critical scholars working on Turkey have been questioning how to make sense of specifically ‘state transformations’ within neoliberal capitalism for about two decades now. This is due to their frustration with the Islamist AKP’s political strategies regarding the state from as early as 2002, as well as with the exaggerated optimism of the liberals in Turkey and abroad on the democratizing potential of these strategies. In their concerns to challenge both this interpretation and the AKP-led political transformations in Turkey, critical scholars and activists have utilized the analytical capacities of almost all the available Marxian concepts developed on state so far.

On the basis of this long-term critical engagement with state transformation in neoliberal capitalism, we argue that just as Chile was the first laboratory for the neoliberal class attack on labour, “Turkey under AKP rule can be conceived as the first laboratory for the making of the new political form of neoliberal capitalism, although this historical process, like that of neoliberal social transformations, will be a contingent and long one that will be continually redefined by class and political struggles, adventurous political moves, and costly political and economic crises.”13 What this conclusion implies for the rest of the world is that the current proliferation of authoritarianism and/or populism should not be understood as the outcome of various neoliberal governments’ responses to capitalist crises only. It should be comprehended instead as capital’s world-historical search for a new state form after weakening labour politically for more than forty years. Reading the Turkish state transformation with this insight would provide an important understanding of the policies and strategies designed to this end, as well as on how to combat them. •

Dr. Pinar Bedirhanoğlu is an associate professor in the Department of International Relations at Middle East Technical University in Ankara, Turkey.