What Would the NHS Look Like If It Took Health Promotion Seriously?

On Sunday, July 5, 2020, the British Prime Minister, Boris Johnson, wished it a happy 72nd birthday. Spitfires flew over in celebration, and buildings were lit up in blue as people poured out into the streets at 5 p.m. to clap in appreciation of Britain’s favorite institution. We’re talking, of course, about the National Health Service (NHS). 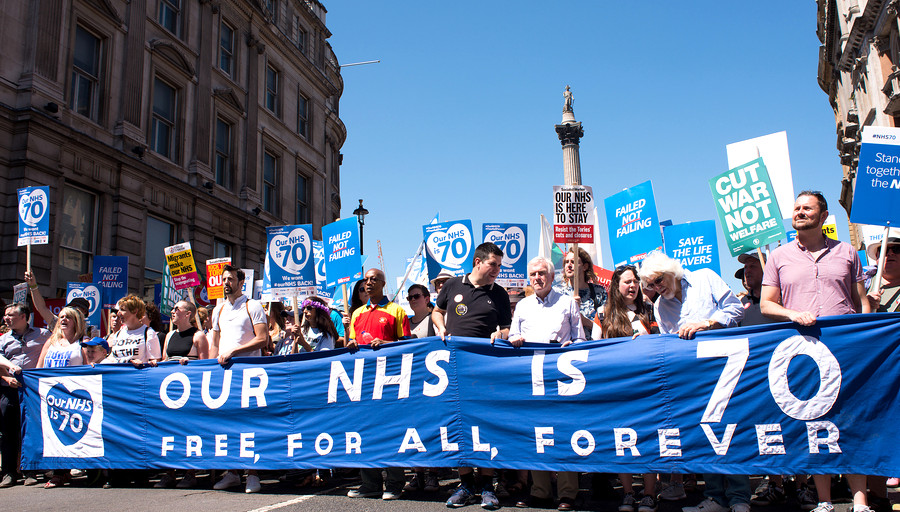 The NHS, it seems, is loved by everybody. During the COVID-19 pandemic, the public have consistently shown their appreciation for the NHS staff with public displays of “thank you NHS” art and coordinated nation-wide rounds of applause. More generally and consistently, the NHS is also celebrated by the Left.

The reasons for this are both historical and ideological. The NHS was founded in 1948 by the Labour Party and was based on the following three principles; (1) to meet the needs of everyone, (2) to be free at the point of delivery, (3) and to be based on clinical need, not ability to pay. This, of course, was part of the broader program of establishing a welfare state.

Since the 1980s, however, the NHS – and the welfare state in general – has been under attack. A new generation of right-wing politicians – of which the hypocrite Boris Johnson is the successor – managed to galvanize sufficient support for the privatization of large parts of the welfare state, including aspects of the NHS. This reactionary politics was started by Margaret Thatcher (as leader of the Conservative Party) and continued by Tony Blair (as leader of New Labour), making it establishment orthodoxy by the end of the century. Since then, the Left has been on its back foot, struggling to defend the progressive institutions introduced following the devastation of World War II.

This, of course, makes sense. Defending actually existing progressive policies and institutions is always a good use of resources. However, in and of itself, it is probably not enough. We cannot simply call for the renationalization of the privatized sections of the economy. In addition to these defensive measures, the Left needs vision. We need to be able to say what a good health system for the 21st-century would look like. This, however, means looking at the beloved NHS critically.

While it is true that the establishment of the NHS represented a great leap forward and that – even in its partly privatized form – the NHS constitutes a much better health system than those in operation in many other countries – including some that are much richer than the UK – it is also true that the NHS could be much better. After all, there is always room for improvement. So, what – beyond the renationalization of the privatized sections of the NHS – should the progressive-left be calling for?

This question raises another, more basic question – namely, how to proceed? One answer – perhaps the best one – is to draw on the latest research into health promotion. Leading public health scholars have referred to such an approach as “evidence-based politics” (Richard Wilkinson and Kate Pickett) and “ideology with evidence” (Michael Marmot). In his 2010 review, Marmot highlights the seriousness of health as a social justice issue:

“Reducing health inequalities is a matter of fairness and social justice. In England, the many people who are currently dying prematurely each year as a result of health inequalities would otherwise have enjoyed, in total, between 1.3 and 2.5 million extra years of life.”

The review then goes on to point out that there is “a social gradient in health – the lower a person’s social position, the worse his or her health” and that “[h]ealth inequalities result from social inequalities.” Furthermore, “[t]his link between social conditions and health is not a footnote to the ‘real’ concerns with health – healthcare and unhealthy behaviours – it should become the main focus.” This, of course, applies as much to the NHS as it does to any other social institution. The difference, however, is that the NHS has a commitment to health promotion and to evidence-based practice. So, what are the implications of these findings for the NHS? Could the answers to this question help inform a progressive-left program for NHS reforms?

If the NHS is once again to become a genuine symbol of progressive-left politics then we need to identify the sources of social inequality inside the NHS. Anyone who has engaged with the NHS – either as a patient or a member of staff – cannot help but notice how hierarchical it is. The most obvious illustration of this is the differences in the color of the nurses’ uniforms – typically the darker the blue, the higher up the nurse is in the hierarchy. Nurses in light blue uniforms – who often have the most patient contact – are not formally recognized as professionals.

However, it is a set of institutional structures that gives backbone to this hierarchical color coding. The first, and perhaps most obvious, is the division of labour. This refers to how tasks are shared out within the workplace. In the NHS there is a corporate division of labour. This means that empowering and disempowering tasks are shared out unevenly. Some jobs – at the top of the hierarchy – are made up of tasks that are almost, if not entirely, empowering. Empowering jobs are those that give access to information and authority, making it possible to implement decisions that impact large parts of the workplace, including, of course, the staff. These jobs are taken by a minority of staff who use their power to influence how the NHS is organized and run. All other employees endure, to varying degrees, relatively disempowering jobs.

The corporate division of labour is one way in which social inequalities are institutionalized within the NHS. This, however, means little unless it is supported by a pay scheme that complements the hierarchy. Not surprisingly, in the NHS the higher up in the hierarchy you are, the more you get paid. Put simply, differences in pay reflect differences in power, and one source of economic power within the workplace is for a minority to monopolize empowering tasks. So, in addition to the corporate division of labour, we also have complementary criteria for remuneration that institutionalizes social inequalities within the NHS.

Another important factor – which runs parallel with the corporate division of labour – has to do with decision-making. Anyone who has worked in the NHS – in any capacity – will tell you that you are expected to follow orders from above. As with virtually all other workplaces, all democratic rights to participate in the management of our own place of work go unrecognized. Authoritarian decision-making is another way in which social inequalities are maintained within the NHS.

Public ownership of the NHS remains an important part of any campaign to protect the public services from privatization. However, if the NHS is to become a beacon of the progressive-left in the 21st-century, in addition to this, we also need to push for reforms that address institutionalized forms of social inequality inside the NHS. The corporate division of labour, the pay scheme that complements that division and the authoritarian decision-making that is accommodated by it all need to be replaced.

This means redesigning jobs within the NHS so that empowering and disempowering tasks are more evenly distributed among the staff. Bringing pay in line with these redesigned jobs will also need to happen. In the absence of an elite of authoritarian managers, new egalitarian and participatory forms of decision-making and self-management will have to be institutionalized. Each of these measures would directly address social inequalities (that the NHS currently institutionalizes), and with it, the social gradients in health that we know emerge from these social inequalities. Given that the NHS is one of the world’s largest employers, the health implications of this would be very significant.

Clearly, this has implications for education and training. However, given that inequalities in education constitute a major social determinant of health, nobody with a serious commitment to health promotion and social justice should see this as an obstacle to trying. The introduction of these kinds of radical reforms to the NHS would also have implications for the broader economy. It would help expose the pathological myth on which the current system rests. As the Marmot Review puts it:

“Economic growth is not the most important measure of our country’s success. The fair distribution of health, well-being and sustainability are important social goals.”

This article was produced by the Independent Media Institute.

Collective 20 is a group of anti-capitalist, feminist, anti-racist, environmental activists and writers from around the world who provide analysis, vision, and strategy for positive social change.