The case can easily be made that Alberta’s United Conservative Party (UCP) is Canada’s most dangerous political formation. Led by former Harper-era cabinet minister and far-right evangelical Christian Jason Kenney, the UCP government is currently taking a sledgehammer to Alberta’s provincial state, gutting the province’s fiscal and regulatory capacities, attacking its public servants, privatizing its healthcare system, undoing basic labour protections, suppressing dissent, and eliminating any and every barrier to the fossil fuel industry’s profits – the climate crisis notwithstanding. 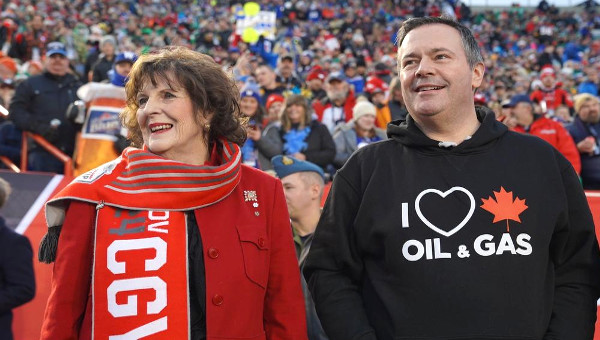 For many on the left, it seems a reasonable assumption that the UCP is the creature of the fossil fuel giants that dominate the province’s economy. The party does little to conceal its love affair with all things oil and gas, nor its animosity toward the industry’s critics. But the party’s financial disclosures tell a different story. In fact, if party financing is any indicator, the largest fossil fuel corporations are far from the UCP’s main constituency. Instead, the UCP is very much the party of the homegrown Alberta business class.

The UCP and the Oil and Gas Giants

According to Elections Alberta’s financial disclosures website, the UCP raised $5,331,098.84 in campaign contributions in 2018. In the same year, 142 different individuals contributed the maximum $4,000 donation to the party, accounting for just over 10 per cent of its total campaign financing.

The list of contributors to the UCP is striking for some of its absences. The Corporate Mapping Project has identified 21 “Emitters” among the “Fossil-Power Top 50,” which is the most politically influential organization in Western Canada’s fossil fuel sector. Emitters are those “corporations based in Western Canada that are directly involved in extracting, processing and transporting oil, gas and coal.”

The officers and board members of thirteen of these 21 corporations made no contribution to the UCP. Among the eight companies with officers or board members that did donate to the party, only four made the maximum donation of $4,000.

The table below lists donations from individuals tied to the 21 Emitters.

As can be seen from the table, several major players in Alberta’s oil patch did not contribute to the party: Canadian Natural Resources Limited, Enbridge, Imperial Oil, Kinder Morgan Canada, LNG Canada, Shell Canada, Suncor, and Teck Resources among them.

Also striking is the background of the biggest contributors from among the 21 Emitters. ATCO Group, Cenovus, Crescent Point, and Encana are decidedly homegrown Western Canadian operations, unlike Shell and Imperial Oil, for instance, which are multinational in scope and foreign in origin and control.

Who Bankrolls the UCP?

If the fossil fuel giants play such a minor role in financing the party, who does pay the UCP’s bills? While it’s hard to find detailed information about each and every one of the 142 big donors, Google searches can tell us a lot. Prominent among the party’s backers are officials from smaller-tier oil and gas companies, oil exploration companies, pipeline construction companies, “energy services” companies, construction companies, real estate developers, cattle ranching ventures, and a smattering of used-car dealerships.

With the exception of Brad Shaw, the CEO of the multi-billion-dollar telecoms company Shaw Communications (whose son and daughter also gave maximum donations), the bulk of the UCP’s big donors represent companies that, presumably, most Canadians have never heard of. Many are privately held and operate on a local scale. Many have revenues in the millions rather than the dozens of billions that we’re used to seeing among the multinationals that control the global economy. Their profit margins are smaller, their economic security hanging in the balance.

A few profiles of these donors help to better understand the UCP’s toxic political style. A useful starting point is Peter Kiss, President and CEO of Morgan Construction and Environmental, Ltd., an oilfield construction business. Privately owned, Morgan does not “publicize what we do or how we do it,” as Kiss put it to the Alaska Highway News. The company’s website lists several of its current projects: reclamation and remediation in the tar sands, mass demolition in Fort McMurray, and a municipal landfill in Calgary.

BC Hydro awarded Morgan a contract to build an access road to the utility’s contested Site C hydroelectric dam on the Peace River near Fort St. John. In 2016, Kiss took to Twitter, vowing not to hire University of British Columbia graduates after the student body and faculty association voted to pressure the university’s board of governors to divest its fossil fuel holdings. Kiss, whose Twitter profile reads “Proud of my carbon footprint that employs so many,” signed off his pledge with, “If you are an employer in Alberta I encourage you to change your hiring practices. Eat Cows, Drill Oil, Be Albertan.”

More recently, Kiss has been appointed to the Alberta government’s 12-member Economic Recovery Council, struck to steer Alberta’s recovery from the COVID-19 pandemic and the collapse in oil prices. Chaired by Imperial Oil board member Jack Mintz, the council also includes among its members former prime minister Stephen Harper and Nancy Southern, the chair and CEO of ATCO Group and daughter of UCP donor Margaret Southern.

Whitecap Resources CEO Grant Fagerheim is another big UCP donor who is no stranger to controversy. Whitecap is an oil and gas producer with operations in Alberta, Saskatchewan, and BC. It produces about 75,000 barrels of energy per day, and in 2018, it had a net income of $65-million. Whitecap’s share values peaked at about $18 a share in 2014 but have since plummeted to around $2.

Fagerheim has a tendency to mix business and politics. As PressProgress reported during the 2019 federal election, Fagerheim urged all employees at Whitecap’s Calgary office to share a chain letter with their families warning that only a Conservative Party election victory could prevent the danger of Alberta separating from the Canadian federation. As the PressProgress story reads:

“The 1,276-word chain letter begins on a dramatic note, declaring to readers that ‘the fate of Canada and our incredible province of Alberta rests in your hands.’ It blames Alberta’s economic struggles on a ‘legislated recession’ that is sabotaging the provincial economy and claims ‘50% of Albertans’ are prepared to separate from Canada – a figure disputed by pollsters. ‘We’ve been beaten into submission,’ the chain letter states.”

While it’s hard to say what role Fagerheim played, at least three other Whitecap executives and board members donated the maximum $4,000 to the UCP in 2018: VP Business Development and IT David Mombourquette, VP Engineering Darin Dunlop, and director Gregory Fletcher.

Raymond Knelsen, owner of “one of the largest, privately owned companies in Alberta,” Knelsen Sand & Gravel Ltd., is another big donor. More than half the company’s revenues come from government contracts: municipal roads, subdivisions, street improvements and highways. But Knelsen credits his company’s success to “hard work, a don’t give up attitude and maintaining [his] vision.” His goals are both ambitious and strange, but fitting in light of the UCP’s policies: “We want to pave all of Alberta.”

Other UCP donors chalk up their success to a similar can-do attitude. Craig Corser’s Yellowhead Wood Products’ website claims – in a very large font – that “There is no substitute for hard work.”

Is Big Oil’s absence from the UCP all that surprising? Perhaps not. Long ago, the pioneering sociologist C. Wright Mills made the distinction between “sophisticated” and “practical” conservatives in the US “power elite,” a distinction that resonates in present-day Alberta. Practical conservatives, Mills wrote, represented “the outlook, if not always the intelligent interests, of the more narrow economic concerns.” Sophisticated conservatives, on the other hand, were

“‘sophisticated’ because they are more flexible in adjusting to such political facts of life as the New Deal and big labour, because they have taken over and used the dominant liberal rhetoric for their own purposes, and because they have, in general, attempted to get on top of, or even slightly ahead of, the trend of these developments, rather than to fight it as practical conservatives are wont to do.”

The parallels between Mills’ mid-century America and twenty-first century Alberta are plain to see. Clearly, the big tar sands producers have very much tried to “get on top of” the “political facts of life,” none more pressing than the growing public concerns about the ecological and climate impacts of rapid fossil fuel development.

This explains Big Oil’s accommodation not only to Alberta’s short-lived NDP government, but also to the Trudeau government’s modest carbon tax, introduced in a “grand bargain” that traded a price on carbon for a federal commitment to expanded pipeline capacity, not to mention other efforts to earn its “social license” to operate. Small oil and the Alberta business class have rejected this approach, opting instead to tap into the global rise of rightwing populism.

Behind these divergent politics lies economics. The 2014-15 oil price collapse has taken a heavy toll on Alberta’s smaller producers, while the bigger players, based mostly in the tar sands, have been able to withstand the lean years. While Kenney and other right-wing forces have blamed government red-tape – think the carbon tax, Bill C-69, the ban on oil tankers off BC’s northern coast – for the industry’s financial woes, the simple reality is that for Alberta’s smaller producers international oil prices are far too low to turn a profit.

Moreover, unlike the multinationals, the small producers can’t ditch their Canadian operations in favour of lower-cost projects elsewhere. The oil price collapse represents a potentially lethal threat to their relatively newfound wealth, status, and power. In light of the fossil fuel industry’s deeply uncertain future, the UCP and its toxic politics might be Alberta’s business class’s desperate bid to stave off the inevitable. •