Not since the mass protests that originated in Ferguson, Missouri, in 2014 when a white police officer killed a black man named Michael Brown, has the United States witnessed the current magnitude of the movement against police brutality. The brutal videotaped killing of George Floyd in Minneapolis on May 25, 2020, has pushed Americans to the limit of what they will tolerate from police. Huge multiracial protests have broken out in hundreds of cities demanding an end to racist policing. While many of the problems can be laid at the feet of President Donald Trump, whose administration obliterated the modest Obama-era police reforms and who has delighted in openly encouraging police to be violent, the current status quo of accepting and encouraging racist and murderous policing has been a largely bipartisan project at the federal, state, and local level. 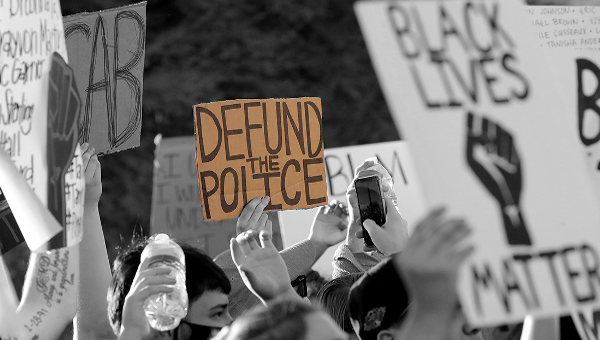 Protests against police brutality have a long history that predates the rallying cry of “Black Lives Matter” becoming a household phrase. Well before Trump was on the national scene, Democrats and Republican leaders have had many years to right the wrongs that black activists and community leaders were decrying. After Rodney King’s 1991 brutal beating was caught on tape in Los Angeles and the acquittal of his abusers sparked a historic and violent uprising, there were years of reforms aimed at the Los Angeles Police Department (LAPD) that resulted in only the mildest changes. The liberal city, dominated by Democrats, continues to have the largest number of police killings nationwide and to date, the city’s first black female district attorney, Jackie Lacey, has refused to prosecute a single officer during her tenure.

When Eric Garner was choked to death in 2014 by police in Staten Island, New York City, his horrific killing, captured on video, and his last words, “I can’t breathe,” sparked mass protests and deep discourse about reforming police protocols. But just as in Los Angeles, the core demand that activists have been making at least since the police murder of Amadou Diallo in 1999 – that those who violate rights should be held legally accountable – has gone unmet. Daniel Pantaleo, the New York Police Department (NYPD) officer who put Garner in a chokehold, remained on the force for five years and was ultimately fired but never charged. Like the LAPD, the NYPD has enjoyed the protection of a largely liberal and Democratic political landscape.

During the presidency of Barack Obama, some modest reforms were enacted at the federal level, largely through executive orders as Congress remained unable to break through political gridlock. Obama’s federal oversight of police departments through court-ordered consent decrees was a start, but in his last act as Trump’s attorney general, Jeff Sessions signed a memorandum that undid the Obama-era consent decrees before stepping down. Trump also resumed the flow of military equipment and weapons to local police departments.

Now, as mass protests are taking place all over the nation, the images of well-armed and flak-jacketed police facing off against protesters and violently subduing them while remaining encased in protective gear stands in stark contrast to our desperately under-equipped healthcare workers who have been vainly trying to save as many lives as possible during the coronavirus pandemic. Police are clad head to toe in high-tech gear, face shields, and body armor, with no shortage of plastic handcuffs, rubber bullets, and tear gas canisters. The optics of these modern-day gestapo-like forces roaming city streets, bashing in heads and firing tear gas into the faces of unarmed protesters, are a reminder of just how many federal and state-level resources we have poured into law enforcement over the years at the expense of healthcare, education, and other public needs.

Similarly in New York City, the Democratic Mayor Bill de Blasio’s proposal to compensate for pandemic-related revenue losses is to make cuts to the school budget that are 27 times that of his city’s police budget cuts. Alice Speri writing in the Intercept explains that, “The US spends some $100-billion annually on policing,” and “[i]n cities across the country, policing alone can take up anything between a third and 60 percent of the entire annual budget.” And while the pandemic is forcing cities to make hard choices about which public services to slash, police department budgets have remained immune to cuts. Liberal cities like LA, New York, and Minneapolis, in the words of one journalist, “keep piling money on police departments.”

Just as congressional Democrats for far too long have poured money into the US military to fuel wars abroad – even outdoing Trump’s thirst for military largesse – the Democratic Party’s state and local leaders have poured money into our domestic armed forces – the police – to fuel a war on us, and especially those among us with black or brown skin.

Demand to Defund the Police

Now, because the collective public rage over police violence and impunity has reached a fever pitch, something extraordinary is happening. A long-standing activist call to defund the police is receiving a mainstream platform. On May 30, the New York Times published an op-ed by two advocates of Black Lives Matter entitled “No More Money for the Police.” Black Lives Matter has explicitly called for, “a national defunding of police,” and is demanding, “investment in our communities and the resources to ensure Black people not only survive, but thrive.”

Author Alex Vitale’s 2018 book, The End of Policing, aptly articulated on its cover that “[t]he problem is not police training, police diversity, or police methods. The problem is the dramatic and unprecedented expansion and intensity of policing in the last forty years, a fundamental shift in the role of police in society. The problem is policing itself.” Vitale’s work has taken on new urgency during the protests over George Floyd’s killing. In a recent piece he wrote for the Guardian, he explained that the solution for local authorities to tackle police “is to dramatically shrink their function.” Vitale added, “We must demand that local politicians develop non-police solutions to the problems poor people face.”

That means mayors and governors from all parts of the political spectrum need to stop subscribing to the notion that police can solve problems caused by poor education, inadequate healthcare, and lack of employment, and start diverting money directly from police into those three areas. Liberal leaders, in particular, who have paid mere lip service for years to social justice, need to put their money where their mouth is and wrest it out of the hands of police departments. •