Stand by the Protesters in Iran!

The following is a statement by the Iranian leftist diaspora in the United Kingdom, France and Germany who have formed a loose coalition of academics and militants to express their support for the ongoing popular uprising in Iran.

“We are protesting against problems in the whole system in general. We reached a crisis where we noticed that the system cannot handle it anymore.”

— a protester in Chile.

Our world is on fire. Not only forests but also cities are burning all over the world. Social conflicts of all sorts are erupting, spreading their flames across the planet: Algeria, Chile, Ecuador, Haiti, Hong Kong, Iraq, Lebanon, Sudan, you name it. Located within this global context of struggles against the social hell of neoliberal, financialized capitalism, there has been another mass uprising in Iran since November 15, 2019. 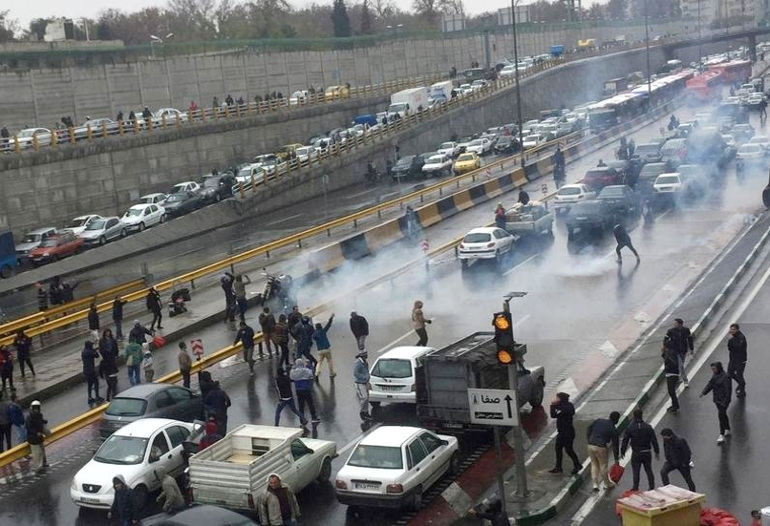 Sparked by the sudden tripling of fuel prices, tens of thousands of Iranian people have been protesting in more than 100 cities throughout the country. Of course, the fuel price per se did not generate such a huge and widespread uprising. Rather, it is 40 years rule of the privileged oligarchy on the basis of authoritarianism, systematic exclusion of opponents, dispossession and expropriation which have made millions of people unemployed, extremely precarious, depriving them from the basic conditions of life (education, healthcare, food, and housing).

Just as 30 pesos increase in subway fares turned the already raging fire into an inferno in Chile, so too, the fuel price sparked the recent uprising in Iran (the same goes for WhatsApp tax in Lebanon, the cancellation of fuel subsidies in Ecuador, and so on). “It is not about 30 pesos,” a Chilean poster proclaimed, “but 30 years of neoliberalism.”

Since Friday, the people in Iran have been courageously fighting against the heavily armed personnel of the regime’s Islamic Revolutionary Guards Corps (IRGC), as well as armed plainclothes militia thugs (known as Basij) who are economically dependent on the regime. The people had every “right” in this world to defend themselves against the systematic state-violence, build barricades on the streets, block highways and occupy local areas and roundabouts.

The forgotten and the invisible in Iran made themselves visible by starting fires. The fire to these people is the yellow vest to the French surplus population and proletarians. Both give voice to the voiceless. While the BBC Persian TV and reactionary loyalist media (Iran International, Manoto etc.) prescribe the liberal doctrine of “peaceful, civil protest,” the Iranian youth are self-conscious of the fact that “a people without hate cannot triumph,” that “material force must be overthrown by material force,” and that they have the right to legitimately defend themselves against the state violence systematically aimed at killing the citizens.

“Enough is enough” is the message of the people in the Global South and beyond. As students have chanted in one of Tehran’s universities, “the people are fed up, enough with slavery.” Like our sisters and brothers in Iraq and Lebanon, the Iranian people are absolutely fed up with the authoritarian capitalism reducing their lives to a mere vegetable existence, the systematic corruption intrinsic to mafia capitalism, and the sub-imperialism of the Islamic Republic in Iraq, Lebanon, Palestine, Syria, Yemen and the region as a whole.

They are not only opposing the tripling of the fuel price but the Islamic Republic in its entirety. No other slogan, chanted by our comrades in Lebanon, can better express the spirit of struggles in the current conjuncture: “All means all” (كلن يعني كلن).

The ruling class has responded to this radical, practical negation of all existing powers with an iron fist. The systematic violence employed by the Islamic Republic to paralyze the uprising is unprecedented in scale and intensity. The authorities have completely shut down the internet for four successive days, transforming the country into a big black box, slaughtering the people with impunity. According to Amnesty International, hundreds have been injured, thousands arrested, and “at least 106 protesters in 21 cities have been killed,” although “the real death toll may be much higher, with some reports suggesting as many as 200.”

There are many videos showing the police shooting demonstrators in the head and chest – as we observed before in the case of Iraq. This happened mainly in the Kurdish and Arab provinces whose discriminated people are once again at the very forefront of the uprising and have paid the highest price.

The Islamic Republic has been successful so far in achieving its goals. They have seized the opportunity provided by the US sanctions to realize their neoliberal dreams in order to be able to both recover the current budget deficit and increase their military operations in the region. To do so, they have shut down the internet by virtue of which they have brutally slaughtered their opponents. Internationally speaking, there has been no specific media coverage, no international condemnation of the state repression, and very little solidarity from the global left – in other words, the bloodbath is carried out in silence. This is possible because, while the oppressed classes in Iran and the Middle East have no illusion about the “anti-imperialist” role of the Islamic Republic, many on the left still believe in the ideological self-representation of the regime as an anti-imperialist force standing against the US and its regional allies.

The left needs to learn from the oppressed classes to simultaneously oppose US imperialism (especially US sanctions) and the Islamic Republic’s interventions in the region.

We, the undersigned academics and militants, urge the global left to break its silence and express its solidarity with the people of Iran and their resistance.

It is pointless for us to demand anything from the Islamic Republic, but we will demand from our comrades and progressive forces all over the world to be – in any possible form – the voice of the oppressed people in Iran suffocated by the forced isolation. We also call on the international left to condemn the atrocities of the regime against its own people.

Finally, we stand in solidarity with the Iranian protesters who are reclaiming their dignity by refusing austerity, authoritarianism, militarization of society, as well as any other form of domination that stifles their autonomy and freedom. •

For a full list of the signatories to this statement, click here. To add your name to the list of signatories, please send an email to azadi_subversion@riseup.net, stating your full name and affiliation / self-description.

For more information, see “The November Protests in Iran.”