With a crowd of 500,000, Montreal’s march for the climate was the largest in the world during the September 20-27 week of climate action. Yet it was also noteworthy for another reason. Despite provincial labour laws preventing unions from striking over political issues, 11 locals representing 7,500 workers formally voted to go on strike for a day. 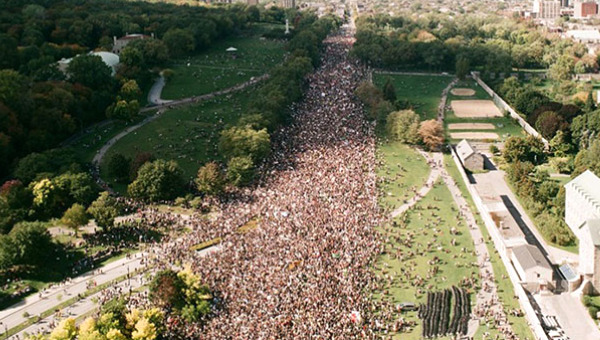 Organizing for the strike began in January with a handful of rank-and-file teachers who were also involved in grassroots ecological movements. François Geoffroy and Frédéric Legault had little experience with unions, but when they saw that the international network Earth Strike was calling for a climate strike on September 27, they decided to dedicate all their energy to organizing a real climate strike. They linked up with the rank-and-file union network Lutte Commune (Common Struggle) to make connections with union activists on how to push forward.

The strategy they came up with was to get local membership meetings to pass a strike mandate. This mandate would be “conditional”: it would take effect only if a critical mass – at least 10 locals representing 5,000 workers – were participating. That way the locals would not strike alone and be vulnerable to repression and marginalization. It also ensured that locals could coordinate without having to use the formal structures of labour federations for communication and strategizing.

Coordination outside the formal structures was important because the unions that the organizers thought might strike belonged to various federations. They didn’t expect a majority of unions to go on strike in any single federation, and they expected the federations to be reluctant, if not hostile to the project.

By June 2019 the first three locals had voted to strike, all of them representing teachers at Quebec’s system of public two-year post-secondary, pre-university colleges, known as CEGEPs. Word was spreading fast among teachers that a climate strike was coming up, and many locals scheduled strike votes for after the summer break.

By design, these strike votes put CEGEP administrators in an awkward position. Administrators did not want to appear to be “against the environment,” and therefore were not eager to repress the strike movement. Under pressure, the administrations of many of the colleges decided to cancel classes for September 27. Instead, they announced an “institutional day” where questions of climate change would be discussed.

Many local union officials therefore called off the strike votes they had scheduled for the start of the school year. Since classes were already canceled, they reasoned, the objective of allowing their members to participate in the rally was fulfilled.

A Strike, Not a Class Cancellation

But the half-dozen rank-and-file leaders who were spearheading the movement replied with a small leaflet titled “eight reasons to vote the strike anyway.” For one, not every CEGEP had suspended classes. Second, canceling classes did not necessarily imply that teachers would be free to participate in the rally.

Most important, teachers had begun the mobilization. It was their movement, not a movement organized by administrators. They were not going to march for the planet because their boss “let them” do so, but because they had decided not to work.

The small group made calls, contacted fellow teachers in other institutions, posted the leaflet on a Facebook group for CEGEP teachers, and debated the proposition in every forum they had.

This convinced eight other locals to join the movement. Most of them represented other CEGEP workers, but some representing office workers and university teaching and research assistants also voted to strike. In total, the 11 locals were members of three different labour federations.

Around September 20, the goal of 10 locals representing 5,000 workers was reached. Quickly, the rank-and-file organizers called a meeting to gather the locals. The idea was to exchange information: how are administrators reacting? Are there threats against strikers? What is the legal status of the strike if classes are canceled? Does anyone need help with their picket lines?

After a good discussion, it became clear that people were not afraid of fines for holding an “illegal strike.” The legitimacy of the cause and the scale of the mobilization had cornered the bosses. Because administrators had agreed to cancel classes in many places, it was not clear how they could “prove” legally that teachers were not providing the normal workload required of them. So in a way, the workers got their strike vote “recognized.” They were on political strike despite the labour laws.

On September 27, a large part of the province was shut down. Students in universities, colleges, and high schools had voted to strike. A hundred fifty businesses shut down and let their employees join the march. Thousands of workers took the day off. And amidst this turmoil, one group was striking in the proper sense. Seventy-five hundred workers were proud to be on climate strike. • 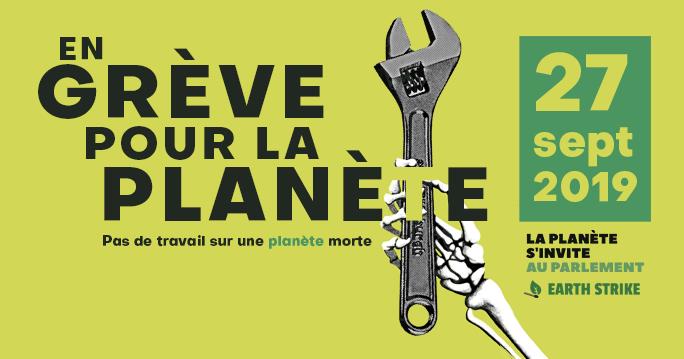 Alain Savard is a PhD candidate in political science and union militant.