Toward A Global Agenda for Action

Energy and emissions trends provide a crucial backdrop for making use of the information on health impacts presented in this report. In the longer term, unless we collectively act to shift what is happening with energy production, distribution and use, then making meaningful inroads to tackling the health impacts of climate change will become increasingly difficult and costly. While the IPCC’s SR15 states that limiting overall warming to 1.5°C is still possible from a technical standpoint, doing so requires “rapid, far-reaching and unprecedented changes in all aspects of society,” involving essentially all aspects of modern society: land, energy, industry, buildings, transport and cities. 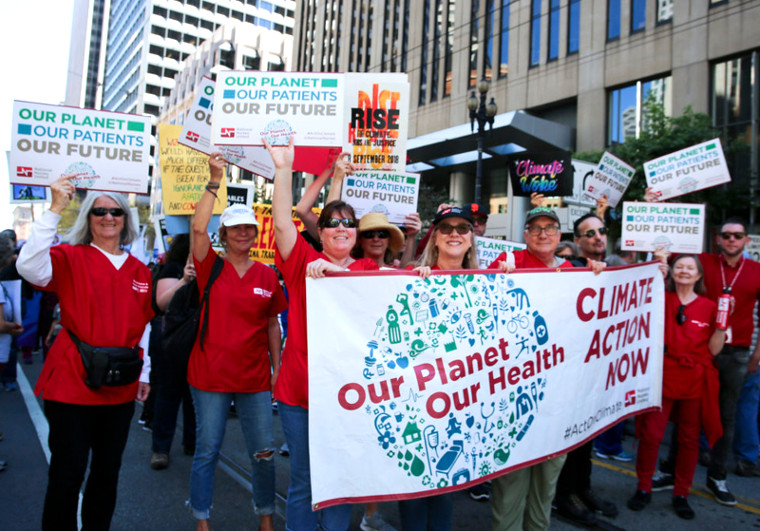 The necessity and urgency of making such profound systemic changes has implications for how nurses can make the best use of health-related information. In the context of that challenge, and complemented by the information on energy and emissions, nurses and their allies may find the health-specific information especially useful in educating their members about the kinds of dangers that are on the horizon if we are not able to unite and rally the social forces that can bring about the “rapid, far-reaching and unprecedented changes” necessary for a change of course.

Any honest assessment of the current energy and emissions trends can only lead to one conclusion: the world is going to get warmer in the coming decades, and without decisive intervention “from below,” this warming will alter the planet’s climate system even further, producing yet more warming, and even greater threats to human health. With aggressive action to reduce fossil fuel use, the levels of warming could be kept within relatively “safe” limits. But there is as yet no evidence that the currently dominant approach to climate policy from elite institutions and political leaders will deliver such action.

As a starting point, there is a clear need for the global health community – including its key voices – to recognize that the transition to a low-carbon future is not “well under way,” nor in any sense “inevitable.” Nurses’ unions have a key role to play in communicating this reality. The health of billions depends on it.

Nurses in the Struggle Against the Climate and Health Emergency

Nurses’ unions are already playing an important role in the fight for climate justice. Nurses have been at the forefront of struggles against the expansion of fossil fuel infrastructure, and thousands of nurses have provided relief for the victims of extreme weather events in various parts of the world. There are many ways in which nurses can continue and step up these struggles. The following list is not exhaustive, but aims to identify six key areas where nurses and their unions can make use of their expertise and political strength in the fight against the climate and health emergency, and for climate and health justice.

Nurses will continue to support and participate in campaigns to stop the expansion of fossil fuel use.

Despite the officially recognized need to move rapidly away from fossil fuels, new fossil fuel infrastructure projects are either under construction or at the planning stage in many countries around the world. New drilling operations, pipelines, export terminals, and coal- and gas-fired power stations risk creating “carbon lock in” for decades to come, effectively destroying any chance of limiting the danger of global warming and climate change. Reaching “net zero emissions” will require a dramatic phase-down of fossil fuel use. Any new projects will make that task far more difficult.

Nurses will demand that vital services are fully staffed and capable of responding to climate instability.

Even if the world stopped burning fossil fuels immediately, global warming will continue for many years to come. This means that extreme weather events are likely to increase in both frequency and severity, and medical services risk becoming besieged by unanticipated outbreaks of diseases like dengue, zika, etc. The experience of Puerto Rico in the aftermath of tropical storm Maria tragically demonstrated the need for emergency services to be able to provide medical care to those suffering chronic health problems. Nurses can play a vital role in strengthening the ability of emergency and health systems to prepare for this challenge.

3. Work with Allies at the Global Level on Preparedness

Nurses can use their voice in helping to ensure that countries and regions plan for the future in ways that can best protect vulnerable populations.

Until mid-century, climate change is expected to primarily exacerbate existing health challenges. This means that investing in health and social safety nets must be a top priority. This includes the need to provide access to safe water and improved sanitation, and enhancing access to essential services such as vaccination. In many vulnerable regions, agriculture-related adaptation will be particularly important. By coordinating at the global level and sharing ideas, experience and expertise, nurses and their unions can ensure essential services are effective and appropriate.

Nurses will continue to draw attention to the roles that poverty, racism, and the lack of workers’ rights play in exposing oppressed people to the worst impacts of climate change.

Whether in factories or fields, on construction sites or roadsides, rising temperatures pose a threat to economically vulnerable workers and the poor. These workers are often members of racial minorities or ethnic groups that find themselves on the receiving end of various forms of exclusion, discrimination and oppression. A more equal society – including one where everyone has access to heath care as a human right – is therefore crucial to the protection of hundreds of millions and perhaps billions of people against the worst effects of climate change. Addressing these injustices adds to the capacity of communities to adapt to warming temperatures and climate instability.

5. Articulate and Advocate for a Pro-Public Shift in Policy

Nurses will continue to push for a shift toward a “public goods” approach to climate and health policy, anchored in adequately funded public services.

Current policies, committed to an investor-focused and profit-based approach to decarbonization, have failed to alter the rise of energy demand and emissions. We can prepare for a warming world, but the levels of warming that current policies will produce are likely to create a world that, by 2100, will bear little resemblance to the world of today. The problem is not lack of “ambition” or “political will”; the problem is deeply rooted in a capitalist economy that is programmed to pursue ever higher levels of extraction and exploitation of our ecosystems, including our labor. Nurses can play a crucial role in emphasizing that emissions reductions and effective adaptation measures should be seen as “public goods,” rather than as a frontier for speculation and money-making.

6. Energy Democracy: Extend Public Control Over Energy Generation and Use

Nurses understand that a successful struggle for control over energy is crucial, which is why nurses’ unions advocate for ‘energy democracy’ at all levels.

The decarbonization of energy supply and the reduction of energy demand are both essential to reducing emissions over the longer term. This can only be achieved by extending public ownership over energy generation and management. The struggle for new public energy systems anchored in a public goods approach is gaining momentum in many parts of the world. Control over energy will allow us to plan the phase out of fossil fuel use; bring socially owned renewable energy to scale, develop fully electric public transport systems, and reduce energy use in buildings. •

This report was written for Global Nurses United (GNU) by Sean Sweeney, Irene Shen and John Treat of Trade Unions for Energy Democracy (TUED). The opinions expressed herein may not reflect the policies and positions of unions participating in GNU or TUED. Full report may be downloaded as a PDF.

Sean Sweeney is Director of the Murphy Institute's International Program on Labor, Climate, and the Environment at the School of Labor and Urban Studies, City University of New York. And he writes for New Labor Forum and Trade Unions for Energy Democracy (TUED).