As Bolsonaro incinerates the Amazon, urgent action is needed for climate justice

Did South Africa need another high-profile reminder of climate chaos, after the Cape Town drought in 2015 to 2018; the two cyclones in March to April that ravaged Mozambique, Malawi and Zimbabwe and killed more than 1,000 of our neighbours; and Easter Monday’s “Durban Rain Bomb,” which dropped 170mm that day, leaving 71 people dead? 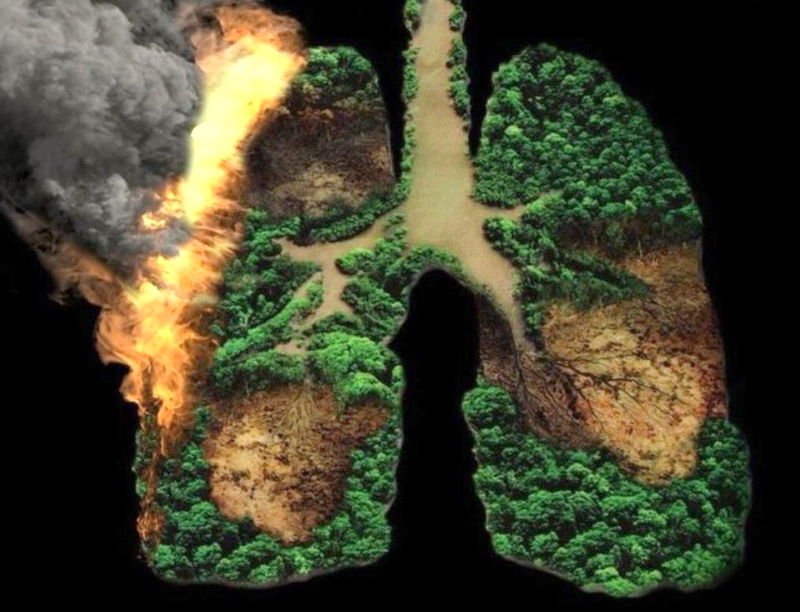 Unless we take action, extreme weather will be amplified further, by an extreme inferno. More than 72,000 fires are now raging across the Amazon, the world’s biggest and most biodiverse rainforest, which is 55-million years old. The lives of indigenous people who depend on the forest have received limited attention, with the world’s focus mainly on climate change. The Amazon is a carbon sink that stores carbon dioxide, and destroying the forest releases massive amounts into the atmosphere.

Amazon deforestation had declined 70 per cent between 2004 and 2012, thanks to the Brazilian Workers’ Party government’s clamp down on abusive plantations, logging and mining. Brazil adopted laws protecting half of the Amazon and its indigenous people, which means 80 per cent of the forest is still standing. However, 30 per cent of this area is not under legal protection.

Brazil’s new right-wing president, Jair Bolsonaro, is destroying the Amazon to benefit the elites who elected him on that platform. The result of this ecocide is an 84 per cent increase in fires in 2019 compared to 2018. The fires have mainly been set intentionally to clear land for cattle ranches, soya bean farms and palm oil plantations.

This increases the likelihood of runaway climate change. If we lose another fifth of the Amazon, a loop of ‘die back’ will be triggered: a cascade of collapse that is beyond human intervention. Overall, the Amazon forest holds about 90-billion tons of carbon, which would put the equivalent of a decade’s worth of global carbon emissions into the atmosphere.

The immediate task is to put out the fires. The growing intensity of global pressure is finally forcing Bolsonaro to act. He’s responding like a petulant child, typical of the new brand of extremely conservative leaders, accusing nongovernmental organizations of trying to make him look bad and world leaders of insulting him. He is claiming that the world is undermining Brazil’s sovereignty over the Amazon – not incorrectly given what is at stake – and has demanded an apology from French President Emmanuel Macron before accepting the G7’s paltry $20-million aid offer. Finally, last Friday, Bolsonaro called in 43,000 army troops and two aeroplanes to help to extinguish fires and stop illegal deforestation.

What can amplify the pressure further?

On social media, people post pleas to boycott products produced on deforested land. We should stop eating meat fed by those soya plantations, and reduce consumption of paper products. The world needs to demonstrate a dramatic cut in demand, because it typically takes years for markets to adjust. Aside from widespread declarations of vegetarianism, another approach would be people’s sanctions against Brazilian products so as to punish the companies that support the Bolsonaro government. The Amazon inferno is just one reason, as Bolsonaro, like US President Donald Trump, deserves sanctions on many other grounds.

According to Maria Luísa Mendonça, director of the Network for Social Justice and Human Rights in Brazil, “The international community needs to call for a boycott of the main commodities produced by agribusiness: beef, soy, sugarcane and timber. I think this is the only message that is going to have an effect in terms of pressuring the Bolsonaro administration, because he doesn’t believe in climate change and he is implementing policies that are giving a green light for deforestation.”

In mid-November, South African President Cyril Ramaphosa is due to join the Brazil, Russia, India, China, and South Africa (BRICS) summit, which Bolsonaro will host in Brasília – and what better time for a boycott, against a man who, in any case, prioritises his alliance with fellow climate-denialist Trump ahead of other considerations?

Those are some of the ‘sticks’ we need to wield, but others suggest we give Bolsonaro more ‘carrots’. Some bankers, bureaucrats and even conservative nongovernmental organizations believe in ‘commodifying nature’ by compensating the Brazilian government for protecting natural assets as ‘carbon offsets’. Could we pay Brazil not to destroy the world’s most important rainforest?

Misguided incentive schemes to protect the forest have sprouted up, such as the 2010 ‘Amazon Fund’ set up by governments in Norway and Germany, wasting millions in payments to large and medium-sized farmers. The United Nations’ so-called Reducing Emissions through forest Degradation and Deforestation (REDD) financing and similar offset schemes fall prey to all manner of scams, not to mention massive fires (as exposed at redd-monitor.org).

Asked her opinion on Democracy Now television, Mendonça responds, “Giving aid to the Bolsonaro administration? I don’t think that is going to help very much. I think we need to support indigenous communities, small farmers, that are protecting their land and who produce over 70 per cent of the food for our internal markets.” One respected group that is doing just this is Amazon Watch.

More resources for – and solidarity with – climate defenders are vital to combat the economic logic driving the climate destroyers. Agri-corporate profits from the Amazon are worth an estimated $20-billion annually.

Those in South Africa who care about climate and indigenous people’s rights have opportunities to join the struggle. September 5 is a global day of protest action, including vigils at Brazilian embassies, such as the one at 152 Dallas Avenue in Pretoria. The day before, the University of the Witwatersrand’s international relations department is hosting a People’s Climate Justice Charter workshop.

Then, on September 20, an unprecedented Fridays For Future climate strike is expected in every country, as children lead the world in demanding immediate emissions cuts and rapid adoption of 100 per cent renewable energy, plus massive investments in a green economy and society. Protest sites across South Africa include the Sasol headquarters in Sandton, the Joburg City Council and the Gauteng provincial legislature, among others.

Because of the inherited reliance on apartheid’s coal-addicted “minerals energy complex,” the average South African is the 11th-highest polluter on earth among countries with more than 10-million people. In that category, our emissions per person per unit of economic output is third-highest on earth (trailing only Kazakhstan and the Czech Republic). So we have a special obligation to act.

The carbon tax that treasury applied to big industry in June was shamefully tokenistic, at $0.43 a tonne, compared to Sweden’s tax of $132 a tonne.

And because, owing to apartheid and patriarchy, the vast majority of benefits of coal, smelting and high-carbon industry have gone largely to South Africa’s tiny rich, white, male minority, this struggle is a logical extension of long-standing local campaigns for racial, gender and class equity.

But as the tireless 16 year-old activist Greta Thunberg reminds us, it’s now a matter of generational justice – and our children are absolutely correct to exhibit rage against adults for, as they put it, stealing our future.

The burning Amazon is the clearest sign that the capitalist search for profits – damn the environmental ‘externalities’ – is at the root of the climate crisis. Instead of holding onto what we know and the comforts that we have or yearn for, those of us with a comfortable lifestyle need to question the corporate-dominated power structure and, in a personal way, commit to an existence that transcends materialist desire for consumer goodies.

But what about all the workers and communities dependent upon coal and high-carbon industry? All of us need to envisage and demand a genuine just transition from climate-threatening livelihoods, not just the empty rhetoric from politicians. An example of this is the Million Climate Jobs campaign, which, if it implemented properly, even the giant metalworkers union will support.

For the sake of our common future, the response to the climate catastrophe must be urgent, rational and fair. South African leaders and society must take a particularly strong stand, because so much is at stake, because we owe so much ‘climate debt’ to our children and neighbours, and because we have the ability to take meaningful action, personally and politically. •

This article first published on the Mail and Guardian website.

Mary Galvin is an Associate Professor in the Department of Anthropology and Development Studies at the University of Johannesburg. She holds an MA from Yale University and a PhD in political science from the University of California, Berkeley. Follow her tweets at @galvinh2o.