On April 28, a general election, for the National Congress and the Senate, was held in Spain after Prime Minister Pedro Sánchez called new elections. Sánchez is the leader of the social-liberal, pro-European Partido Socialista Obrero Español (PSO), in power since June 2018, when he led a successful motion of confidence against the government of Mariano Rajoy’s centre-right, conservative Partido Popular (PP). 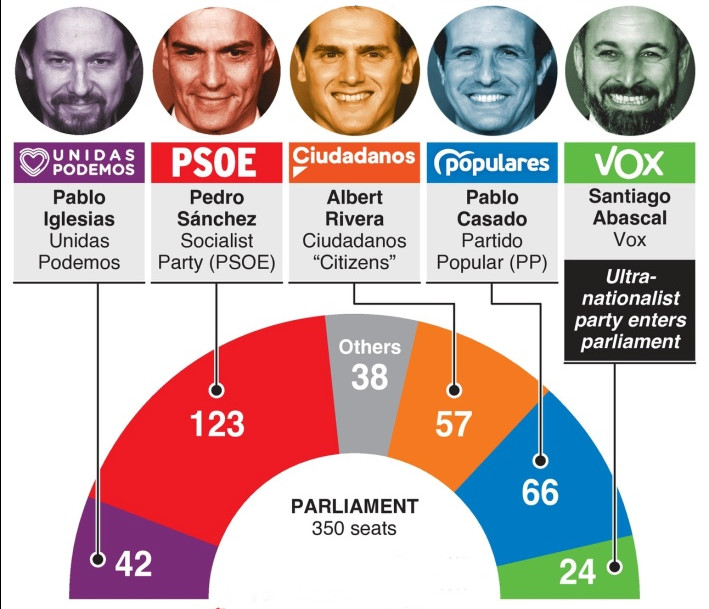 The outcome of the election casts no doubt as to who the winner is: Pedro Sánchez himself. Not only did his party win an election for the first time in 11 years but also doubled the number of deputies attained by the second-in-line, the Partido Popular, which obtained the worst result in its history. The liberal right-wing, Spanish nationalist Ciudadanos consolidated a strong third position and continued an upward progression in all districts. Unidas Podemos, left-wing populists and socialists, lost parliamentary weight and retreated in large areas of the country. Vox a party of the extreme right, Spanish nationalists, and neo-fascists, broke into the Parliament but obtained a somewhat more modest result than expected.

The turnout (75.75%) was very high, matching that of past key electoral processes including the first elections after Franco in 1977, the first victory of PSOE-Felipe González in 1982, and the victory of Zapatero after the protests against the Iraq War and the 11-M attacks in 2004. The unwritten rule in modern Spanish politics is that whenever turnout is high, the left obtains great results and usually wins. This fact alone confirms the essentially progressive character of Spanish society.

The post-Franco bipartisan system, which lasted more than three decades in Spain, is officially dead. The current parliamentary fragmentation culminates a process started in 2015, with the arrival of Podemos and Ciudadanos on the political scene, and requires a culture of pact and compromise to develop. In this scenario, the Spanish left is expected to fare much better than the right.

The outcome of this election will likely give way to a phase of institutional stability, closing the period started during the 2008 financial crisis and leading to the subsequent social, political crisis; the turmoil that stirred a cycle of citizen protests from 2011 to 2014, and the phase of political volatility that ensued from 2015 to 2018. The so-called Regime of 78, based on the new Constitution and formed as a formal parliamentary democracy with the central role of the monarchy as an institutional central arrangement, now appears to be no longer at risk. Even though the PSOE decided to form a minority government, its strong position in relation to other forces will be a gravitational factor of stability.

The PSOE itself has successfully finished a process of renewal, and has reaffirmed itself as the structuring party of the Regime of 78. While the PP’s crisis deepens, Pedro Sánchez has come out victorious within the internal battles (against the barons of the party, like Felipe González, or the Andalusian leader, Susana Díaz), returned to occupy the political centre and recovered the lost credit among the citizenship. Also, the bourgeoisie – financial and economic elites, both national and European – have regained a trustworthy ally to navigate the complicated short-term scenario in Europe, i.e., Brexit, rise of right-wing populism, etc. The Spanish Crown is very satisfied with this result as well.

The political and social Spanish right lost a golden opportunity to obtain a political majority that would serve to implement a reactionary, hard-line conservative and neoliberal agenda in Spain. The collapse of the Partido Popular, the hegemonic party of the centre-right for more than three decades, has left conservative forces fragmented and competing for a decreasing political space.

The advance of the far-right (Vox) is remarkable – they set the tone and led the electoral campaign, forcing all other right-wing parties to radicalize their narratives, but they failed in reaching the Executive, their main goal – unlike Trump, Bolsonaro, Duterte, Erdogan, Salvini, and Orban. This represents a potentially very important symbolic defeat, especially considering the upcoming European elections next month. In any case, the arrival of Vox to Spanish politics shows that the far-right does not need to be in government to contaminate the agenda and public debate. The Parliament will be a privileged platform which will be used to consolidate its confrontational and hateful discourse, thus increasing its visibility.

The top bureaucrats in Brussels are breathing a sigh of relief. Just one month ago, the victory of the Forum for Democracy in the Dutch election unleashed panic in the European institutions at the possibility that the growth of Vox put Spain in the orbit of far-right populism. With a hard-Brexit scenario more likely than ever, the European establishment in Brussels, as well as France and Germany, is happy to find a stronger ally in Pedro Sánchez.

The working class and its demands/interests were almost totally absent from the debates during the campaign. The Catalan Procès, and the social and political upheaval it created, was strategically used by the right to build an agenda based on topics like the defence of Spain against separatism, the risk of immigration, insecurity, etc., all played out with a confrontational tone and maximalist identitarian approaches. Only Unidos Podemos made an honest attempt to bring economic inequality, poverty, the eviction crisis, the retreat of the welfare state, etc., as topics for discussion during the campaign.

The far-right chose women and feminists as one of its favourite enemies. Accordingly, the response of the female vote was resounding: women, above all, but also young people and the working class, held back the advance of the right. The feminist wave that has been growing in Spain, as well as other countries in the world, has proven not only its potential for hegemony, but also a strong capacity to tactically resist the advance of fascist forces. In this sense, these elections could have an important ideological projection for the future.

The Basque and Catalan nationalist and independentist parties fared extremely well, and this happened as the three parties of the right massively failed in both territories. In the Basque Country, the three parties of the right didn’t manage to obtain a single deputy, while socialist, independentist EH Bildu reached its historical maximum, and the nationalist, conservative Partido Nacionalista Vasco (PNV) consolidated its first position in the region. In Catalonia, the republican, independentista party Esquerra Republicana won a resounding victory, and together with JxSí, comprising nationalists and neoliberals, consolidated a strong presence of the Procès/independentist parties in Madrid. Ciudadanos maintained an important presence in Catalonia (especially in Barcelona), and the PP collapsed: it obtained a single deputy, whereas Vox gained one. Two ideas arise from these outcomes: first, the right wing does not want to do politics in Catalonia or Euskadi, but they use confrontation to make gains in the rest of Spain, but this strategy has failed; and second, contrary to what the right-wing forces have tried to argue, the Spanish people want dialogue and politics, and reject the agenda of repression and confrontation.

After several years with a reduced representation, or absence from Parliament altogether, the Communist Party of Spain (PCE) took five deputies to Congress under the candidacy of Unidas Podemos. The most prominent communist MP is Enrique Santiago, Secretary General of the PCE, an expert in Latin American politics and a lawyer close to human rights organizations and the peace process in Colombia.

The moderately positive outcome of the election – the far-right was stopped, the government remaining progressive – shouldn’t let us forget the weakness of social and popular organizations in the Spanish State as a whole. Before the crisis, mass organizations and social struggles were undermined whenever the PSOE obtained a strong electoral result. The exceptional circumstances of this election, as well as the successful process of renewal of the PSOE, could further weaken the social and organizational dynamics of militant organizations – how many more times will social democracy manage to deceive the people? However, there exist examples of conscious and active groups: Basque pensioners demonstrated today in Bilbao, demanding an increase in retirement pensions. Furthermore, Comisiones Obreras (Workers’ Commissions), the largest union in Spain, warned Pedro Sánchez today that they expect a clearer focus on policies in favour of the working class from now on.

On May 26, municipal elections of town councils, regional elections of regional parliaments, and European elections will be held in Spain. These new elections will define further the tendencies pointed out yesterday, and their projection toward local and European politics. There is still a sense of an emerging moment, and therefore, until after 26 May, it is unlikely that the formation of the new government will be announced.

The PSOE has several options. The first is to form a minority government – common in other countries but foreign to the political culture of Spain. The second is to count on the support of Unidas Podemos and use the support of one or several independentist forces to appoint Pedro Sánchez as president. Finally it could sign a deal with Ciudadanos but this is unlikely, since it would be viewed very unfavourably by the socialist bases and, from the point of view of Ciudadanos, it would compromise its intention to become the new hegemonic party of the Spanish right, a longer-term goal. In any case, the government – led by the PSOE, no matter what – that will come out of these elections will be stable and will have the approval of the European institutions. •

Iván Orosa Paleo researches social movements, local government and cultural industries. He is affiliated with the University of Groningen.