Anyone who still entertains any illusions in the ‘progressive’ nature of the Trudeau Government of Canada, would have been shocked to witness the Minister of Foreign Affairs, Chrystia Freeland, assembling a collection of regional representatives of the Washington Consensus in Ottawa, on February 4, to further the coup plot against Venezuela. The so called Lima Group that she brought together dutifully issued a statement calling for the “national armed forces of Venezuela to demonstrate their loyalty to the interim president in his constitutional functions as their commander in chief.” 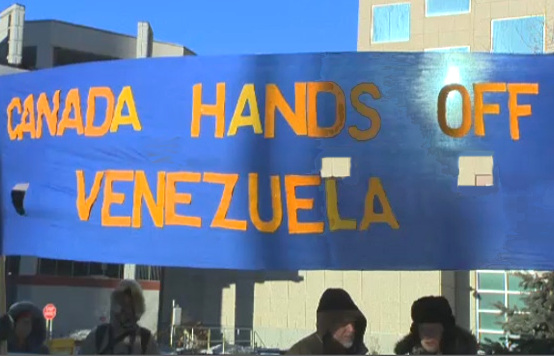 Despite the progressive pretensions of the Liberal Government in Ottawa and the ill deserved reputation that Canada has for ‘peacekeeping’ and for being a moderating influence in international affairs, the present course under Trudeau and Freeland is quite consistent with the country’s role as the other G7 power in North America, a global exploiter in its own right.

In truth, when Freeland adopts the tone of U.S. Manifest Destiny and speaks of Latin America and the Caribbean as Canada’s “neighbourhood” she is only being a little more public than others might be about a perspective that dominates the thinking and behaviour of Canadian government and Big Business. The rapacity of Canadian mining operations in Latin America is without rival. The promotion of business interests has led to major Canadian involvement in the suppression of democratic rights and the imposition and preservation of compliant right-wing regimes. Canada was heavily involved in the 2004 coup that overthrew the democratically elected Aristide Government in Haiti and the horrors that followed this. A similar pattern exists with regard to the suppression of democracy in Honduras. Canadian Government leaders express fake outrage over the supposed denial of democratic rights in Venezuela even as they maintain a stoney silence on continuing repression in Honduras.

When it comes to Venezuela, the official line of the Canadian Government is that efforts to destabilize the Government of that country only began with Maduro’s call for a Constituent Assembly in July 2017. This, however, is a complete falsehood as an article by Yves Engler amply demonstrates. Links to right-wing opposition forces go back to at least 2005 and “Canada is the third most important provider of democracy assistance,” as support for those working to return Venezuela to a place within the Washington Consensus is ironically described. However, during the past eighteen months, the orchestrated economic problems in Venezuela, the belligerence of the Trump Administration and the right-wing tide in much of the region have created a much greater resolve in Canadian ruling circles to intensify the attack on the Maduro Government and to try to open the country to unbridled plunder and exploitation.

When Washington’s carefully groomed and well trained puppet, Juan Guaido, staked his claim to the role of ‘interim president’, the Trudeau Liberals in Ottawa were as ready as the Trump Administration in Washington to play their part. Canadian diplomats worked to unify the opposition forces, to line up as much international backing for their appointed stooge and leading Canadian politicians did all they could to present Guaido’s blatant violation of the Venezuelan Constitution as a legitimate quest for the ‘restoration of democracy.’

The most important role of Canada, however, lies in the fact that it’s track record of exploitation and domination in Latin America, while considerable in its own right, is not as massive or infamous as the conduct of U.S. imperialism in its self declared ‘backyard.’ The Canadian Government was, therefore, less compromised and better placed to co-ordinate the key role of compliant, right-wing regional regimes. The Lima Group was formed in 2017, with Canada playing a leading role and the U.S. staying out of the affair. It brought together the governments of those Latin American and Caribbean countries that were ready to openly attack Venezuela to an extent that the Organization of American States (OAS) could not be won over to. Foreign Affairs Minister Freeland has played a tireless role in trying to recruit new members to her nasty little club.

When Freeland assembled the representatives of the governments of Canada, Argentina, Brazil, Chile, Colombia, Costa Rica, Guatemala, Guyana, Honduras, Panama, Paraguay, Peru and Saint Lucia in Ottawa on February 4, she worked to craft an artful final statement that would avoid any call for direct military intervention from outside Venezuela while working to strengthen internal opposition and maximize the possibility of the military changing sides. As stated at the outset, a direct call to the military was featured in the statement. News reports show how this is now being followed with a strategy designed to draw sections of the Army into conflict with the Maduro Government. Two days after the Lima Group meeting, a provocative ‘humanitarian aid convoy’ approached the Columbian-Venezuelan border where it was blocked by troops. “The main goal now is to look to break the military – and the humanitarian aid is basically the Trojan horse to try to do that,” observed one commentator, aware of the effort to generate tensions between Maduro and the military leadership.

As the unholy alliance of imperialist powers and compliant regimes deepens the attack on Venezuela, the Trudeau Government can be expected to play a leading and despicable role in the affair. Within Canada, there is opposition. Some elected members of the social democratic New Democratic Party (NDP) have expressed a level of criticism of the Liberal Government’s conduct. The top leadership of the Party, however, has played a sad role. As I write this, the NDP Foreign Affairs Critic, Hélène Laverdière, has openly supported Washington’s puppet president and claimed she speaks for the parliamentary party. NDP leader, Jagmeet Singh, continues to take the less than impressive public position that he doesn’t know who the rightful President of Venezuela is. Trade union support for the people of Venezuela and their struggle in the face of threat is significant in Canada and the media is furiously attacking trade unions that show such support. There have been protests in solidarity with Venezuela and the meeting of the Lima Group itself in Ottawa was directly confronted by protesters.

Chrystia Freeland and the Trudeau Liberal Government are part of a systematic effort to ensure that the same agenda of austerity, privatization and environmental despoilation that has made gains in other Latin American countries is imposed without pity on Venezuela. Yet, resistance to the role of super exploited powerlessness has a long history south of the Rio Grande. Masses of people in Venezuela know that the ‘democracy’ the Trump Administration wants for them is too horrible to submit to. They know that the battle cry for freedom and democracy in their part of the world is ‘Yankee Go Home!’ They are also learning to their cost that the Ugly Canadian needs to be driven off at the same time. •