Imperialism and Capitalism: As American as Apple Pie?

In the midst of the U.S. Civil War (1861 – 1865), as somewhere between half a million to three quarters of a million bodies lay dead from bullets and disease, Emanuel Leutze completed a painting titled Westward the Course of Empire Takes Its Way for the U.S. Capitol. The painting celebrated empire as central to American history. Included in the final draft of the painting was a free black man, subordinate to the leadership of the white men forging the path of empire across the continent; supposedly saved from slavery with their leadership.1 Of course, as W.E.B. Du Bois famously discussed, central to the Civil War was the “general strike of the slaves”; their resistance was key to abolition. Regardless, Leutze’s painting was one representative of the broader trend, going back to the initial creation of an independent American government, in which so-called democracy and freedom were felt through the vision of empire. 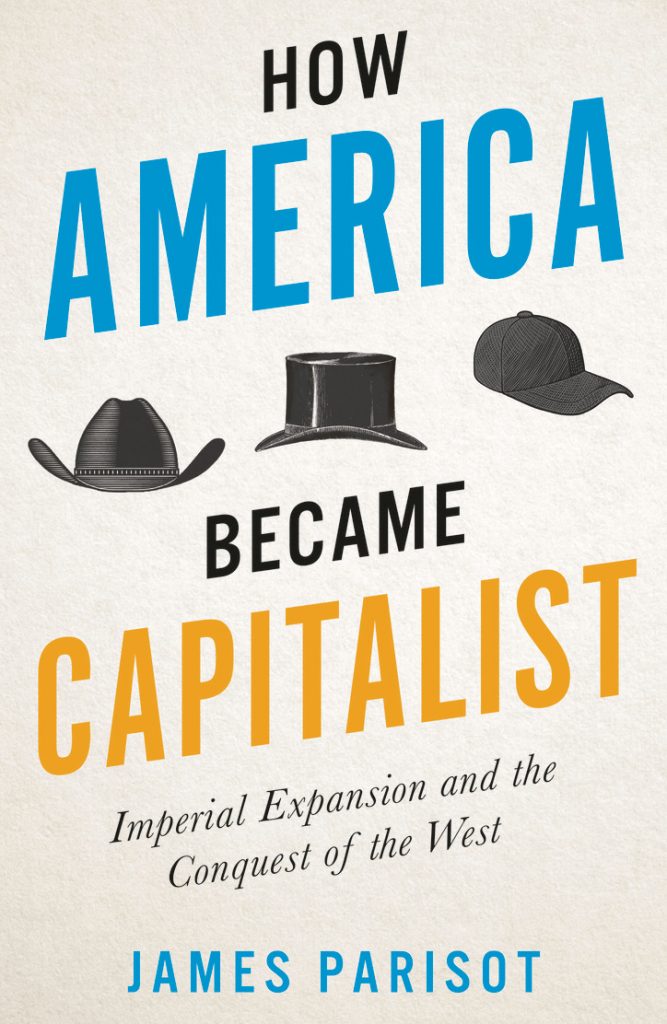 White settler colonialism, though, always had a complicated relationship with capitalism. While most Americans today embrace capitalism as normal, this was not always the case. It was to an extent in the South. In the beginnings of empire in the 1600s here, the Virginia Company’s investment capital led to the production of tobacco on a large scale for profit produced initially by white indentured servants and then black slaves. This led to a trajectory of racialized capitalist empire as state regulations were created to divided white from black, as, for instance, laws banning interracial marriage were put in place to organize social relations along racial lines so that the colony elite could build consent for their power among poorer whites who could insist, for all their troubles, ‘at least I am not black’.

But in the north, circumstances were different. Rather than elite gentlemen-capitalists, poor white servants, and slaves, middling families moved across the ocean, escaping pressures of land dispossession in England. The type of society that formed in the north meant that, as one historian put it, “the equality of the society was nothing less than the equality of economic interests which lies at the heart, not of modern pluralistic democracy, but of Marxist Leninist democracy.”2 White settlers organized their communities around a communal orientation in which religious obedience triumphed over the power of capitalism. Production was not primarily oriented toward profit, but sustaining the colony. While some merchant activity did occur, it was done within the confines of what was acceptable to the religiously oriented social hierarchy. For instance, the prominent merchant Robert Keayne was repeatedly in trouble with colonial society, accused of overcharging for goods and he wrote his last will and testament defending himself against these charges.3 In general, land, housing, trade, and the movement of peoples were all regulated according to the moral economy of colonial society rather than the power of capitalism.

Through the colonial era and beyond, the white settler empire was consolidated and celebrated through the ethnic cleansing of native peoples. As one commentator put it in the 1830s:

“whatever colour poetry may lend to the removal of the Indians, it is, nevertheless, but the removal of a sick bed from a place where death is certain, to one from which it is more remote. Neither is it the death of youth or of manhood, but that of old age and decrepitude, which the Indian is doomed to die; and in his mouldering ashes germinates the seed of empires, destined to change the world.”4

Empire was built through the elimination of native peoples as even the Christianized and relatively assimilated Delaware community in Gnadenhutten, Ohio were massacred in a bloodbath of nearly 100 people in 1782.

The battle over empire also played a role in causing the American Revolution in the first place. Following Pontiac’s Rebellion, as, over time, native peoples grouped together to challenge the path of empire, the British enacted the Proclamation Line of 1763. This limited the extent to which settlers could legally expand west, upsetting many British subjects. Thus from the start, as the so-called founding fathers organized their ‘democratic’ Constitutional Convention in Philadelphia in 1787 by locking all the doors and putting guards at the building, the idea of the United States was created as an imperial idea. The ideology of ‘Manifest Destiny’, born in the 1840s, was simply the result of the basic organization and goal of the American state: to conquer western space, eliminate native peoples, and spread whiteness across the territory.

Imperialism was also a gendered process. White men travelled to the frontier as a performance of their manhood. They conquered the ‘virgin’ territory, forcing their wives, children, and slaves to follow, leaving all their social connections behind. Whiteness and masculinity were continually reproduced on the edge of empire.

The relationship between empire and capitalism was always a complex one, though. In the north, while speculators (such as President George Washington) saw the west as a vast open space to generate profit from through land speculation, for the small farmer patriarch, his goal was to build what was called, at the time, ‘competency’. This meant to own a farm, and produce primarily for the household, with only small amounts of market production if necessary for goods that could not be made at home. Rural communities would organize their labour on a patriarchal household basis with a gendered division of labour as men tended to farm, hunt, and so on, while women and children took care of more domestic tasks including cooking and cleaning. But when it came time to build a farm or shuck corn, among other activities, all the neighbours came out in a festival of work, in which the household organizing the event would supply food and, most importantly, whisky.

Meanwhile, while some northerners had the idealistic idea that somehow slavery would die out as it expanded across the southern half of the west and became more diffuse, rather, the opposite happened. As the cotton boom took off in the 1820s and 1830s, so slavery was intensified and invigorated, pushing the empire of slavery as far as the Texas frontier. The revolution of white settlers in Texas against Mexico, for instance, was in part pushed by the fact that Mexico wanted to regulate and even abolish slavery: white slaveowners in Texas, of course, did not.

Plantation slavery pushed expansion across the south. This was driven by a ruthless form of capitalism organized along racial lines in which not simply the working time of the labourer was purchased, but the total body of the labourer themselves. That being said, not all of the south was large plantations. Scattered throughout the south in the ‘pine barrens’ and less fertile – and therefore less profitable – areas, small farm households, similar to those in the north, but in some cases with a slave or two, existed. And holding the entire social structure together was racism and the idea of black and native American inferiority.

Over many decades, though, what aspects of non-capitalist (but still patriarchal and racist) life in North and South existed were gradually destroyed. The remaking of the state before, during, and after the Civil War also played a key role in creating the political conditions for capitalism. The Republican Party formed in the North as a messy alliance between different groups all with an interest in limiting the expansion of slavery, and through the 1850s ‘free labour’ ideology gradually took off, as the idea of American ‘freedom’ shifted from independence from market dependence and control over one’s labour to being a wage labourer. And Democratic Party ideology shifted toward ‘acceptance of the results of the war’,5 as the post-war southern black population was resubordinated to white power through the rise of sharecropping and as northern capital moved south in what was now a more accessible zone of investment.

By the time settlers pushed to the midwest and southwest, through Montana and Colorado, and on to California, the forces driving empire were decreasingly those of small patriarchal farm families. Rather, agribusiness took control of the midwest as Chicago became the central transportation network of the region. In places like Montana and Colorado the Army Corps of Topographical Engineers surveyed the resources, mapping an advanced path for capital to take control of and exploit through mining and resource extraction. And by the time empire reached the Pacific Coast, capitalism in California took off (fueled by the famous Gold Rush), organized around a complex amalgam of Chinese, Latin American, black, white, and immigrant workers.

Even by the 1870s and 1880s, though, some pockets of small farms remained. Just as today, capitalism is never entirely ‘pure’; non-capitalist relations exist scattered throughout the world. Most significantly, northern politicians were able to use the Civil War to pass the Homestead Act in 1862 which distributed land to small farmers moving west. But the amounts of land which went to these farmers dwarfed in comparison to the giant land grants given to railroad companies and capitalist interests who remade ‘the west’ in the image of capital.

Through this history, then, empire became capitalist. From here, the domestic basis was created for the global expansion of American Empire: an international process with no end in sight. •

James Parisot currently (precariously) teaches at Drexel University in Philadelphia. This article is based on his forthcoming book, available for pre-order with Pluto Press, How America Became Capitalist: Imperial Expansion and the Conquest of the West.