The advisor on healthcare to the Ontario Conservative Government of Doug Ford, Rueben Devlin, released his report on January 31 with the headline that “more hospital beds will not solve hallway medicine,” subtly twisting – and contradicting – the Ford government’s election pledge. The Ontario Health Coalition immediately called the report out. Mr. Devlin, it should be noted, has a long history of driving cuts in the health sector and neoliberalizing delivery. He is the former CEO of Humber River Regional Hospital in Toronto, where, under his leadership, three entire hospitals were closed and replaced with one privatized P3 hospital that had too few beds to serve its catchment population. 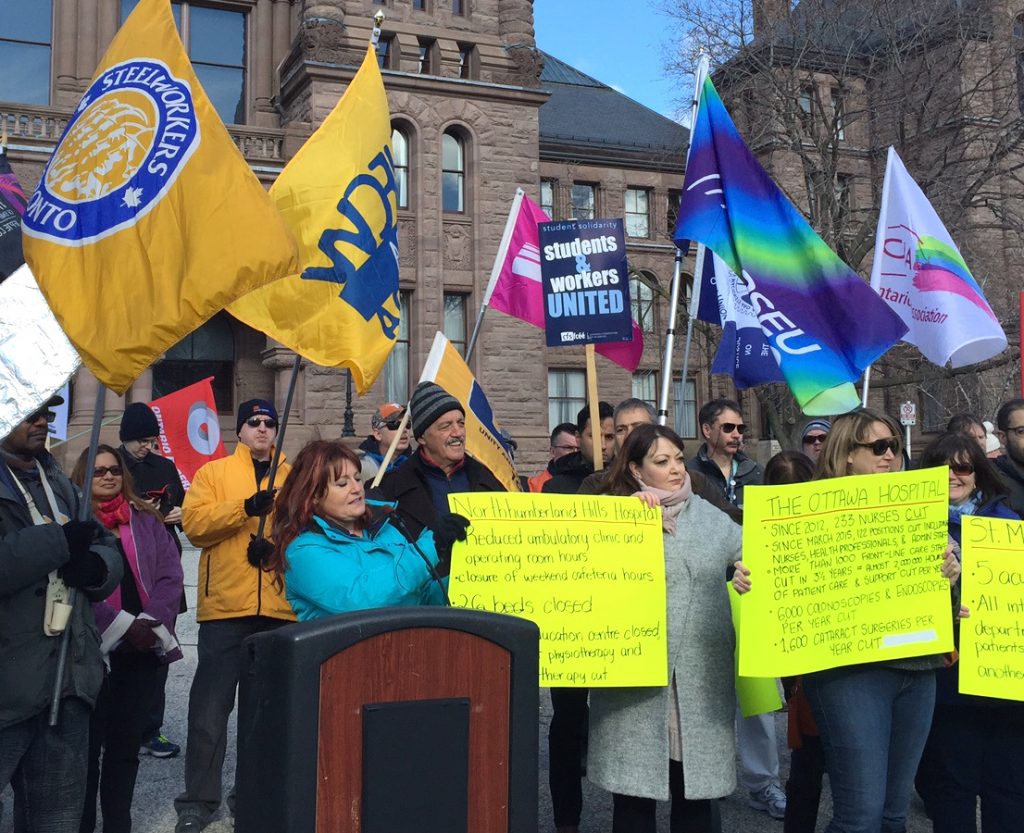 The former Liberal government re-opened mothballed hospital sites to deal with the overcrowding and lack of capacity at Humber River and other regional hospitals. Devlin was also the President of the Ontario Conservative Party during the Mike Harris years in which Ontario’s hospitals suffered massive restructuring. In order to cut $800-million, the Harris government spent $3.9-billion in restructuring costs, according to the Provincial Auditor. Local governance and democratic hospital boards were eliminated from dozens of communities, reams of hospitals were closed, and, ultimately, the restructuring led to the devastation of services in many medium and smaller hospitals.

The Ontario Health Coalition regularly reports on Ontario’s standing in terms of hospital funding and measures of capacity and outcomes with the rest of Canada and many other countries. They report that:

Warnings about hospital overcrowding have been repeatedly provided to Ontario’s government. The following backgrounder contains recent reports and warnings about the problem from Ontario’s Auditor General, Health Quality Ontario, and the Canadian Association of Emergency Physicians. It also contains data from the Canadian Institute for Health Information comparing hospital bed capacity across Canada and the OECD, comparative hospital nurse staffing levels and public hospital funding. The evidence is irrefutable. Ontario has cut more hospital beds and staff than any virtually all peer jurisdictions. Ontario has dropped to the bottom of the country in public hospital funding. The resulting hospital bed shortage and serious overcrowding situation compromises patient and staff safety. Ontario’s government must urgently reopen hospital beds and restore capacity to safe levels.

The Coalition called on the Ontario government to take responsibility for planning for hospital services in our province, as is required under the Canada Health Act, including:

Ontario’s Auditor General describes the situation in Ontario’s large community hospitals in her most recent report, released on November 30. Her findings support the evidence that the Ontario Health Coalition has brought to the government repeatedly in recent years. Among the Auditor General’s findings: (Page references for the 2016 Ontario Auditor General’s Report are included here.)

The Auditor General describes the consequences of chronic underfunding and the failure to plan to meet population need for care:

Even Health Quality Ontario, though it studiously continues to refuse to mention Ontario’s shortage of hospital beds, regardless of the evidence, included a warning about how close the system is to critical in its November 2016 report on emergency departments:

“Patients are already lying in hallways and being seen by doctors in waiting rooms. Under current conditions, the ability of Ontario’s emergency departments to care properly for patients could be seriously compromised by an occurrence as predictable as a bad flu season or as unpredictable as a SARS outbreak or a major weather event.” (page 3)

Position Paper from the Canadian Association of Emergency Physicians

The Canadian Association of Emergency Physicians has repeatedly warned about dangerous levels of emergency department overcrowding. Among the key causes they cite is the Canada-wide shortage of hospital beds, a situation that is more severe in Ontario than other provinces. Here is a description of the situation from their position paper on emergency department overcrowding:

“With the shortage of hospital beds and recurring issues with acute care capacity, hospitals increasingly face a situation where more patients require admission than there are beds to accommodate them. The current approach to dealing with Access Block due to hospital crowding involves delaying the outflow of admitted patients into appropriate inpatient areas; resulting in an excessive and unsafe use of EDs to inappropriately ‘warehouse’ admitted patients, both stable and unstable, for long periods of time. This ‘boarding’ of admitted patients within the ED results in EDOC and thus creates delays in seeing new patients presenting to the ED. Surveys have shown that patients attempt multiple other options prior to accessing the ED. Moreover, patients of lower acuity and urgency do not occupy acute care stretchers, require little nursing care, and typically have brief treatment times. The myth of ‘inappropriate use’ should be permanently dispelled, and administrators and politicians should be encouraged to avoid attributing EDOC to ambulatory patient ED health services access…. The lack of acute care beds in Canada means that most hospitals frequently operate at unsustainable occupancy rates of higher than 95%, a level at which regular bed shortages, periodic bed crises, and hospital overcrowding are inevitable. Functioning at capacities above 95% occupancy does not allow for flexibility in the system to accommodate the natural peaks in patient volumes and admissions that will periodically occur.” Affleck et al., CMAJ 2013, Pages 362-363.

By the Numbers: Comparative Data Shows Ontario Ranks at the Bottom in Key Indicators of Hospital Care Levels

Not only has Ontario cut more hospital beds than any other province in Canada, we also now rank at the bottom of international data on hospital beds per population. Compared to 33 countries of the OECD, Ontario is third last in hospital beds per capita, followed only by Mexico and Turkey.

As hospital beds continue to be cut and closed down, nurses, health professionals and support staff have also been cut dramatically. Ontario has dropped to the bottom of the country in nurse to patient ratios. Data from the Canadian Institute for Health Information shows that Ontario now has the least hours of nursing care per hospital patient. Yet nurse staffing levels continue to be cut.

The above data gives a statistical overview of some key indicators of hospital service levels in Ontario compared to other jurisdictions in Canada and internationally. The following section measures hospital funding compared to other provinces in Canada. As noted above, Ontario’s government has set global hospital operating funding increases below the rate of inflation for 9 consecutive years – the longest period of hospital cuts in our province’s history. Until this year, hospital global funding had been frozen for four years in a row. Today, by all measures, Ontario has dropped far below the other provinces in hospital funding.

Measured on a per capita basis, the most recent data from the Canadian Institute for Health Information National Health Expenditures Database shows that Ontario ranks second-last in hospital funding. For the last few years, Ontario and Quebec have traded places for lowest ranking in the country. We are significantly below the national average. In fact, Ontario’s government funds our public hospitals $501 less per person than the average of the other provinces.

Hospital spending per person is a clear comparison of how many resources our government is allocating to these services. To measure economic sustainability or affordability, GDP (which measures economic output) is used as the comparator. As measured as a percentage of provincial GDP, the results are the same. Ontario is second last in Canada, followed only by Saskatchewan which saw significant GDP growth in recent years. This measure shows that Ontario has room to improve hospital funding while keeping funding at sustainable levels, as long as funding goes to improving services.

Sustainability can also be measured in terms of expenditure as a proportion of the provincial budget. In Ontario, hospital funding as a share of the provincial budget has been declining for decades. The most recent data show that we are third last among Canadian provinces for hospital spending as a proportion of total program spending. Again, the data show that we are considerably lower than the average of the other provinces and there is room to improve hospital funding to stop the cuts and restore service levels to meet population need.

Ontario has not conducted a hospital bed study to measure population need and assess how many hospital beds should be planned for more than twenty years. To the extent that data is being used in planning at all, the numbers that are being used are two decades out of date. Instead of using an evidence-based planning approach, Ontario’s health policy has centred on constraining hospital budgets, cutting services and reducing patient length of stay. As a result, Ontario is suffering from a shortage of hospital beds and services that is negatively affecting patients’ access to care and safety.

Ontario’s hospital occupancy levels are extraordinarily high. According to Ministry of Health data, by 2010 there were, on average, 30,164 inpatients in Ontario’s 30,810 hospital beds. The provincial hospital bed occupancy rate is 97.8%, much higher than other jurisdictions. By comparison, the OECD reports an average occupancy rate for acute care beds of 75%. In the United States, the average hospital occupancy rate is 68.2%.1 Most often cited in the academic literature, a target hospital occupancy rate to reduce access blockages and improve outcomes is 85%. The consequences of hospital overcrowding warrant public attention. Within hospitals, overcrowding is associated with serious quality of care issues. Overcrowded emergency departments do not have appropriate staffing ratios for critical care or intensive care patients who require intensive monitoring by specially trained staff. Across Europe, hospital occupancy rates have been cited as a determining factor in hospital-acquired infections (HAIs), and indeed Ontario has experienced repeated waves of Hospital Acquired Infection outbreaks. Cancelled surgeries and prolonged waits are associated with poorer health outcomes. Ontario’s extremely high occupancy poses a significant threat to patient safety and quality of care.

Its not the flu: it’s a chronic condition

Emergency room overcrowding is epidemic among large and medium-sized community hospitals in Ontario, and a frequently noted factor in ER wait times is the unavailability of acute care beds.2 In 2011, Ontario had, on average 592 patients waiting in emergency departments for admission to an inpatient bed. This represents almost 4% of Ontario’s total acute care beds.3 A study by Ontario researchers has demonstrated that long waiting times increase the risk of death and hospital readmission for patients who have been discharged from the emergency department. This study, published in the British Medical Journal looked at 22 million patient visits to Ontario emergency departments over a five year period, and found that the risk of death and hospital readmission increased with the degree of overcrowding at the time the patient arrived in the emergency department. The authors estimate that if the average length of stay in the emergency department was an hour less, about 150 fewer Ontarians would die each year.4

Not only is there a problem getting into hospitals, there is also a serious issue of patients being discharged too early and without placement in home care and in long term care homes. The Advocacy Centre for the Elderly reports that they receive frequent complaints from patients who are subject to pressure tactics to move them out of hospitals.

Hospital policies may include statements that if person refuses to pick from short lists of long term care facilities that are not of their choosing, or if the patient refuses to take first available bed, then will be charged a large per diem ranging from $600 a day to $1800 a day.5 In many cases the charges levied against patients in an attempt to move them out of hospital are unlawful.

In addition to reduced hospital beds and shorter lengths of stay for hospital patients, entire departments have been systematically cut from local hospitals. Outpatient rehabilitation, social work, laboratories and an array of outpatient services have been slashed. In many cases this care is moved far away from patients’ home communities, privatized and subject to new user fees, or simply inaccessible.