The Socialization of Society

One hundred years ago this month, on January 15, 1919, the great revolutionary thinker and anti-war activist, Rosa Luxemburg, was murdered in Berlin by the Freikorps paramilitary group, with her body dumped into the Landwehr Canal. Her comrade in opposition to the Social Democratic Party of Germany support for German involvement in World War 1, and in splitting from the SPD to eventually form the Communist Party of Germany, Karl Liebknecht, was also murdered in the course of the same events. Luxemburg occupies a special place in the traditions of the global left for her powerful political interventions and ceaseless invocation of revolution to break the hammerlock of capitalism on democracy and development, and for her major economic text, The Accumulation of Capital (1913), linking capitalist development to dispossessions, imperialism and militarism. Her searing critique of capitalist democracy was central to a political strategy that combined an insistence on the capacity for revolt and self-organization of the masses with recognition of the role of the socialist party in education, agitation, and parliamentary representation and struggle in the interests of the working classes. One hundred years on, Luxemburg remains a source of political inspiration and integrity for socialists around the world. 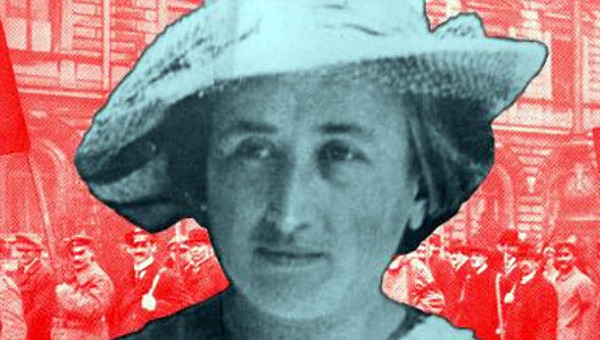 We reprint here her call (published in December 1918) for political control of the state and socialization of the economic system in the midst of the German revolts of 1918-1919. “While we are enlisting fighters for the revolution, we are creating Socialist workers for the future, workers who can become the basis of a new social state…. There is still an old world to be overthrown. A new world must be built!”

The revolution that has just begun can have but one outcome: realization of Socialism! The working class, in order to accomplish its purpose, must, first of all, secure entire political control of the state. But to the Socialist political power is only a means to an end. It is the instrument with which labour will achieve the complete, fundamental reconstruction of our entire industrial system.

Today all wealth, the largest and most fruitful tracts of land, the mines, the mills and the factories belong to a small group of Junkers and private capitalists. From them the great masses of the labouring class receive a scanty wage in return for long hours of arduous toil, hardly enough for a decent livelihood. The enrichment of a small class of idlers is the purpose and end of present-day society. To give to modern society and to modern production a new impulse and a new purpose – that is the foremost duty of the revolutionary working class.

To this end, all social wealth, the land and all that it produces, the factories and the mills must be taken from their exploiting owners to become the common property of the entire people. It thus becomes the foremost duty of a revolutionary government of the working class to issue a series of decrees making all important instruments of production national property and placing them under social control.

But this is only the first step. The most difficult task, the creation of an industrial state upon an entirely new foundation, has only just begun.

Today, production in every manufacturing unit is conducted by the individual capitalist independently of all others. What and where commodities are to be produced, where, when and how the finished product is to be sold, is decided by the individual capitalist owner. Nowhere does labour have the slightest influence upon these questions. It is simply the living machine that has its work to do.

In a Socialist state of society all this will be changed. Private ownership of the means of production and subsistence must disappear. Production will be carried on not for the enrichment of the individual but solely for the creation of a supply of commodities sufficient to supply the wants and needs of the working class. Accordingly factories, mills and farms must be operated upon an entirely new basis, from a wholly different point of view.

In the first place, now that production is to be carried on for the sole purpose of securing to all a more humane existence, of providing for all plentiful food, clothing and other cultural means of subsistence, the productivity of labour must be materially increased. Farms must be made to yield richer crops, the most advanced technical processes must be introduced into the factories, of the mines only the most productive, for the present must be intensively exploited. It follows, therefore, that the process of socialization will begin with the most highly developed industries and farm lands. We need not, and will not deprive the small farmer or artisan of the bit of land or the little workshop from which he ekes out a meager existence by the work of his own hands. As time goes by he will realize the superiority of socialized production over private ownership and will come to us of his own accord.

In order that all members of society may enjoy prosperity, all must work. Only he who performs useful service to society, manual or mental, will be entitled to a share of products for the satisfaction of his needs and desires. Idleness must cease and in its stead will come universal compulsory labour for all who are physically capable. Obviously those who are unable to work, children, invalids and the aged, must be supported by society. But not as it is done today, by paltry alms. Bountiful sustenance, socialized education for the children, comfortable care for the aged, public health service for the sick – these must form all important part of our social structure.

For the same reason, i.e., in the interest of general welfare, society will be more economical, more rational in the utilization of its commodities, its means of production and its labour power. Waste such as we find today on every hand, must cease. The production of munitions and other implements of warfare must pass out of existence, for a Socialist state of society needs no tools of murder. Instead the precious materials and the enormous labour power that were devoted to this purpose will be used for useful production. The manufacture of useless and costly foolishness for the edification of wealthy idlers will stop. Personal service will be prohibited, and the labour power thus released will find more useful and more worthy employment.

While we are thus creating a nation of workers where all must be productively employed for the general welfare, labour itself must be completely revolutionized. Today labour in industry, on the farm and in the office is usually a torture and a burden to the proletariat. men and women work because they must in order to obtain the necessities of life. In a Socialist state of society, where all work together for their own well-being, the health of the individual worker, and his joy in his work must be conscientiously fostered and sustained. Short hours of labour not in excess of the normal human capacity must he established: recreation and rest periods must be introduced into the workday, so all may do their share, willingly and joyously.

But the success of such reforms depend upon the human beings who will carry them out. Today the capitalist with his whip stands behind the workingman, in person or in the form of a manager or overseer. Hunger drives the worker to the factory, to the Junker or the farm-owner, into the business office. Everywhere the employer sees to it that no time is wasted, no material squandered, that good, efficient work is done.

In a Socialist state of society the capitalist with his whip disappears. Here all workingmen are free and on an equal footing, working for benefit and enjoyment, tolerating no waste of social wealth, rendering honest and punctual service. To be sure, every Socialist plant needs its technical superintendents who understand its workings, who are able to supervise production so that everything runs smoothly, to assure an output commensurate with the labour power expended by organizing the process of manufacture according to most efficient methods. To insure successful production the individual workingman must follow his instructions entirely and willingly, must maintain discipline and order, cause no friction or confusion.

In a word: the workingman in a Socialist industrial state must show that he can work decently and diligently, without capitalists and slavedrivers behind his back: that of his own volition he can maintain discipline and do his best. This demands mental discipline, moral stamina, it demands a feeling of self-respect and responsibility, a spiritual rebirth of the workingman.

Socialism cannot be realized with lazy, careless, egotistic, thoughtless and shiftless men and women. A Socialist state of society needs people everyone of whom is full of enthusiasm and fervor for the general welfare, full of a spirit of self-sacrifice and sympathy for his fellow men, full of courage and tenacity and the willingness to dare even against the greatest odds.

But we need not wait centuries or decades until such a race of human beings shall grow up. The struggle, the Revolution will teach the proletarian masses idealism, has given them mental ripeness, courage and perseverance, clearness of purpose and a self-sacrificing spirit, if it is to lead to victory. While we are enlisting fighters for the revolution, we are creating Socialist workers for the future, workers who can become the basis of a new social state.

The young people of the proletariat are obtained to carry out this great work as the true foundation of the Socialist state. They must show, even now, that they are equal to the great task of bearing the future of the human race upon their shoulders. There is still an old world to be overthrown. A new world must be built! •

Rosa Luxemburg (1871-1919) was a Polish Marxist theorist, philosopher, economist, anti-war activist, and revolutionary socialist. She was a long-standing member of the German SPD and also a founding member of the Communist Party of Germany (KPD). Her writings are archived at marxists.org/archive/luxemburg.