Ruling elites stand naked. No more hoping for a rising tide to lift all boats. No more waiting for the trickle down. Fears of drowning in the maelstroms of global finance abound. Feelings of powerlessness among the have-a-little-bits and have-nots fuel the hate of the even more down-trodden and the yearning for the good old welfare state. Bereft of their market populist cover, ruling elites publicly bemoan the rise of xenophobic populism on the right but are really concerned about flares of left populism that might develop into a challenge to the unbridled power of capital. 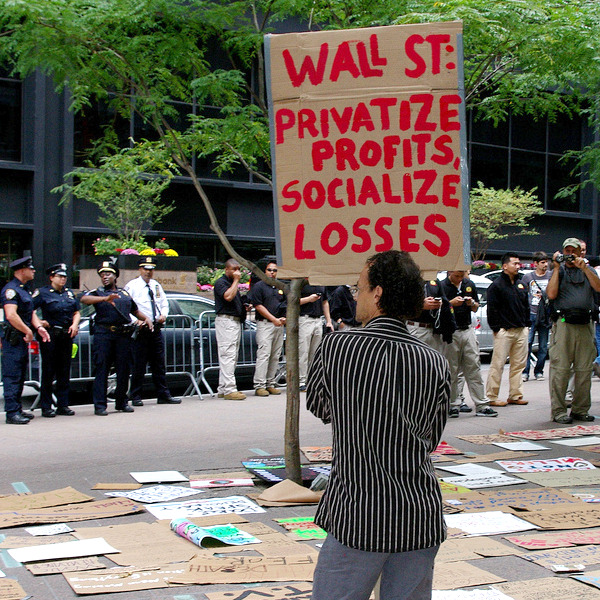 Yet, the anti-populism from above is helpless in several ways. First, it is blind to the role its own brand of populism – market populism – played in rolling back the countervailing powers of labour and other social movements. Second, it doesn’t realize that telling the people that they shall not be populist confirms the populist charge of arrogant elites who are disconnected from the anxieties and aspirations on main street. Third, professed anti-populism doesn’t correspond to a change in direction. Occasional avowals of understanding ordinary peoples’ concerns coupled with promises of change always end up in the profit-enhancing policies that did so much to produce the economic crises, social inequalities and insecurities that undermined the legitimacy of market-rule in the first place. In so many variations, the ‘market über alles’-theme remains the same.

Private Investment is Better Than Public Spending:
Three Variations on one Theme

This theme posits the superiority of private investment over public spending. Since the late 1970s, when market populism replaced widespread trust in the social engineering capacities of the Keynesian welfare state, it was presented in three different variations. First as ‘public spending is crowding out private investment’. Then as ‘selling off’ public enterprises and infrastructure gives private investors the room they need to propel economy-wide growth’. And finally, as ‘bailing out banks is the only way to prevent the entire economy from collapse’.

Admittedly, this last incarnation is very much at odds with the claim that private investments are superior to public spending. Strangely enough, bank bailouts weren’t the last breath of obviously failed market über alles-policies but the first step in another round of privatizations and public spending cuts. Since then, private investment, at least in the West, was largely confined to stock markets where new bubbles were blown up and new crises pre-programmed. Like previous crises, the bust next time will lead to a further loss of legitimacy but also more austerity. The bubble-bust-austerity cycle won’t be broken until a big new economic idea rallies the discontented and exerts enough countervailing power to roll back or even overcome capital rule.

From Crowding Out to Selling Off

Pro-market economists have always been convinced that private investments were the key to the well-being of everyone and that economic policies should focus on creating conditions conducive to such investments. This means: securing private property, removing barriers to market access, keeping regulations and taxes to a minimum. Next to a complete takeover by the state, welfare state expansion was the second worst thing pro-market economists could think of. Yet, as long as this expansion went hand-in-hand with high growth and profit rates, capitalists weren’t too concerned with market principles. Yet, when prosperity turned into stagnation, inflation accelerated, and public deficits grew, they happily used pro-market ideas to rally workers and women, ethnic minorities and student youth who felt that the welfare state didn’t deliver on its promises around an anti-welfare state program.

The upshot of this explanation of 1970s stagflation was that the best economic policy could do was to roll-back the welfare state and open new markets by selling off state-owned firms and infrastructure. While the privatization of airlines and railways, housing and hospitals, telecoms and utilities in the West created some investment opportunities, the big bang for private investors came with the collapse of communism in the East. So excited were capitalists that profit expectations soon outpaced actually existing profit opportunities. The clash between expectations and reality led to the bursting of the dot.com bubble in 2001 and, on a much larger scale, the world financial and economic crises 2008/09. Investor confidence was shaken to the bone, it was public bailout money that got investors back on their feet.

From Bailing Out to Economic Alternatives

A little bit of fiscal stimulus topped with a lot of bailout money stopped stock markets and economies from free falling, indeed. Added with cheap central bank money, this sort of crisis management also paved the way for new bubbles and crises. The socialization of private losses led to public deficits way beyond those caused by the clash of economic stagnation and expanded welfare states. Moreover, asset-price inflation that was one of the causes of the 2001 and 2008/09 crises was much higher and had more severe effects on financial stability than the price-wage spirals that pro-market economists blamed, along with allegedly excessive public spending and red tape, for the 1970s stagnation. However, capitalists learned that public deficits are useful levers to push for more privatizations and public spending cuts. Austerity raises elite boats at the expense of everybody else. The bubble-bust-austerity cycle is their business model.

Right-wing populists who complain about arrogant elites but who really invite the discontented to escape into the dream-worlds of national and racial purity won’t change the economic reality that produces ever more discontent. Left-wing populism might be successful in advancing real world alternatives if it recognizes that welfare states in the 1970s were sandwiched between popular discontent bemoaning injustices built into those welfare states, and capitalists fearing the detrimental effect of further welfare state expansion on their profits. Alternatives need to be thought out beyond the welfare state and advanced in a way that captures the imagination of today’s fearful and hopeless discontented. •