A Tale of Two Austerities

The greatly intensified austerity that has been imposed in the UK since 2010 has been looked to with considerable approval by right wing imitators. Among countries that had developed a relatively adequate ‘welfare state’, the attack on social provision in the UK has been outstandingly severe. One of the key elements of this has been a drive to degrade social benefit systems. The central objective has not been, as is generally claimed, to save money but rather to ensure a level of desperation that drives people into low wage precarious work and depresses the level of real wages.

In Canada, where a federal system of government exists, most of the political decisions related to the undermining of social programmes are taken at the provincial level. It is worthwhile to compare the specific assault on income support in Ontario, the province with the largest economy and population, with the situation that has unfolded in the UK. Before doing this, however, I want to go a little deeper into why the architects of neoliberal austerity have placed such emphasis on reducing the adequacy of systems of income support that unemployed, poor and disabled people turn to.

When the peasantry was being driven from the land in England, the Tudor authorities at first imagined that the anger of the dispossessed could be contained with large doses of state violence and intimidation. However, the jobless and homeless portion of the new working class created a public order problem that required a reluctant concession. This took the form of the Poor Laws and, as is still the case with modern income support systems, they were intended to maintain social stability while offering the least attractive alternative possible to the worst jobs on offer.

The 1834 New Poor Law articulated a principle of ‘less eligibility’ that has cast its shadow over benefit systems ever since. The terms and conditions of receiving relief, featuring the dreaded workhouse, would ensure that recipients would be worse off than the poorest workers. Modern benefit systems, with bureaucratic intrusion and moral policing replacing the workhouse, retain the guiding principle of less eligibility. The Ken Loach film, I, Daniel Blake demonstrates this very starkly.

It is often suggested that ‘austerity isn’t working’. In fact, in both the UK and Ontario, the degrading of benefit systems has produced startling results for employers, especially those paying the lowest wages. If benefit levels had not been driven down and made more punitive and precarious, it is hard to imagine how the proliferation of low wage precarious work could have been so successfully imposed.

Sluggish wage growth exists in all OECD countries but the UK’s long-term decline in real wage levels is especially stark. The numbers of people forced into precarious employment has shot up and the increase in workers forced to accept zero hour contracts has been dramatic. Changes in the level of exploitation and the expansion of the low wage sector have been comparably appalling in Ontario. In 1997, only one worker in forty was forced to accept a minimum wage job but, by 2015, that had increased to one worker in eight. By 2013, among workers in the densely populated Greater Toronto and Hamilton areas, barely half were in permanent full-time jobs.

Liberal War on the Poor

Until recently, when a hard-right Tory Government took office, the task of imposing austerity and reducing the adequacy of the social assistance system in Ontario was in the hands of a Liberal Government. As the dubiously progressive face of the neoliberal mainstream, the Liberals were somewhat circumspect in how they carried out the attack. Their task was made easier by the work of an earlier Thatcher-like Tory regime that held office from 1995 until 2003. Brutal cutbacks in the social assistance rates were an accomplished fact and the Liberals spent most of their fifteen years in office providing parsimonious increases below the rate of inflation while holding round after round of public consultations to keep alive the illusion that they would address a growing crisis of poverty and homelessness.

At the very end of the Liberal period, after so successfully reducing the adequacy of Ontario’s income support system and driving people into a mushrooming low wage sector, they concluded that the attack could be eased and they tactically shifted to the left. Under considerable pressure from a ‘Fight For $15 and Fairness Campaign’, they increased the minimum wage, announcing that it would rise to $15 in 2019, and introduced a series of measures to strengthen workers’ rights. They also announced a 3% increase in social assistance rates that, while inadequate, would be the first general increase that exceeded the rate of inflation since 1994. They also announced a series of modest but beneficial measures to improve the lives of people receiving benefits.

When the new Tory regime took office last June, there was no delay in moving towards a more ruthless and extreme form of war on the poor. The minimum wage increase was cancelled and the scheduled improvements in social assistance met the same fate. The Tories even cancelled the basic income pilot project that the Liberals were running. While many neoliberal thinkers look approvingly at the concept of basic income, the Ford Tories, as meat and potatoes reactionaries, had no interest in anything that smacked of reduced conditionality. The attitudes of former work and pensions secretary, Esther McVey, and her Ontario counterpart, Lisa MacLeod, on this social policy proposal are striking similar.

After killing off the impending reforms and cutting the 3% rate increase in half, the Ontario social services minister declared a review of the social assistance system. The results of this are predictably horrifying and chart directions that will be familiar to those in the UK who have experienced or resisted the Tory attack on social benefits under Cameron and May. MacLeod is very fond of the right wing cliche that ‘the best social programme is a job’. This is the key to the Ontario Tory approach to ‘welfare reform’. Having acted to preserve poverty wages, the plan is to refine the social assistance system as a means of forcing people into the worst jobs.

In the UK, the work capability assessment has been used to brutally and systematically deny benefits to disabled people. The Ontario Tories share the goal of ensuring that disability benefits are restricted massively so as to give disabled no option but to enter the job market. Their solution is to change radically the definition of disability. The Ontario Disability Support Program (ODSP) will now only be for those who can show that are permanently and severely impaired with no prospects of taking employment. 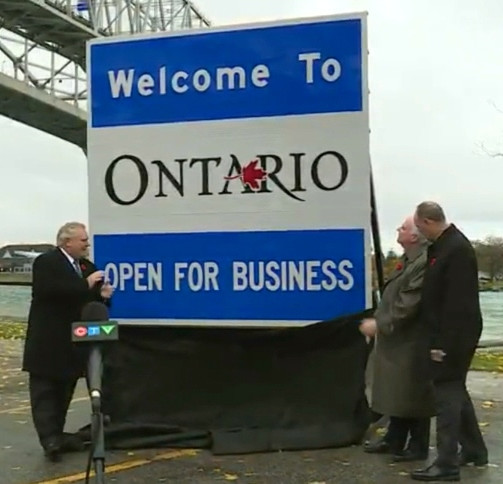 All others will be forced onto the ‘short term’ Ontario Works (OW) programme where they will be treated as job ready workers, regardless of their situation. At the same time, OW is to be reworked as a much more coercive supplier of low wage workers. Just as benefit sanctions and claimant commitments have been used to ensure people in the UK understand they must scramble for employment on the employers’ terms, the Ontario plan takes similar directions. ‘Placing a greater focus on outcomes’, people will ‘complete individual action plans’. Municipalities that function as delivery agents ‘will be held accountable for helping people achieve their goals’ (provided those goals include working for low pay with no rights and few supports). So directly is the refined system to work as a supplier for the most exploitative employers that the Tories are ‘launching a website, Ontario.ca/openforbusiness to make matching job seekers with businesses easier’. The vilest employers will know where to go for a supply of vulnerable workers who must accept employment on their terms or face loss of benefits and outright destitution.

Theresa May’s recent claim that austerity is over is exposed as a lie as communities in the UK experience the horrible effects of the roll out of Universal Credit. In Ontario, too, austerity and the degrading of benefit systems is a work in progress. What must be understood is that this attack doesn’t only impact the poorest people. It is a careful and ruthless strategy to increase the supply of super exploited workers and, in doing so, depress wages generally. The broad working-class movement has a stake in resisting this attack and defeating the austerity driven war on the poor. •