“Let a New World be born in Bandung for a genuine land reform, not land grabs!” — Bandung-Indonesia, September 24, 2018.

The world order of the 21st century has changed, as colonialism and imperialism mutate into many faces. Neoliberalism becomes the new foundation for neo-colonialism, neo-imperialism, and authoritarianism with a populist mask. These all continue the practices of colonialism and exploitation for corporate and commercial interests against the rights of the people. Land grabbing, land evictions and exclusion of local people from their sources of livelihood, and inclusion of the poor in exploitative works are a result. 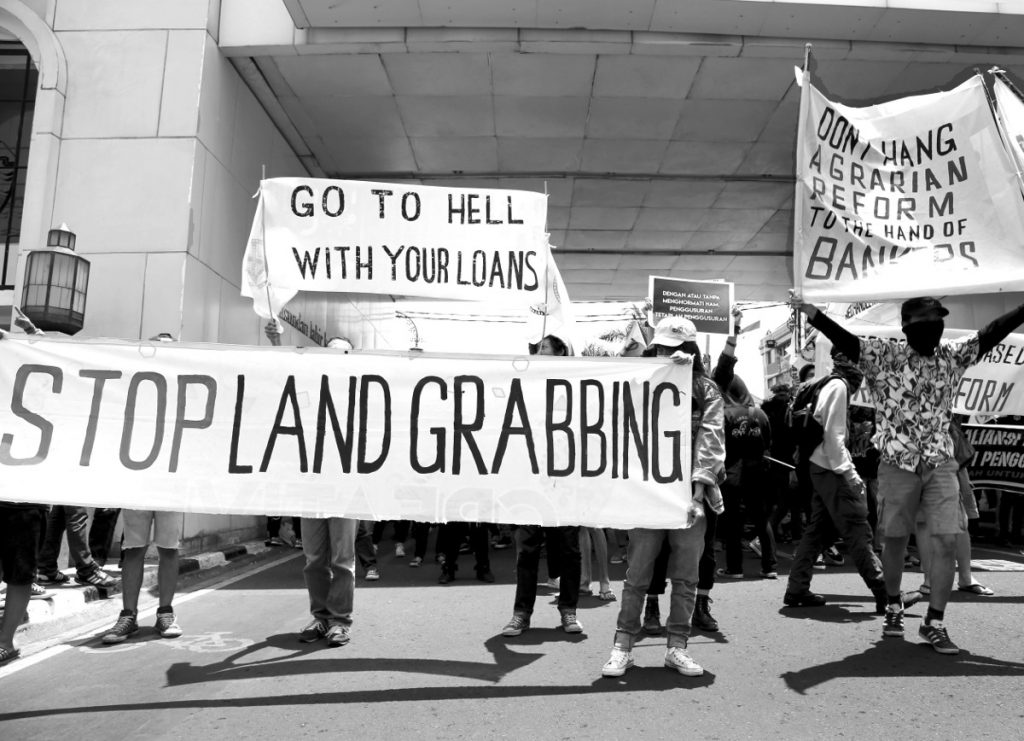 These neocolonial practices occur with the facilitation of the state and its various apparatuses, which are frequently deployed with either a mask of populism or manipulation of popular issues. Nowadays, land grabs, dispossessions, as well as forced evictions are expounded and and protected by neoliberal laws and regulations in the interests of attaining capitalist investments.

Land policies and the large-scale land control regulations at the global, national, and local level have been formulated by neoliberal agents that exist within various institutions such as the World Bank, Bank Dunia of Indonesia, the International Fund for Agricultural Development (IFAD), the International Land Coalition (ILC), national and local governments, and often non-governmental organizations. Consultative forums such as the Global Land Forum need to place the peoples’ interests first and oppose – not legitimize – the ongoing and persistent dispossession of people’s rights on land.

Agrarian reform policy should be formed to uphold social justice, restructure unequal land distribution, prevent land concentration in a handful of economic and political elites, and provide security of tenure to local people and the poor. But such reform policies often become operations to turn on the land market. Land registration and certification may be wrapped in the beautiful words of seeking “to formalize and guarantee the security of land control and ownership.” But they often are used to facilitate land transfers that come under control of the powerful market players and capitalists as part of a land grab.

The People’s Alliance Against Eviction (Aliansi Rakyat Anti Penggusuran, ARAP), togther with other global citizens taking up the spirit of anti-colonialism and anti-imperialism as written in the 1955 Declaration of Asia-Africa Conference, affirms the following principles as a struggle based against land grabs, evictions, and the neoliberal global land policies.

The Bandung Declaration of the Social Movements emerges out of the Global Land Forum in Bandung, Indonesia in 2018, and the People’s Alliance Against Eviction (Aliansi Rakyat Anti Penggusuran, ARAP). •

Frans Ari Prasetyo is an independent researcher and photographer living in Bandung, Indonesia. He works on urban politics with various grassroots communities, underground collectives and the urban marginalized. He can be reached at fransariprasetyo@gmail.com.