This article examines the bases of popular support for recently re-elected Russian president Vladimir Putin. Although this support is strenuously “cultivated” by the regime by various illicit means, it nevertheless has a genuine basis that needs to be understood by people on the left who are trying to develop an enlightened position in the escalating confrontation between the “West” and Russia. 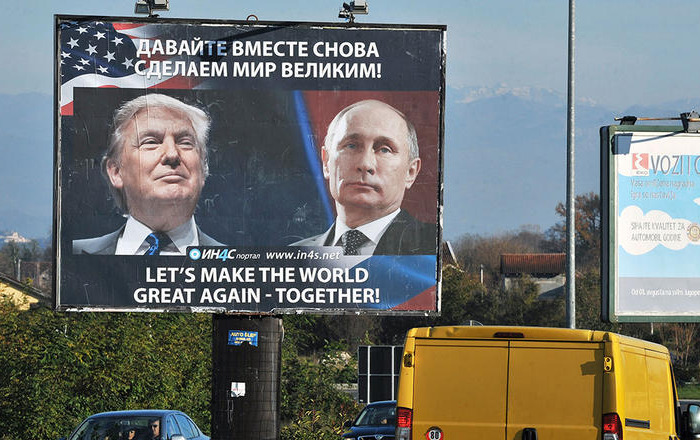 Putin’s speeches during his brief electoral campaign did not point to any major changes in domestic and foreign policies. In the international realm, one can expect the continued degradation of relations with the “West,” for which the West is largely responsible. One can also suppose that there will be a significant effort made to prepare Putin’s succession after 24 years in power (starting in 1998 as Security Director to the end of his current presidency in 2022). However, his leaving power is not certain in a system where personal relations of corruption play an important role.

Some spokespersons for the regime have themselves described it as a “managed democracy.” This is a regime that is somewhere between a classic dictatorship (one that tolerates no organized and public opposition) and a capitalist democracy that does tolerate political liberties (but in which the interests of the dominant class are guaranteed by means other than brutal repression). “Managed democracy” tolerates political freedoms, but only to the degree they do not present a serious threat to the continuity in power of the political élite.

This said, support for Putin among the people of Russia cannot be explained entirely by the state’s repressive measures or by its abuse of the so-called “administrative resources.” The latter include, among others, its control of the major television networks, severe restrictions on public demonstrations, various illicit pressures exerted on public sector employees, and, when necessary, falsification of electoral results.

Putin’s popularity is clearly cultivated by the regime. But it also finds a real basis in the population, even if that basis is not easily separated from the regime’s efforts to cultivate it.

The first element of that popularity is the profound contrast, especially economic, between the Putin and Yeltsin periods. Even if the younger generation has no direct personal memory of the Yeltsin era, it still looms large in the popular consciousness. The 1990s were a period of very deep and prolonged economic depression, hyperinflation, dramatic impoverishment of the people, mass unemployment, deferred payment of wages and pensions (sometimes many months – with no indexation), massive theft of national wealth, and domination by the mafia of entire sections of the economy.

Even if it is not principally thanks to Putin’s effort but to the rapid increase in the price of oil starting at the end of the 1990s, these processes ended and were largely reversed under Putin. While popular living standards have stagnated, even declined somewhat in the last few years, they saw a rapid rise in the 2000s, and the stark contrast of the present with the 1990s is still very much alive in popular memory. To cite one demographic indicator of popular well-being, life expectancy in 2000 was 65 years (as against 79 in Canada). Today it is 72.

The Mafia, The Oligarchs and The State

As for the suppression of democracy, which is usually attributed wrongly in the West to Putin, it, in fact, already occurred under Yeltsin. Putin at least removed mafia control of the economy and restored the state’s monopoly of violence. And he domesticated the oligarchs, without, however, touching their illicit fortunes, except in the few cases where they persisted in interfering in political affairs. Putin also arrested and reversed the centrifugal tendencies that threatened the integrity of the state, even if he used terroristic methods to achieve that in the case of irredentist Chechnya.

The second factor in Putin’s popularity is his affirmation of Russia’s sovereignty in the face of the West’s actions, which are largely perceived by Russians as aggressive and antagonistic. This popular perception has, in my opinion, a significant basis in reality.

It is no exaggeration to say that the Russia of the 1990s was under the colonial administration of the G-7, in particular of the USA. Shock therapy, concocted by the IMF and World Bank at the request of the G-7, in the course of a few years transformed an industrial giant into a country dependent on the export of natural resources. Adoption of that policy was the condition of G-7 support, which was precious for Yeltsin. The G-7 also encouraged and then approved the violent suppression of democracy by Yeltsin in the fall of 1993 and validated his theft of the 1996 presidential election.

To this one must add the illegal bombardment by NATO in 1999 of Serbia, traditional ally of Russia, the abrogation of the ABM treaty by the U.S. in 2002, the continued expansion of NATO, and, finally, the role played by the West in the armed overthrow of the regime in the Ukraine and in the civil war that followed.

It is true that the Putin regime has put a lot of effort into cultivating patriotic sentiment. He even had the election date postponed to coincide with the anniversary of the annexation of Crimea, a very popular act. But the regime finds fertile ideological terrain for these efforts in the population – of all political colours, except the most neoliberal. To understand that, one has only to have a passing knowledge of Russian history and to recognize the aggressive nature of NATO policy, particularly of the U.S., in defence of its domination of a unipolar world.

The third factor in Putin’s popularity is the outcome of the so-called “revolution of dignity” of February 2014 in Ukraine – the overthrow of a corrupt, but legally elected government by a movement that was popular in its origins but was soon joined by armed neo-fascist forces and NATO emissaries. While it is true that Russian media, controlled by the government, propagate an image of chaos and disaster in Ukraine, it is the case that they really do not have to exaggerate that reality.

However one looks at it – except from the point of view of the ultranationalists and the oligarchs – the situation of the popular classes in Ukraine has radically deteriorated. And that makes the situation in Russia look so much better. This contrast weighs heavily on the political choice even of people who hate the Putin regime. While it is true that this is aided by the regime’s efforts to prevent the emergence of a credible alternative to Putin, the Ukrainian situation is of great help.

A few words about Russia’s young people. Recent reports cite surveys that show that the youth support Putin even more than the rest of the population. That is perhaps the case – the mass of young people appears even more apolitical than their elders. But 2017 saw some very big protest demonstrations, mainly of people 16-24 years of age. These demonstrations were called – but not organized – by Alexei Navalny, known as an anti-corruption campaigner. These young people came out despite the very real threat of arrest, of which there were hundreds. Having witnessed one of these myself, I can say that what mobilized these young people was less their anger at corruption in high levels than their protest against the arbitrary limits on their freedom. This beginning of an awakening among Russia’s young people perhaps augurs change in that country’s hitherto rather stagnant political scene. •