Communiqué on the Situation in Catalonia

Following the Catalan Parliament’s declaration of independence on October 27, Podemos leader Pablo Iglesias tweeted: “We are against repression and for a negotiated referendum [which the Madrid government refused to Catalonia] but the declaration of independence is illegitimate and favours the strategy of the PP [People’s Party, headed by Spanish premier Mariano Rajoy].”

1. On 27 October, in fulfilment of the mandate of the referendum of 1 October in which despite police repression more than two million people participated, the Catalan Parliament proclaimed the Catalan Republic. In a Spain with a monarchy that is a direct successor of the dictator Franco, a Republic that opens up a constituent process is without doubt a proposal that breaks with the 1978 regime, with its political consensus and with a constitutional order that serves the elites. This proclamation occurs in a context of constant threats to apply article 155 and impose an authoritarian outcome on a conflict that demands an eminently political and democratic solution. In fact, in recent days the application of 155 had come to be threatened no matter what happened. We call for the application of article 155 to be rejected and for democratic, peaceful and disobedient defence of the will of the Catalan people and of their right to decide. 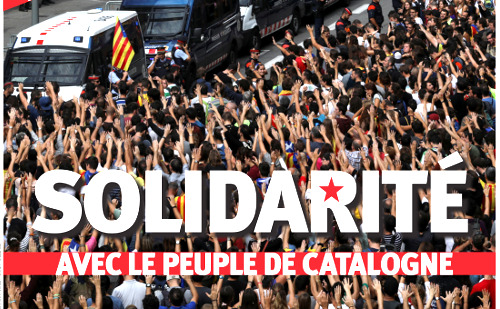 2. In these times of exacerbation of patriotic passions it is important to correctly define those responsible for events. The People’s Party, spurred on by Citizens and with the support of the PSOE and under pressure from the state apparatus, had decided to apply article 155 of the Constitution. The goal of this measure was to prevent a dialogue between Catalunya and the rest of the State, criminalising the Catalan people, refusing to entertain the solution of a negotiated referendum and justifying the use of force to solve a political problem. An irresponsible operation, which seeks to reorganise the unity of the State along authoritarian lines.

3. We are aware that many unknowns and uncertainties now opening up. To dope the people with easy slogans is typical of a conception of politics that shies away from democratic debate and considers itself lead actor in a story that is actually the work of ordinary people. The new Catalan Republic faces internal challenges that cannot be ignored in a country where a significant section of the population does not feel represented by the pro-independence movement. The first challenge for the process is to work to overcome this division, integrating the popular sectors not supportive of independence into a project for the country, avoiding the social confrontation that only benefits the forces of reaction while at the same time organising a movement capable of resisting the repression of the State. The constituent process must be a instrument operating in that direction, integrating the demands of the popular classes that go beyond the national question, putting social issues in the centre and radically democratising Catalonia.

4. In the Spanish State, we are living through a complex wave of reaction. Many people, including people on the left, feel hurt and torn by events in Catalonia. While it is true that a good part of this feeling is channeled into a Catalanaphobic reaction, heir of the worst sentiments of the Franco regime, and also into the violent expressions of the extreme right on the street, a large section of the population is honestly concerned about what is happening in Catalonia and puts its trust in dialogue and negotiation, in a return to politics.

From our point of view, what is fundamentally at stake is the possibility of people deciding their future. If the Catalan people suffers defeat and is crushed by the PP and its accomplices, when a territory, a town council, a community or a social sector decide to commit itself to a position on any issue it will be crushed with the same logic with which today the PP and the state are seeking to crush Catalonia. This is the central issue, which goes beyond the national question and puts the issue of popular sovereignty front and centre: it is the people who have the right to decide – such is the basis of democracy – and the law must be at the service of democracy and not vice versa.

On the other hand, there are other solutions and forms of relationship between peoples that go beyond those traditionally imposed in the Spanish State. The strategy of opening constituent processes has as its central idea developing a project for society that is carried out by the working and popular classes, by women, by migrants, by all the people who do not have political and economic power but who are indispensable. But it can also be a method to solve the historical problems of the Spanish State on the national level: a way of re-articulating relations between the peoples on the basis of equality, where the goal – out of respect for the right to decide and its outcomes – is to build bridges that the current top-down and authoritarian relationship of the central state destroys, developing from below forms of cooperation and dialogue among the people in order to build an alternative society to that of political and economic elites. An opportunity to build a new framework of fraternal coexistence that allows us to aspire not only to recover but also to conquer new social and democratic rights for the popular classes.

5. We know that ours is a difficult position in a context like this. That is why it seems to us fundamental to debate, to maintain dialogue among different democratic positions, but also to oppose the authoritarian regression that the State plans with the excuse of the Catalan question (it could have been any other excuse). Defending the Catalan people who will suffer the brutal application of article 155 not only means defending pro-independence forces, but also standing with that 80% of the Catalan population that has been demanding a referendum and a democratic solution to its demands and the other 20% that is going to lose its self-government. This is the time to defend the possibility of a democratic solution to the diktats of the State. It is time to (re)start the patient construction of a project that goes beyond the 1978 regime and is capable of building fraternal relations between the different peoples of the Spanish State. The elites have proven incapable of solving the problems of the Spanish State; today more than ever, it is urgent to recover the leading role of politics for those below. •

Text translated by Dick Nichols, published on his live blog from Barcelona.