Against NAFTA: Resolution to Support Workers in Canada, Mexico and the USA

The following resolution calling for the repeal of the North American Free Trade Agreement (NAFTA) is the work of the Autoworkers Caravan. It is an organizing, educating and mobilizing group of current and former autoworkers, largely located in the USA, but with some Canadian Unifor members as well. The group is somewhat of a successor to the once active oppositional movement within the U.S.-centred ‘International’, the United Auto Workers (UAW) – the now defunct New Directions movement. The Autoworkers Caravan, formed in 2008 and based in the Detroit area, continues to challenge the leadership of the UAW, and works to democratize and energize union locals across the USA. Caravan activity has included opposing concessions, unequal tiering of workplaces and lack of union democracy. It champions international solidarity and support of autoworkers across the NAFTA zone – as is clear from the resolution below.

The resolution, in the words of one of the Caravan activists, Scott Houldieson, “will be broadcast to as many local and international unions as possible. One of the goals will be to rally opposition to another corporate trade deal that sacrifices our environment and our standard of living. The NAFTA renegotiations are set to begin on August 16, 2017. We would like to see simultaneous rallies across North America on that date in opposition to NAFTA. Let’s rally opposition to NAFTA on August 16th and at regular intervals afterwards.”

Whereas, President Trump made a campaign promise to scrap NAFTA, and Whereas, there is an attack on immigrant workers documented and undocumented in the United States and NAFTA has been used to pit U.S. workers against Mexican workers to benefit multi-national Corporations from the U.S. and around the world, and 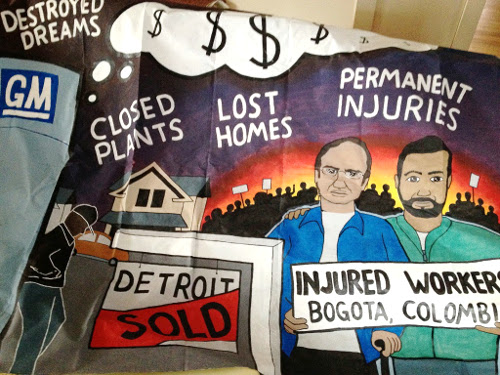 Whereas, the escalating attack on immigrant workers and people of color is a threat to all workers and organized labor in the United States, the immigrant community and
their children in schools are being terrorized by ICE and the racist attacks on immigrants, and

Whereas, NAFTA has been used to privatize railroads, telecom, oil, education and the dismantling of Mexico’s agricultural industry causing forced migration of 18 million people from their homelands in Mexico. The U.S. and other multi-national Corporations have colluded with the Mexican government using NAFTA to prevent unionization at the 1500 maquiladora factories in Mexico, and

Whereas, the privatization of land has forced hundreds of thousands of indigenous people off their indigenous homeland as many as 80,000 farmworkers and their families forced to move outside their communities, towns, cities, and Northern states to find work often under horrible inhumane working conditions that are designed to enslave people/workers, like the Driscoll’s corporation in Baja, Mexico and other subsidiary farms, and

Whereas, the Trump administration is increasing the militarization of the border of the United States and Mexico that is dividing families and children from their parents, relatives, and grandparents who have not been in reachable contact in many cases over 20 years, and

Whereas, the Trump administration has said that the Mexican people are responsible for the failure of NAFTA, and the U.S. will renegotiate NAFTA allowing U.S. multi-nationals and businesses to expand, exploit, and renegotiate this agreement without the input of unions, human rights environmental organization groups, and health and welfare coalitions
to improve the agreement, rather the Trump administration will use this opportunity to further attack workers in Mexico, USA, and Canada, and

Whereas, the same companies and multi-nationals that pushed NAFTA will be in charge of renegotiating NAFTA to benefit these same corporations and to further the expansion of the “Guest Workers” programs, and to further privatization and deregulation without the input of unions, and workers, and

Whereas, labor should support the unification of workers in Mexico, USA, and Canada against the same multi-nationals and union busters that are weakening workers in the world, and the U.S. labor force should call for the cancellation of NAFTA and for the nationalization of property and lands expropriated from the people of Mexico, and

Whereas, the Sacramento, California Central Labor Council has endorsed this resolution,

Therefore Be It Resolved, the U.S. unions need to support full unionization of workers in Mexico and Canada by building direct worker-solidarity, by enforcing international strike-actions in USA, Mexico, and Canada as all three countries are under attack, by the same multi-nationals, and

Be it Further Resolved, we oppose NAFTA being “reformed” to benefit global multi-nationals thieving off the poorest labor force in particular Mexico, USA, and Canada no longer, and

Be It Further Resolved, the Autoworker Caravan calls for united solidarity action of workers in Mexico, United States, and Canada for the cancellation of NAFTA, and calls for an end to the massive ICE attacks on immigrant workers documented and undocumented in the U.S., and

The Autoworker Caravan was formed in December 2008 as a rank and file voice to defend the interests of autoworkers in the face of wholesale attacks against UAW members in the midst of the financial meltdown and subsequent bankruptcies of two of the "Big 3."