$15 and Fairness Shakes Up Ontario

The Fight for $15 and Fairness scored a big victory on May 30 when the Ontario Liberals announced they would raise the minimum wage to $15 by January 1, 2019. The Liberals also announced a slew of other legislative changes they will introduce as part of the Fair Workplaces, Better Jobs Act, such as two paid personal emergency leave days (as part of the 10 PEL days workers are already entitled too), equal pay for equal work for part-time workers, requiring employees to be paid for three hours of work if their shift is cancelled within 48 hours, an additional week of paid vacation for employees who have been with a business for at least five years. 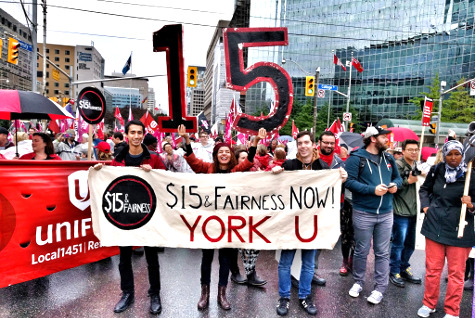 The reforms in the Liberal’s Fair Workplaces, Better Jobs Act, which was introduced on June 1, are a positive step forward for workers. But they remain only a step in the right direction. The reforms themselves fall short of what both labour and community groups are asking for. The absence of paid sick days, the lack of legislation around agricultural workers’ rights, a proposed 48 hour schedule penalty instead of a full-week’s notice, only a narrow sector specific card check certification and the continued student and liquor service exemption from the minimum wage are significant shortcomings. Going forward there must be a fight for even stronger enforcement of the ESA, better protections for workers and making it easier for all workers to join a union.

We should remain vigilante when it comes to reading the fine print and looking at the timelines. There is a good chance much of what the Liberals promise could be watered down in committee or have lengthy timelines in their implementation. For instance the Liberal plan for card check certification in the temporary help agencies, building services, home care and community services sectors won’t be rolled out until a mere 10 weeks before the election. Other reforms to the ESA and OLRA would not occur until after the 2018 election.

Labour must also watch for ways in which positive parts of the legislation, like the equal pay for part-time and full-time workers provision, could be used by employers to level down wages and standards instead of raising them up. Unions in low-wage sectors will also need to address the issue of the ESA reforms leap-frogging parts of their contract. For workers and unions, these can be characterized as good problems.

Organizing Gets the Goods

The proposed changes come after a sustained two-year effort by the Fight for $15 and Fairness campaign, to push for positive reforms to the ESA and OLRA during the Liberal initiated Changing Workplaces Review (CWR).

The Fight for $15 and Fairness campaign, which grew out of the campaign to raise the minimum wage in 2013, saw early on the only way in which it was going to win positive reforms was by involving as many workers as possible in the struggle. Where employers had money, lobbyists and access to the media, low-wage workers had numbers and community. To this end the campaign forged a united front between unions, non-union workers, student groups, healthcare advocates, faith groups and community organizations that spoke to the concerns of the broader working class.

The outlook of the campaign was to treat the CWR as a chance for non-unionized workers to engage in a form of collective bargaining. Without access to a collective agreement the ESA for non-union workers was all that workers had and the campaign offered an avenue to leverage their political power to in effect bargain with the state.

The campaign, initially relatively small and perpetually under-resourced, aimed to draw in as many workers as possible across the province into the fight. It was not an insular or top-down campaign, but predicated on building leadership in all corners and at all levels. Active chapters existed in Windsor, Sudbury, North Bay, Guelph, Kingston, Niagara, London, Hamilton, Ottawa, Waterloo, Toronto and Oshawa, just to name a few places. These community chapters focused on doing public outreach via petitioning and fun creative actions. They engaged in lobbying, educationals and protests. The campaign also developed an active university and college network with campaigns on well over a dozen campuses.

The campaign also sunk roots into workplace struggles by linking up with bargaining campaigns and the OFL’s side of the campaign, Make It Fair. Grocery store workers, librarians, airport workers and food service workers utilized the $15 and Fairness demands in their fights with employers. Food service workers with Unite Here Local 75 at York and University of Toronto achieved major strike victories by not only using the $15 and Fairness demands, but by working hand in glove with the campaign to build public sympathy for the workers by framing the strikes as a fight for all low-waged workers.

It should be remembered that the Liberals declared that the minimum wage was out of scope of the CWR and repeatedly stated there would be no increase. Some labour leaders were not supportive of the $15 minimum wage demand, stating it was unwinnable and not part of the CWR. The Fight for $15 and Fairness campaign shows that a well organized, disciplined, and strategic campaign that speaks to and activates the broader working class can defy the odds and achieve significant victories via legislation and at the bargaining table.

NDP and $15 and Fairness

The Ontario New Democratic Party (ONDP) last April, a year after the launch of the $15 and Fairness campaign, came out in support of a $15 minimum wage. The NDP also came out in support of the card-check union certification for all industries and other progressive OLRA reforms. The party has even supported the idea of paid sick days. This is a welcome advance for the party, which in the last provincial election supported a $12 minimum wage when the campaign was pushing for $14.

But the ONDP has been relatively passive on the issues. They finally came out for paid sick days this spring, but wouldn’t outline how many or their plan for implementation. Instead of putting forth private members bills with a strong $15 and Fairness frame and making the Liberals consistently vote down these measures they preferred to put forward private members bills that only had a realistic chance of passing. By not setting the agenda the ONDP’s strategy of leading from the rear gave the Liberals all sorts of wiggle room on the issues.

While some riding associations were active and productive participants in the campaign, the leadership lacks vision when it comes to conducting a broader fight. Since the announcement by Premier Kathleen Wynne, the ONDP has let the Liberals be the sole political voice defending the $15 minimum wage against rightwing attacks. Instead of supporting the Liberals finally doing the correct thing and attacking the rightwing detractors, they have remained silent and let Wynne be identified as the idea’s political champion. It is easy to be outflanked when you are not moving.

The campaign has shifted the political terrain in the province by making seemingly far-fetched ideas extremely popular. It is easy to now say that a $15 minimum wage, equal work for equal pay and other labour law reforms are only modest gains, as some on the left are now doing. However, this diminishes the work done by countless people who struggled on the campaign and downplays the political lesson that workers engaging in economic and political struggle can achieve victories.

When the campaign started it was building off the incredible work of the Fight for $15 in the United States and the campaign to raise the minimum wage in Ontario. Workers who launched the Fight for $15 and Fairness picked $15 and other goals because they seemed bold enough to inspire people to action, achievable enough to produce victories and universal enough to connect with movements across the globe. When the campaign started a common refrain many people heard while out petitioning was these sound like good ideas, but we will never achieve them. This reaction was the product of years of defeats weathered by the working class. After constantly organizing and fighting for two years the campaign has put these demands on the political map and made them popular. The latest Forum Research poll shows 70% of Torontonians favouring a $15 minimum wage. Across the country, with the existence of campaigns in almost every province, the latest poll showed 63% of Canadians in support of a $15 minimum wage.

The Liberals, facing terrible polling numbers due to rising hydro prices, corruption, years of austerity and the exhaustion of being the governing party since 2003, are undoubtedly looking to make political moves in the run-up to the election. They are looking to tact left and eat into the NDP’s base, which is obviously crass electioneering. But this move to the left on labour issues is only possible because of the work the campaign did in making those ideas popular.

The Liberal announcement for a $15 minimum wage and labour law reform has set off a tectonic shift in Ontario’s political landscape. In a year from now Ontario will have its next election and instead of it being an election solely about Liberal corruption, Hydro prices and sex-ed, it looks like it will be an election about work, workers’ rights and inequality. This in and of itself is a major victory for the campaign and for workers. Making the ballot question a referendum on the needs and rights of workers is a political playing field labour and the left should welcome. Having two of the three major political parties lining up behind a $15 minimum wage and voicing at least modest support for progressive labour reforms is a victory and provides a solid political ground for labour to sink a resurgent provincial Tory party.

Fighting the Right and Raising Expectations

Over the next year the rightwing will exert massive pressure to delay, deny and reverse any and all progressive reforms. The Ontario Chamber of Commerce, the Canadian Federation of Independent Business, Ontario Proud and other rightwing groups will flood the media with fear. They will claim rising inflation, job loss, automation and a growing debt will be the result of a $15 minimum wage and modest labour reforms. If the Fight for $15 and Fairness and labour go dormant in the lead up to the election there is a good chance the Liberals will reverse course and the rightwing will triumph in the election against both the NDP and Liberals.

What is important to understand is that in making the next election about the workers’ needs and rights, the left and labour have a responsibility to escalate the fight. Workers’ expectations are being raised and this is a positive thing. The lessons of this fight must be generalized. Labour can make major advances when it aims to fight to improve standards for both union and non-union workers. Raising the floor of working standards makes it easier for unions to set the bar higher. The lessons of this struggle and the newly activated networks of workers created by the campaign are assets the union movement can draw on as it aims to achieve breakthroughs in bargaining.

Workers in Ontario are now realizing that they can fight and win significant changes in the workplace. The union movement should double down on this victory by putting its resources into organizing, effective contract campaigns and properly funding campaigns that speak to the broader working class. Passively sitting back and waiting for the election would be a fatal mistake. The confidence of the working class stemming from this victory will either propel the fight further or it will dissipate, the choice is up to labour and the left. If it is the latter there is little doubt we will be facing down Tory leader Patrick Brown, if it is the former, the sky is the limit. •