Hundreds of Palestinian political prisoners are now approaching their critical sixth week on hunger strike, and they have made an urgent appeal for international solidarity. As they hit Day 40 of their courageous Dignity Strike on May 26, the Palestinian BDS National Committee (BNC) calls for intensifying global Boycott, Divestment and Sanctions (BDS) campaigns to amplify the prisoners’ legitimate and just demands. 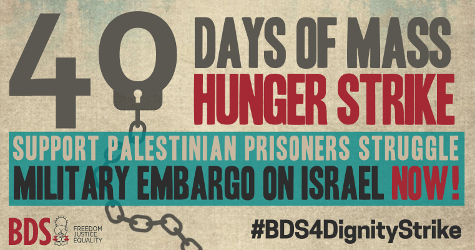 In particular, the BNC calls for immediate international action toward implementing a comprehensive military embargo on Israel, similar to that imposed against apartheid South Africa in the past. International bodies – including banks, private military corporations, research centers, universities and governments – must stop enabling Israel’s military and security apparatus, and stop facilitating the development of Israeli military technology. As long as military ties continue, the international community is effectively sending Israel a clear message of approval to continue its severe violations of international law, including its violations of basic prisoners’ rights.

This is a critical moment – with every passing hour, Palestinian hunger strikers are risking death. Their health is rapidly deteriorating as they maintain their commitment to assert their dignity and win their internationally recognized rights. A comprehensive military embargo on Israel is long overdue and as urgent as ever.

Palestinians have come together in remarkably strong support of the Dignity Strike. There have been two general strikes with mass participation across historic Palestine. The general strike on Monday, May 22 was the largest since the first Intifada (1987-1993). Rallies and creative actions are happening on a daily basis in Palestinian refugee camps across the region. Those living under Israeli military occupation are also demonstrating in the streets, shutting down Jewish-only settlers’ roads, bringing work and traffic to a standstill and refusing the entry of Israeli products into supermarkets. Across solidarity tents the slogan “boycott your jailer” rings loud.

International action is needed to support and sustain these inspiring grassroots mobilizations as Israel has responded with its predictable use of brutal military force and repression. At least one demonstrator, 23-year old Saba Abu Ubeid, has been killed by an Israeli sniper. A second young man at a solidarity march was shot in the head by an Israeli settler.

The Palestinian BDS National Committee (BNC) again and again reaffirms its full support for the Dignity Strike. We call on people of conscience and citizen groups to take urgent action, mainstreaming and escalating military embargo campaigns as an effective nonviolent means of holding Israel accountable to international law and ending its fatal impunity. •

An Injury to One is an Injury to All:
Workers Support Palestinian Prisoners on Hunger Strike

“We urge all labor organizations and workers’ movements to express their solidarity and support for the Palestinian prisoners’ hunger strike, for the Palestinian people’s struggle for liberation and for the campaign for boycott, divestment and sanctions against Israel.” — Palestinian Trade Union Coalition for BDS (PTUC-BDS), April 28, 2017. 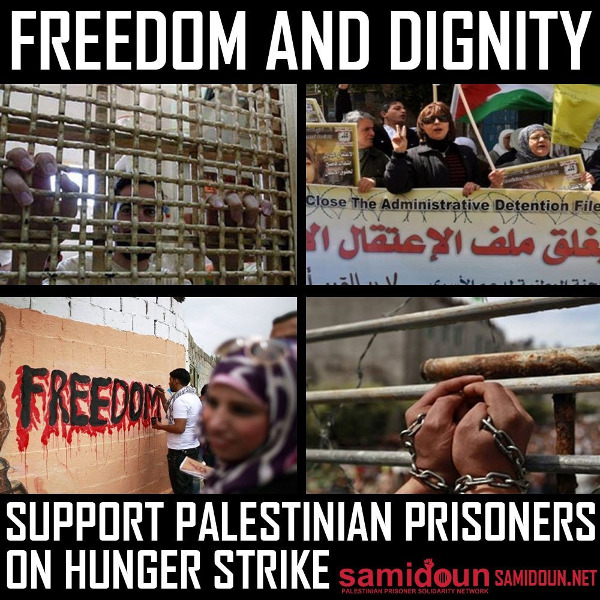 Labor for Palestine joins workers around the world to stand with 1,500 Palestinian prisoners who have been on hunger strike since April 17 to protest conditions that Amnesty International calls “unlawful and cruel.” After more than a month, their health is failing, but their steadfastness remains unshakable.

From workers’ rights and women’s rights, to anti-racism and anti-colonialism, hunger strikes are a time-honored form of protest against injustice.

But the Israeli government – which receives $3.8-billion per year in U.S. weapons and closely coordinates with the same police agencies that systematically terrorize Black and Brown communities in the United States – threatens to force-feed the strikers, and is gunning down their supporters in the streets of Palestine. Such relentless state violence reflects the continuing Nakba, Israel’s 69-year-old ethnic cleansing campaign against the Palestinian people.

Undeterred, the prisoners have vowed: “Our chains will be broken before we are, because it is human nature to heed the call for freedom regardless of the cost.”

They know that, like Jim Crow and apartheid South Africa, Zionist settler colonialism will one day fall to the unstoppable tide of popular mass resistance.

Their outpouring is accompanied by rising international labor respect of the Boycott, Divestment and Sanctions (BDS) picket line, which demands an end to occupation and apartheid, full equality for all, and Palestinian refugees’ right to return to the homes and lands from which they were expelled.

This parallels growing intersectional solidarity with Palestine from the Movement for Black Lives, Standing Rock, #NoBanNoWall, and other U.S. grassroots social justice movements.

Today, we affirm:
* Victory to Palestinian Political Hunger Strikers!
* From the River to the Sea, Palestine Will Be Free! •