A new word has arisen in the European political debate: Geringonça. This new Portuguese political term geringonça (contraption), refers to the current minority government of the Socialist Party (center-left) supported in the parliament by radical left parties. The name Geringonça was coined by its conservative critics but became popular and is also used by supporters. 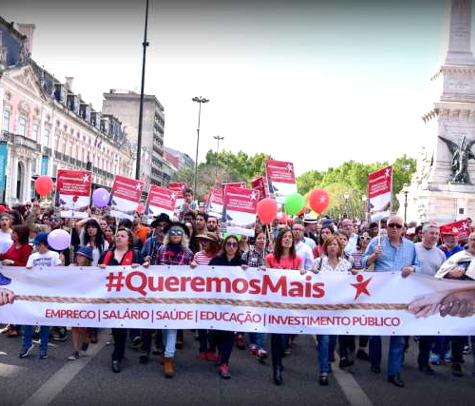 Between 2012 and 2013, Portugal had massive popular demonstrations, the biggest since the revolutionary period of 1974/75. Half a million people in the streets in a country of 10 million inhabitants is quite a lot. The target of these demonstrations was the austerity policy of the Social Democratic Party (PSD)/People’s Party (CDS) right-wing government and the European Commission (EC), the European Central Bank (ECB) and the International Monetary Fund (IMF), commonly refered as the Troika. However, that popular wave hit an institutional barrier. Not even the political crisis of summer 2013, when the minor partner (CDS) of the right-wing coalition menaced to leave, could break down the government. Cavaco Silva – the President of the Republic at the time – had managed to sponsor a deal between the parties of the right-wing government (PSD/CDS) and the biggest opposition party (Socialist Party, center-left) in order to ensure the government of Passos Coelho to proceed until 2015.

The popular protests alongside with the trade unions were therefore defeated with that institutional solidity which prevented the PSD/CDS government from falling. This was followed by a harsh social peace living together with impoverishment and degradation of public services. At the same time we witnessed floods of emigration comparable to the times of the national liberation wars of the peoples that were under the Portuguese colonial power (1961-75).

The Government of the Socialist Party (since 2015)

October 2015 was the time for the desire of protest and change to express in the election. Almost a million votes were relied on the leftmost forces: Bloco de Esquerda (Left Bloc) with 10.19%, and the electoral alliance between the Communist Party and The Greens (PCP-PEV) with 8.25%. However, despite the hard austerity years, the Socialist party (32.31%) was not able to win more votes than the right-wing coalition PSD/CDS (36.86%). Preventing the rightist parties to keep on ruling and to stopping the austerity policies were the main motivations to sign an agreement to establish a parliamentary majority of support to a Socialist Party minority government, under the leadership of António Costa.

Among the different recovery measures of workers’ and pensioners’ income, the plan of a phased increase of the national minimum wage until the end of the legislative term in 2019 will translate into a real change in the lives of more than 650,000 workers. The aim is to reach the €600 mark, promised for a long time. The Portuguese minimum wage had been frozen between 2011 and 2014 to €485 and reached €505 in the last year of the right-wing government. The Socialist Party government supported by the parties on its left increased the minimum wage to €530, in 2016, and to €557, in 2017. That was one of the demands of the parliamentary majority agreement. Even though timidly, the pressure to raise the remaining salaries is going on, contributing to revise the devaluation in the wages that occurred in the preceding years.

The tax relief on consumption, the withdrawal of the surcharge on public administration and the small increase on pensions have also helped to create a positive atmosphere for the Portuguese economy. The unemployment rate decreased to 11.1%, the lowest in the last five years (the highest rate was 16.2% in 2013). The budget deficit in 2016, slightly above 2% of the GDP will be the lowest in the last 40 years. This undermines the dogma based on the principle that austerity policies are the ones that ensure a low budget deficit.

The Limits of the Economic Program

Another dogma is refuted with the deficit decline achieved by the Socialist Party government. A low budget deficit does not ensure low interest rates. The public debt interest has been continuing its rise due to the ECB perspective of reduction of even cessation of guarantees over public debt securities.

In fact, the ‘3% debt norm’ has the purpose to submit the economy to arbitrary rules that have no real impact or meaning concerning the expected positive economic effects for the Portuguese society, particularly for those who work. The so-called European Fiscal Compact and the Stability and Growth Pact often infringed by Germany and France are not but a corset to public investment and an excuse to reforms that inescapably lead to job insecurity and ruin property and public services.

At the same time, the Socialist Party government foresees a primary balance of the public administration of about €5-billion in 2017; in other words, from the normal performance of the public administration with the foreseen revenues/expenses, €5-billion are still ‘left’ and could be used to strengthen Health or Education, for instance. However, that accounting result is reversed when you have more than €8-billion of public debt interest to be paid every year.

How to go Beyond the Portuguese ‘Contraption’?

Despite these limitations, some relief is what people are actually feeling. Austerity measures were stopped as well as the privatizing fury of the previous government. And the tiny social and economic results seem to ensure the minimums for the continuity of the parliamentary majority in support of the Socialist Party government.

It is quite ironic for the history of the Portuguese democracy that a parliamentary agreement between the Socialist and the leftist parties has occurred just when the Socialist Party presented its most liberal program ever for the 2015 election. Even more ironic is the fact that, according to the opinion polls released over the past few months, the Socialists are benefiting from the ‘left turn’ they have been forced to, due to the growth of Bloco de Esquerda and PCP-PEV alliance in 2015.

Prime Minister António Costa’s squaring the circle – obeying Brussels/Berlin alongside with the agreements signed with the left forces – may eventually fit and succeed within a legislature term until 2019. However, in the framework of the European rules, the margin is smaller to recover work income and perform social policies. The bank recapitalization requirements may push it even harder. At the same time, it is worth remembering that Vieira da Silva, the current Minister of Labour, carries the burden of precarity and austerity packages. Vieira da Silva had already been Minister of Labour (2005-2009) and Economy (2009-2011) during the governments of the Socialist Party headed by José Sócrates. So, it’s not likely and no one believes that the author of the current Labour Code is going to disrupt the job insecurity and attack to collective agreements mark he left himself during the Socialist Party government (2009-2011) that opened the way to austerity policies.

One cannot yet see a way for a real friendly policy for those who work and where Portuguese democracy is reinforced. To state such policies demands disobeying the existing Europe. It is not about remaining in the EU or the euro or leaving it on the other hand. Those are matters that cannot open by itself any ways to development. What really matters is what people want to do with the political and economic instruments. Disobeying is not unprecedented. Using an example in the precisely opposite angle, the conservative government of David Cameron was able to demand the EU for some space, in order to enforce policies that attacked foreign workers. That was despicable and it did not prevent a Brexit. For Portugal to make progressive policies, will the EU not have to give in?

Portugal is not a political or economic power as the UK is, but the strength of a democracy cannot be underestimated. We know that democracies are in danger, they are being squeezed between different types of austerity (from center-left to right-wing) and the progress of a reactionary wave featured by Marine Le Pen in France and Donald Trump in the USA. The forces of democracy will have to be mobilized by an alternative way that supports the workers’ interests. Portugal needs a social majority that stands against the barriers that may rise in the final breakdown of the impoverishment cycle. •

Bruno Góis is junior research fellow at the Institute of Social Sciences of Lisbon University, Master in International Relations, and Anthropology Ph.D. student. He is a member of Bloco de Esquerda (Portugal).