A friend’s daughter set out on January 19th from Montreal for Washington to join American protests timed to coincide with the inauguration of Donald Trump. She may not know that she is marching in a long Canadian tradition of cross-border feminist solidarity going back to a 1913 suffrage demonstration, also timed to coincide with a presidential inauguration. From the time of the suffrage movement to anti-Viet Nam war protests in the 1960s, Canadian women crossed the 49th parallel, both virtually and in person, to support American political causes which were also their own. Occasionally, Canadian soil provided a more accommodating meeting place: in 1971, American anti-war activists met with North Vietnamese women (who could not travel to the U.S.) in Vancouver to create an anti-war common front. 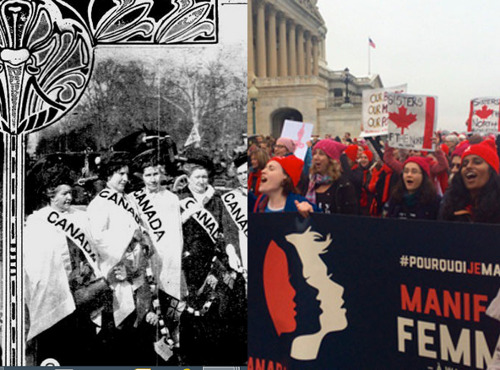 Women’s cross border political organizing speaks both to the cultivation of shared feminist aims and international solidarity, though it also reveals much about the contrasting political cultures and women’s movements in different countries, and the fragile nature of feminist coalitions. Take the voyage of Canadian suffragists to Washington in March of 1913 to participate in a parade timed to coincide with President Woodrow Wilson’s inauguration.

The Washington “parade” – really a demonstration in our parlance – drew thousands of women to the streets of the capital to make a political point for the new President: women’s suffrage had mass support. At the time, Wilson opposed votes for women: in his view, women had a place and that was tending the home fires, not voting for the House of Representatives. Wilson may appear on the surface to be diametrically different from Donald Trump. He was well educated, urbane, a former President of Princeton, later a winner of the Nobel Peace Prize for his international diplomacy. However, as recent protests at Princeton suggest, he was a reactionary on the question of racial equality and a supporter of segregation. Although he later acquiesced to women’s suffrage, in 1913, he was opposed.

Unfortunately, the Washington suffrage parade reflected something of Wilson’s ideas. African-American women marched at the back, a reflection of the American suffrage movement’s increasingly racist stance over the 19th century and early 20th centuries. Any hopes that some abolitionists once entertained of votes for both women and African Americans was overwhelmed by white women’s use of racist ideology to forward their own claims, though a few more radical suffragists on the socialist left supported rights for both women and African-Americans.

Canadian suffragists did not have the same penchant as the Americans for organizing demonstrations, though they sometimes participated in civic or Labour Day parades. Demonstrations, some Canadians worried, were more confrontational, possibly ‘unwomanly’, and would expose women to hostile comments and actions – the latter a very valid fear. A more popular public event designed to aid the cause in Canada was the Mock Parliament. Were Canadians, early on, attracted to irony and comedy as political statements? Mock parliaments were held across the country in various forms, as straight-up debates on suffrage and as role reversal mock-ups of all male parliaments; the latter, with their satirical spoofs of male legislators and their silly, irrational arguments against the vote, were particularly popular.

When the 1913 Washington demonstration was planned, however, Toronto journalist and suffragist Flora MacDonald Denison organized a Canadian contingent as part of the international delegations attending. Denison, one of the most important, long-serving Ontario suffrage activists, veered toward the democratic, radical, non-conformist side of the movement, but she drew together a coalition of suffragists of very different political stripes to go to Washington. It was an effort of some integrity since the Toronto movement had recently split into two suffrage groups, one of which contained more affluent women who had treated Denison, a working mother of middling background, with decided class contempt. The Canadian Suffrage Association and the Equal Franchise League joined forces, and on March 2, eighteen Canadian suffrage marchers and two others accompanying them, met for a public send-off with well wishers at Union Station. Three male supporters, including Denison’s ardently pro-suffrage son, Merrill, who was still in school, were part of the delegation. The Globe reporter covering the event thought the “quiet” group of “handsome” women might be taken for a holiday group: he was surprised suffragists looked so very ‘normal’.

The Canadian delegation already had an assigned place in the long march which was organized into sections by nation, state, suffrage organization, profession (doctors, lawyers), reform group (temperance and so on), gender (a men’s contingent) – and of course, race. The Canadian marchers would be placed close to those from Great Britain, a fitting juxtaposition since the Canadians were decked out in costumes that included the union jack, a reflection of the pro-Empire sentiment of the time in English, middle-class Canada. The Washington organizers allowed pride of place to countries where women had the vote (such as Finland, New Zealand and others), while Canada was situated with countries where there was ‘partial suffrage’, likely because some limited voting rights had been granted to women property owners in local elections for city councils and school boards.

The Washington parade was also a stylized public performance of some splendor: women “heralds” on horseback led various sections of the march, and there were elaborate floats and ‘tableau’ (still life pantomimes with women dressed as Justice, Liberty etc) adorning the steps of the Treasury Building along the route. Women were costumed, or wore all white dresses, decked out with suffrage colours, while bands accompanied the marchers with music. The Canadians, dressed in their imperialist garb with red maple leafs added, told reporters that they were generally greeted with positive cheers, “Way to Go Canada,” though some young men, one marcher later recounted, offered jeers, including “we would never have the vote,” and “that it was too cold to vote up at the North Pole.” Indeed, the jostling, jeers and violence directed toward some marchers became a post-parade scandal. An estimated hundred victims were taken to hospital after “drunken men” tried to “climb aboard floats and grabbed the women marchers, shouting insults” (Toronto Star, 4 March 1913). Many suffragists blamed disinterested police for their failure to control the violence.

Joining the U.S. demonstration was, on the one hand, an act of political solidarity, an emotional investment in international “sisterhood” that helped to sustain the spirits of suffragists. Canadian suffragists believed strongly in maintaining a connection to the international suffrage movement, although very few Canadians were active participants in international meetings abroad. Still, writing, propaganda, letters, films, and political reports criss-crossed borders, and Canadians often made their case for the vote by pointing to successes elsewhere, especially in the sister ‘colonies’ of New Zealand and Australia. Denison and long-time Toronto leader Dr. Augusta Stowe-Gullen (daughter of early Toronto suffragist Dr. Emily Stowe) were known in the U.S. for their long-time activism; they spoke at a public meeting at a Washington library the night before the march, offering their insight into the progress of the Canadian movement.

The Washington parade was also an educational lesson for the home audience, meant to show Canadians that wide support for suffrage existed in North America and beyond. At a follow up, public meeting held at the Toronto YWCA on March 27, some of the marchers spoke about their experience in Washington. Mrs. MacIvor said she felt embarrassed that the Americans were so far ahead of the Canadians and that “we women must take hold of the men,” lobbying our politicians as assiduously as the Americans lobbied their Congressmen. Harriet Prenter, an outspoken activist of Irish ancestry, added that there was no such thing as an “ignorant” voter as anti-suffragists claimed, save for one: anti-suffragist Ontario Premier James Whiteny, who, in claiming to vote on her behalf, clearly fit the “ignorant” category. Flora MacDonald Denison, Dr. Margaret Gordon, another Toronto stalwart, and Mrs. J.W. Bengough, wife of the satirical Grip editor and cartoonist, all offered their impressions of the Washington event.

Those eighteen Canadian marchers came together as a coalition to voice their solidarity with American suffragists, but during the First World War that followed just over a year later, disagreement and disunity emerged. Mrs. MacIvor and Mrs. Hamilton, who both spoke at the YWCA event, were ardently pro-war imperialists who denounced suffragist pacifists; Harriet Prenter wrote for a socialist newspaper deeply critical of the war. Denison was deeply troubled by the jingoism and anti-democratic sentiments behind much wartime rhetoric, and quietly left Canada in 1917 to work for the New York suffrage campaign.

Many Canadian socialist suffragists not only criticized the war, but also spoke out about class and economic inequality between women. Yet few Canadians were concerned with the discrimination of a suffrage march that relegated African-American women to the ‘back of the bus’. One of the slogans used at the Washington parade “Women of the world unite” (appropriated of course from Karl Marx) seemed a misnomer. As the Toronto women boarded the train in 1913, Flora MacDonald Denison was asked by a reporter if she thought the American women supported votes for “negro women”? She answered that the Canadian association “barred no person,” from joining, but she thought her Southern sisters “might not care to have a colored person ruling them.” Was she suggesting Canadians were more tolerant than suffragists to the south? It was a comforting thought, but one that many historians suggest was more wishful thinking than reality. •

Quotes from: The Globe; The Toronto Star. This article first published on the Women Suffrage and Beyond website.