It seems that we are condemned to live in interesting times. Decades of neoliberalism and austerity, capped by the election of carney barker Donald Trump as president of the United States. 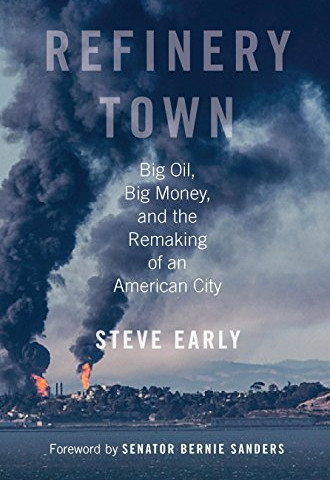 Of course, there have been glimmers of hope. The Occupy Movement, Idle No More and Black Lives Matter showed people fighting back against burgeoning inequality, the continuing effects of colonialism, and out of control police violence. Recently, the Bernie Sanders campaign gathered incredible numbers of enthusiastic supporters by addressing people’s economic and social concerns in a straightforward manner.

In the foreword to Steve Early’s Refinery Town, Bernie provides a perspective on the problems we face today and suggests that the book points in the direction we can go to begin addressing them:

“We need to start engaging at the local and state levels in an unprecedented way… [T]aking over city hall… won’t, by itself,
keep big money out of politics. It can’t stop climate change, eliminate economic injustice and racism, or stop law enforcement abuses… But local progress is still possible wherever we have government that represents all of us, not just the 1 percent. This timely book offers ideas and inspiration for making change were it counts the most – among friends, neighbors, and fellow community members.”

Sanders is right: the publication of Early’s book is timely. The building of local organizations is vitally important, as they can provide a means of addressing issues like mortgage foreclosures and rent control, both of which are increasingly relevant in today’s world, dominated as it is by neoliberal economics and driven by real estate speculation and runaway housing costs. In a time of increasing hostility toward immigrants and anti-Muslim sentiment, they can also help protect victims of racism as well as neoliberalism by organizing communities to provide sanctuary programs and meet people’s most immediate needs.

Refinery Town describes the experience of the Richmond Progressive Alliance (RPA) in California’s East Bay, showing that it is possible for community-based coalitions to overcome even the enormous wealth and power of a company like oil industry giant Chevron, which had dominated local politics in the area for generations, through corporate paternalism and strong-arm tactics. The kind of progressive change that is so badly needed will require the building of similar coalitions on widespread basis, both for the change they provide at the local level and as a sound foundation for the regional, national and international networks that we will need to confront neoliberalism globally. In any event, Early reminds us that under the prevailing circumstances, those seeking progressive social change “…have few short term options other than expanded grassroots work in the trenches of local politics, labor organizing, or social movement building.”

The problems facing Richmond at the end of the 20th century included a crack cocaine epidemic, widespread gun violence, rampant gang activity, and the highest level of AIDS in the Bay Area near San Francisco. To make matters worse, a 2003 fiscal crisis led to the laying off of 200 municipal employees and budget cuts that resulted in the closing of libraries and parks and the curtailment of fire services as well as those provided to seniors. It was in this bleak context that an “unlikely group of Greens, Latinos, progressive Democrats, African Americans, and free spirits” formed the Richmond Alliance for Green Public Power and Environmental Justice, the precursor of the RPA. This was a coalition held together by progressive values and dedicated to “civil rights, the environment, education, open government, and quality of life issues…” When, like so many other municipal governments, the Richmond City Council banned sleeping and camping in public places, the group mounted a campaign against police harassment of the homeless.

People’s Convention and Electing the Mayor

RPA members knew that success in turning things around in their town on a number of fronts would require the election of allies on the City Council. Convening a “People’s Convention,” hundreds of local residents created a set of local policies, including repeal of Richmond’s anti-homeless law, increasing municipal taxes on Chevron, punishing the company for its cavalier attitude toward pollution, strengthening community control over the police, fighting for affordable housing, promoting rent control, protecting against arbitrary evictions, setting a living wage, and investigating both the local budget crisis and the mismanagement that caused it.

By 2006, the RPA succeeded in making Richmond the largest U.S. city to elect a Green mayor. Capitalizing on this success, the organization appointed sympathetic activists to city commissions, boards and committees. Through extensive outreach work, the RPA administration was able to build its base, creating solid relationships with a range of community groups. Hiring a city manager who shared their views, the new city government promoted an approach dedicated to making city government accountable and transparent. The resulting Richmond General Plan outlined the RPA’s priorities for “land use, economic development, transportation, open space conversion, and arts and culture,” prioritizing “community health and wellness…”

When the housing crisis hit in 2012, it resulted in 900 foreclosures in Richmond. By the end of the following year, half of the city’s homeowners were under water, owing more on their mortgages than their homes were worth. Unlike other cities, however, the RPA council did not play the role of spectator in this disaster. Instead, by using the threat of expropriation, they forced mortgage companies to renegotiate the terms of their loans. Purchasing outstanding loans at prevailing market prices, the council reset the mortgages based on their current value, and put the resulting refinanced loans with lower payments back into homeowners’ hands. This helped a significant number of Richmond residents who would otherwise have gone under to hold on to their homes.

Refinery Town includes lots of other pertinent examples of what the Richmond city council has been able to do because it has been controlled by progressive, community-based forces dedicated to meeting the needs of residents rather than cow-towing to corporate interests. While many of these crises are similar to those in other localities, rooted as they are in the manifestations of problems rooted in the dominance of neoliberalism, the RPA doesn’t provide cookie-cutter solutions. What Steve Early’s portrait of the Richmond Progressive Alliance does provide is a model worthy of emulation. Using the RPA as a source of inspiration, activists everywhere can begin the process of building the kind of society we want from the grassroots up.

Steve Early will be making a book tour to promote Refinery Town early in the new year. As​ ​of now, he is scheduled to appear in several Bay Area locations​, Portland,​ ​Seattle, Vancouver​,​ Boston, Washington​ ​​DC​ and​ N​ew ​York C​ity. •