For the sixth straight weekend, hundreds of thousands of Koreans came out in Seoul (and with other Korean cities estimates approaching 2 million people on the streets) to demand the resignation of President Park Geun-hye. This Saturday December 3, the protests marched on the
Presidential Blue House. The three opposition parties introduced a bill last week to impeach the President, supported by a majority of the
parliament (171 of 300 members), for abuse of power in an influence-peddling scandal. But the vote needs a 2/3 majority and requires a rump of Park’s Saenuri party to break and support the opposition to pass the bill.

These are the largest demonstrations in South Korea since the pro-democracy movement of the 1980s. But the street protests are also against the neoliberal reforms Park has pursued and the attacks on the KCTU (Korean Confederation of Trade Unions), and an emphatic statement that all politics is not forming in a populist hard right. The below essays were written just after the fourth demonstration weekend.

Hundreds of thousands of South Koreans took to the streets in Seoul demanding President Park Geun-hye‘s immediate resignation on November 19. This protest was the fourth in a series of weekly mass demonstrations since October when it was first reported that Park was being secretly advised by Choi Soon-sil, a friend of 40 years who holds no official government title. 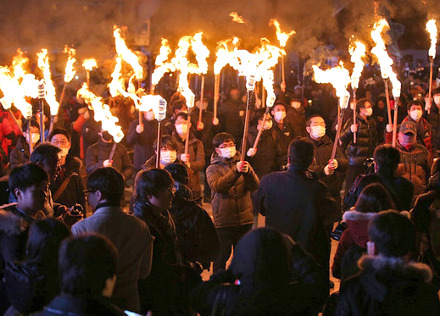 cronyism and corruption has triggered the worst political crisis in South Korea in decades. The biggest demonstration so far took place on November 12, when about 1 million people gathered in central Seoul. This was the largest anti-government protest since the June 1987 democracy movement when South Koreans forced the military regime to hold a free presidential election and eventually paved the way to ending the dictatorship.

President Park is the daughter of Park Chung-hee, a military dictator who ruled South Korea for 18 years, from 1961 when he took power via a coup until he was assassinated in 1979. While her father was in power, the current President Park acted as first lady at the age of 22 after her mother was killed in an assassination attempt against Park in 1975.

The friendship between Park and her confidante Choi Soon-sil dates back to the 1970s when Park first met Choi’s father, the founder of a religious cult who was believed to have become Park’s mentor and exercised cult-like control over Park until his death in 1994.

Choi is suspected of using her close ties to Park to pressure large corporations, the so-called “chaebol,” to donate nearly 77.4-billion won (about $70-million) to two foundations she runs. She is also suspected of meddling in state affairs and government decisions on personnel and policy behind the scenes, while gaining unauthorized access to classified information.

Initially, the corruption scandal was dubbed as “Choi-gate” and public anger was directed mainly at the “shadow president” – implying that Choi exercised an undue influence over Park and used her personal connection to coerce businesses into donating money to her foundations, amass an illicit fortune and win favors for herself and her family.

But according to leaks from sources describing the investigations, it turned out that President Park is the main culprit in this corruption scandal. On November 20, prosecutors issued an indictment against Choi in which they indicated that Park was an accomplice in the crimes, effectively making her a suspect rather than a witness.

According to prosecutors, Park “played a large role” in the efforts to raise money from the businesses to set up the foundations run by Choi. However, the South Korean constitution bars bringing criminal charges against a sitting president, except in cases of insurrection or treason – though investigations are permitted.

The allegations of corruption, abuse of power, embezzlement and cronyism stirred public anger and outcry for Park’s resignation or impeachment. Park’s approval ratings have plummeted to 5 per cent, the lowest in the history of South Korea.

While denying any involvement in wrongdoing, Park has issued public apologies twice since the corruption scandal broke out.

Moreover, according to an insider, when she was advised to step down to quell a wave of popular fury, she allegedly responded by saying, “What did I do wrong?” – signaling that she wasn’t willing to hear the voices of the people and would hold out no matter what until her five-year term ends at the end of 2017.

This arrogance has fueled more public anger against Park. It’s expected that more people will participate in the next scheduled mass protest this coming Saturday demanding her resignation.

While people in the streets are demanding Park’s immediate resignation, opposition parties, though emboldened by the massive protests, have yet to seriously push for Park’s resignation over fears of negatively impacting next year’s presidential election. It seems that what they’re most interested in is containing people’s anger and channeling it into their electoral victory next year.

Attacks on Workers Have Intensified

South Koreans are angry over the corruption involving Park and those around her. But that isn’t the only reason there’s such huge outcry. When she became South Korea’s first female present in 2013, Park promised sweeping economic reforms to bridge the growing income inequality between rich and poor and address unemployment and a stagnant economy.

She said that she would help the country repeat the so-called “Miracle on the Han River” – a reference to the rapid economic development seen under her father’s presidency. Park promised to create jobs and build a “creative” economy that would be less dependent on South Korea’s dominant big businesses, called “chaebol,” and would bring about “economic democratization” by prioritizing job creation in science and technology.

During the last four years, however, she has demonstrated her heavy-handed leadership style and lack of transparency, which very much resembles her father’s authoritarian rule. Just like her father, under Park’s presidency, attacks on workers’ rights, working conditions and wages have intensified, and a ruthless crackdown on dissent has continued.

For example, Han Sang-gyun, president of South Korea’s independent Korean Confederation of Trade Unions (KCTU), was arrested last year and is still in prison after being sentenced to five years imprisonment for organizing a series of demonstrations against the Park administration.

Privatization of healthcare and railroads is also underway, which has prompted recent strikes by workers in these sectors. In coordination with the U.S., the Park administration is about to deploy the Terminal High Altitude Area Defense in a rural town in South Korea, threatening the environment and the farmers who live there.

In summary, Park’s promise of repeating the “Miracle on the Han River” has become a nightmare for ordinary South Koreans. As public discontent has grown, Park’s party, the ruling Saenuri Party, has lost its parliamentary majority in the general election held in April 2016. •

SooKyung Nam writes for the Socialist Worker, where this article first appeared.

The other main national centre FKTU held a national rally November 19. Hundreds of thousands of people took to the streets on 12 November, demanding that Park, whose Presidency is under siege over allegations of corruption including illicit payments by Korean “chaebol” conglomerates including scandal-ridden Samsung. The national parliament has now appointed a special prosecutor to investigate the allegations. Samsung and other chaebols, with opaque governance practices and riddled with nepotism, are coming under intense scrutiny, including for their covert relationships with Park’s entourage.

Park’s term in office has been marked by aggressive repression of trade unions, with KCTU President Han Sang-gyun imprisoned for five years in the Seoul Detention Centre for helping to organize previous public protests. Han, who is one of twenty union leaders currently in prison, met a delegation of global union representatives which was present in Seoul during the weekend protest.

“The Park government’s crackdown on legitimate union activity is having terrible consequences for Korean workers. Workers are being forced to do up to 100 hours of overtime per month, threatened with dismissal if they don’t comply, and employers frequently sack workers who try to join unions. In many companies, health and safety standards are appalling, sexual harassment is rife and workers are treated with total contempt by their bosses,” said ITUC General Secretary Sharan Burrow.

Korean companies such as Samsung and LG are well known for their opposition to unions in their supply chains, with supplier companies closely monitored for any sign of workers organizing. Suppliers know that if a union is formed, their company faces exclusion from the supply chain. Hyundai too has engaged in union-busting in its supplier companies.

The government has already decreed the KCTU’s planned strike to be illegal. •