On the morning of November 4th, 2016, Brazilian military and civilian police used violent force to storm Brazil’s, Landless Workers Movement‘s (MST) Florestan Fernandes National School (ENFF) in Guararema, outside of Sao Paulo in Brazil. According to several witnesses, the police stormed their way into the facility by forcing their way through the main gate shooting live bullets, and threatening people. 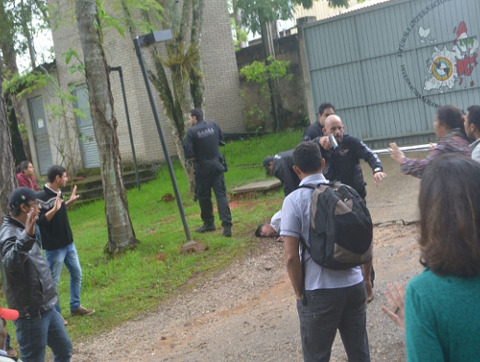 As a founding member of Via Campesina, the MST has worldwide recognition as an important peasant social movement, with a commitment to the protection of rural communities and workers and the struggle for land reform. The Florestan Fernandes school has been committed to building social consciousness and popular unity for over 10 years. Hundreds of students are currently studying at the ENFF which is administered by the MST to provide political and socioeconomic education to working class youth and adults from around the world.

The act is clearly a violent action taken by the current illegitimate government to intimidate the MST and their allies, who stand in clear opposition to the administration of Michel Temer, who led the parliamentary coup against elected president Dilma Rousseff and took control of the government in August of this year. The attack is part of a broader policy of criminalization of social protest and attacks against the MST.

The campaign of terror against the MST has already left its mark on two other states in Brazil: Parana and Mato Grosso do Sul, where civil police arrested members of the MST calling them members of criminal organizations, despite the Supreme Court of Brazil recognizing the MST as a legitimate organization.

We the undersigned organizations and social movements condemn this violent act against the ENFF and the MST, which stands in stark contrast to the democratic and constitutional rights Brazilians have fought to secure. To organize against an oppressive system is not a crime, it is a responsibility. We express our total solidarity with the MST and demand the appropriate investigations be launched to bring the responsible to justice. We also ask the international community to join us in solidarity with the largest social movement in the Americas. •

More news on this situation:

The Brazilian Landless Workers’ Movement (Movimento dos Trabalhadores Sem Terra, or MST) is one of the largest movements in Latin America with an estimated membership of 1.5 million members across 23 of Brazil’s 26 states. It has been at the centre of the international peasants’ movement, La Via Campesina. The MST’s aims are to fight for general access to the land for poor workers through land reform in Brazil, land occupations and through activism around social issues related to land possession. This is part of a wider agenda of addressing unequal income distribution, social inequalities related to race and gender. The MST has worked at a self-sustainable way of life for the poor in rural areas, linked to the wider struggle for new forms of socialism. •

More on the history of MST: “History of the MST.”