Is ‘Postcapitalism’ On the Horizon?

Paul Mason is a leading British economic journalist, currently a columnist for The Guardian. He is also a long time left political activist. His new book, Postcapitalism: A Guide to Our Future (Farrar, Strauss and Giroux. New York, 2015) is a challenging, sometimes obscure, sometimes brilliant, eminently worthwhile read, and an optimistic take that the left might, once again, be marching in tune with the forces of history. 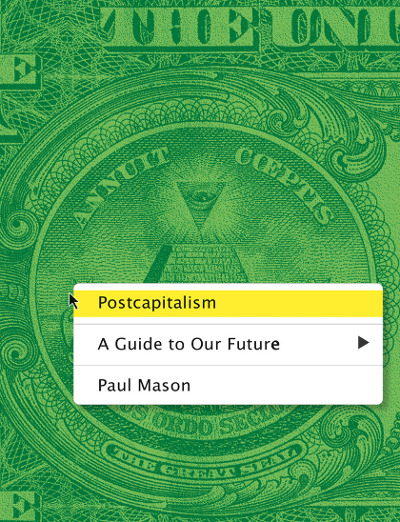 Mason is, to say the least, highly original and idiosyncratic. His book is partly addressed to the orthodox Marxist left, endorses and builds upon the labour theory of value, takes seriously the possibility of a planned, non market economy, and pays tribute to the traditions of radical working-class socialism. At the same time, he is emphatically non Leninist, sees networked knowledge workers as the key contemporary agents of social change, and draws heavily on pro capitalist thinkers from Schumpeter, to management theorist Peter Drucker, to
contemporary cheerleaders for the supposedly transformative knowledge and network based new knowledge economy.

The argument begins with the crisis of contemporary neoliberalism dating back to the financial and global crisis of 2008. Together with many left economists, Mason envisages a dismal future of secular stagnation, ever more extreme income inequality, massive job losses due to technological change, unsustainably high levels of public and private debt, and chronic global trade imbalances. He argues that capitalism faces an acute impasse due to catastrophic climate change and pending massive defaults on debt.

Mason argues that capitalism has periodically radically mutated and morphed into new forms in response to crises, but that this is unlikely to recur given that political opposition to neoliberalism has been so weak due to the decline of the labour movement. Further, new technology and new relations of production this time around will not boost profits or revive investment. Neither a Schumpeterian style new wave of innovation nor a social democratic style fix are on the horizon of plausibility.

The most original part of his argument is that the info tech revolution and the emerging network information economy (the changing forces and social relations of production in Marxist terms) are not ultimately compatible with a capitalist economy, Capital is doomed to crisis, decline and decay since it increasingly cannot capture the value created by the emerging new knowledge economy.

Four Key Strands to the Argument

First, the new economy has seen the emergence of goods and services that have zero or very low marginal costs. Information can be readily copied and shared. For example, Apple provides most of the world’s digital music (more than 70 per cent) and could in principle provide almost all existing recorded music to everybody in the world at near zero marginal cost. Pricing power only exists by virtue of low prices applied to a monopoly share of the market and fragile and contestable intellectual property rights.

The major digital economy companies which have disrupted major economic sectors survive by creating inherently unstable and vulnerable monopolies such as Google (search engines), Apple (music and other digital media within a corporate walled garden), and Facebook (social media). They may be profitable today, but the economic logic they are based upon tends toward zero prices and zero profits (hence, one can add, as the author does not, the stress of corporate interests on securing intellectual property rights in new investment agreements such as the TPP.)

Second, the new economy has seen the autonomous, non commercial rise of free and almost free goods and services. A mobile phone with an internet connection provides near zero price access to knowledge (farewell to many commercial media) and access to non commercial products such as Wikipedia and open source software which are produced to be shared rather than as a source of profit. The network economy enables individuals to produce and widely circulate blogs, music, works of art, movies, e-books and to generally share free knowledge largely outside the commercial sphere and the price system. Wikipedia is a key example of gift exchange and peer to peer production growing relative to market exchange.

Third, less and less labour is needed to produce goods and services in the age of the intelligent machine and robots. This ultimately undermines profitability since direct labour input is (on Marxist grounds) the ultimate source of value. In any case, automation and the displacement of workers by machines polarizes a shrinking workforce between knowledge workers and low paid workers in “bullshit jobs” (a useful new technical term.) Changes in production relations undermine effective demand, and emerging info- capitalism cannot resolve the increasingly chronic labour displacement/underconsumption problem.

Fourth, production is increasingly driven by knowledge, and knowledge is free and shared through networks. This stands in fundamental contradiction to the hierarchical control of knowledge within the capitalist corporation. “The main contradiction of modern capitalism is between the possibility of free, abundant socially produced goods and a system of monopolies, banks and governments struggling to maintain control over power and information. That is, everything is pervaded by a fight between network and hierarchy.”

Mason envisages a long transition to socialism analogous to the gradual emergence of capitalism and markets within the shell of feudalism. He rejects Stalinist style central planning, and makes much of the ability of sophisticated computer technology and networks to plan in a relatively decentralized way, perhaps eventually moving beyond market allocation. The key institutions of a socialist economy will be a socialized financial system and socialized large monopolies combined with decentralized forms of social ownership such as co-ops and networked small producers. There will be a radical reduction of working time due to automation and a gradual shift to a non scarcity economy in which allocation of goods and services takes place outside of the labour market through some form of universal income.

All of this is presented with great brio, punctuated by penetrating insights and a remarkably eclectic marshalling of obscure debates and texts such as Marx on knowledge and machines in the Grundrisse.

An intellectual influence is Alexander Bogdanov, the Bolshevik economist and author of the science fiction novel Red Star featuring a socialist Mars where
knowledge workers manage a totally automated economy providing abundance for all. They choose to destroy Earth on the grounds that its inhabitants are too stupid to embrace socialism. (Definitely next on my reading list.)

But the whole is less convincing than many of the parts.

Mason fails entirely to engage with the argument of Robert Gordon that the networked information technology/automation revolution is too small to drive the economy as a whole, as shown in part by dismal labour productivity growth. In effect, he presents us with a socialist gloss on the myriad techno-optimists. That said, it is hard to contest the fact that knowledge based corporate monopolies which operate at or near zero marginal costs indeed make up an increasing share of the economy and have a growing impact on how the overall economy functions

Mason also fails to elaborate any political strategy for transformation. He writes off the traditional working-class in an almost elegiac chapter devoted to the history of the labour movement, stressing past attempts to build islands of worker power in factories and communities. But he says little or nothing about political movements of precarious workers or about how networked knowledge workers might indeed be won to socialism. He says rather little about the impact of new technologies on work. But info capitalism is very far from displacing socially necessary labour, even if it may be tending in that direction, and it is hard to imagine universal displacement of labour by knowledgeable machines.

None of these criticisms detract from a very provocative and engaging attempt to engage with contemporary capitalism and to assess the prospects for radical change. •

Andrew Jackson is the former Director of Social and Economic Policy at the Canadian Labour Congress, and author of the recent book, The Fire and the Ashes: Rekindling Democratic Socialism (Toronto: Between The Lines, 2021).