Getting Ready for the Tory Storm in Manitoba

No one has a crystal ball that allows them to foresee precisely what’s going to happen as the new Tory government of Manitoba really gets down to business in the months ahead. But there are some things we can be pretty sure about.

The Tories will claim that it’s vital to curb provincial government spending to reduce Manitoba’s deficit and move toward balancing the budget. In reality, there’s no deficit crisis. Not only was the share of provincial revenue spent on servicing the debt in the 2015-16 fiscal year low, it was lower than it had been three years prior. The Tory “cure” – austerity – for the non-existent crisis might not even lower the deficit. 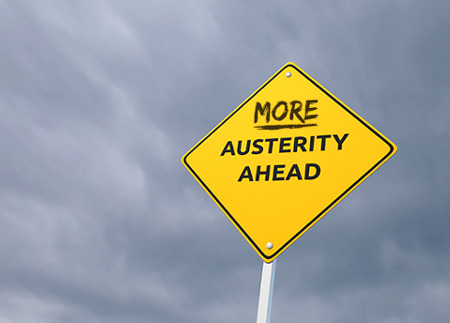 But a balanced budget isn’t the real objective (if the Tories had inherited one, they’d simply be talking about ‘reinventing government’ or some other justification for their program). Although some Tory MLAs may be so naive as to believe that lowering the deficit is the government’s true goal, and that doing this will somehow lead companies in Manitoba to hire more people and pay them more, they’re wrong on both counts.

One of the things that this government’s strategic thinkers really want to do is weaken public services. Deficit reduction is a means to that end. The Tories embrace this goal because they are ardently committed to neoliberal ideology. This vision aims to make people more dependent on markets (in other words, private firms) to meet their needs. It favours the delivery of healthcare, social services and education by for-profit firms. So we should expect not just spending cuts but also moves to create new opportunities for companies to make money, through privatization, contracting-out, deregulation (coming soon: Uber?), public-private partnerships (P3s), social impact bonds, and schemes that claim to offer people more ‘choice’.

It’s worth emphasizing that the Tory goal isn’t getting rid of government, as some critics will say. One of the key goals of neoliberalism “is to redefine the shape and functions of the state, not to destroy it,” as the astute analyst Philip Mirowski has pointed out. The Tories want to use government powers to push markets deeper into society. This includes reorganizing what’s left of the public sector so it operates more like the private sector. They’re also keen on pumping up one part of the state: the already-inflated violent system of policing and prisons.

One of the other things the Tories are eager to do is weaken unions and workers’ rights, since these are barriers to higher corporate profits (just like environmental and other regulations on what companies can do, which they also want to take down). The fact that the public sector is highly unionized is another reason why the Tories so like the idea of restructuring it in neoliberal ways. Changing the Labour Relations Act to make it harder for workers to unionize may be just the start of an assault on unions. Watch out for changes to the Employment Standards Act too. The Tories can’t even pretend that these moves have anything to do with lowering the deficit – higher profits is what they’re all about.

Potential for Protest, and More

The weakness of grassroots union activism and community organizing to demand change in Manitoba mean that few people have experience acting collectively to defend their interests (unlike in Quebec, for example). The discrediting of the NDP after its decisive election loss means that many people think there’s no alternative to what the Tories propose.

For these reasons it may well be difficult to mobilize much protest until the Tories introduce big cuts or really aggressive legislation. But as the response to the Newfoundland Liberal government’s attacks this year makes clear, such attacks can quickly spark opposition on a scale that most foes of austerity would have thought impossible.

Yet even if the Tories proceed cautiously their attacks will harm many people. This will create possibilities for protest and, going beyond that, real resistance that tries to stop attacks. Even small-scale short-lived mobilizations can contain seeds that may flower into ongoing organizing efforts in workplaces, on campuses, in neighbourhoods or among specific communities of people. The Tories are less popular among indigenous people than in the non-indigenous population, so indigenous mobilization may develop more quickly.

Starting from where we’re at, we should aim to build protests that escalate to higher levels of resistance, including strike action. What’s needed is a mass social movement that can force the government from office, much as happened in Quebec in 2012. That’s a long shot, but it is what we should aspire to.

Right now, planning public protests against Tory attacks is a first step. Another is equipping more people with a clear understanding of neoliberalism and with organizing skills. •

This article first published on the Solidarity Winnipeg website.