Disabled People Give Lead In Fight Against UK Austerity

I recently had the enormous honour of representing the Ontario Coalition Against Poverty (OCAP) at a week of action and international conference, organized from September 4-10 by Disabled People Against Cuts (DPAC) in the UK. This was another step in building a close working relationship between our two organizations. It was also fascinating and inspiring to see disabled people, not merely participating in the struggle against austerity but actually giving a powerful and decisive lead to the entire movement. 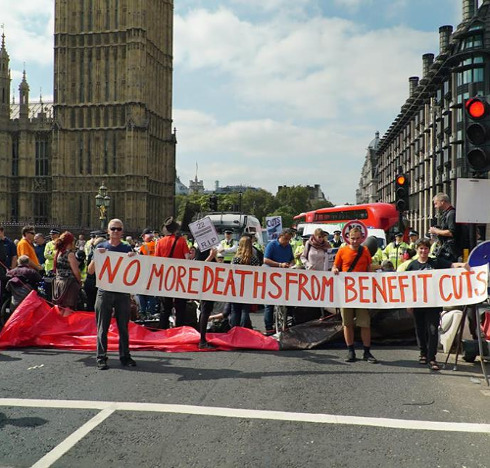 Since 2010, governments in the UK have moved into a cutting edge role in the implementation of the agenda of austerity. Central to this has been a drive to degrade and undermine income support systems so as to generate a climate of desperation and to force people into low paid, precarious work. A notorious system of ‘benefit sanctions’ has ensured that those forced to seek assistance live in a state of ongoing uncertainty, under constant threat of suspension or outright cut off.

However, a striking feature of the austerity attack in the UK has been an extraordinary and brazen readiness to attack disabled people living in poverty. When the whole edifice of English Poor Law provision was put in place, there was an assumption that those seeking assistance could be divided into the more and the less morally worthy, the ‘deserving’ and the ‘undeserving’ poor. ‘Able bodied’ and employable people were considered highly suspect and subject to outright abandonment, whereas those who could not be so readily assumed to be the architects of their own misfortune, particularly disabled people, might expect somewhat fewer conditions and scrutiny to be attached to the pittance they were provided. The austerity agenda of the 21st Century, however, has no patience with such sentimentality. It’s considered essential that disability, even of the severest kind, should exempt no one from the scramble for the lowest paid and most exploitative jobs.

First implemented, shamefully, by a Labour Government, the infamous Work Capability Assessment (WCA) was toughened by the Tory led Coalition in 2010 and its implementation handed over to private companies. First, at the hands of the hated Atos and, then, the U.S. based Maximus, sick and disabled people have been subjected to a regime of degrading scrutiny and lethal abandonment that has been shocking beyond description. DPAC has played a truly inspiring role in acting to challenge and resist this profound and massive injustice.

This extreme concern to ensure that almost no one be considered unable to participate in the scramble to find employment, has huge implications in terms of the international implementation of austerity. Certainly, Ontario has been impacted by this approach to ‘public policy.’ Here, the institution that has gone the furthest in this regard is the Workplace Safety and Insurance Board (WSIB) as it oversees the persecution and impoverishment of injured workers. The WSIB displays willful disregard for medical evidence and an obsessive readiness to deem workers capable of performing work they have no realistic hope of obtaining or being able to perform.

Those disabled people who must rely on the Ontario Disability Support Program (ODSP), are facing a regime that is focused on blocking and restricting eligibility to the greatest degree possible. The same determined drive to insist that virtually everyone is ready for work in some theoretical form is a central consideration. While a major redesign of ODSP appears to delayed due to yet another round of social assistance review and consultation by the Ontario Government, the previous ‘Brighter Prospects’ report that the Liberals commissioned makes clear that the concept of somewhat secure disability benefits is incompatible with the prevailing political agenda.

The DPAC week of action was of importance, not only because we in Ontario face the same kind of attacks, but because the model of resistance that has been created by an organization of disabled people in the UK holds lessons for all of us. The recent upsurge of support around the leadership of Jeremy Corbyn in the Labour Party notwithstanding, it would be impossible to deny that a sweeping movement of resistance to austerity in that country is yet to emerge. As real wages have declined on a scale comparable to that of Greece, strike activity is at historic lows. Social movement struggles continue but the needed critical mass of social resistance is yet to be set in motion. The Tory architects of social regression probably thought that disabled people would be among the least combative of their victims but this proved to be a serious miscalculation. The week of action that I had the privilege to play a role in drove this home to me very powerfully.

Throughout the week of September 4, a range of actions unfolded in a whole number of towns and cities. I was able to participate in several of the actions. Without doubt the most inspiring and important was held on September 7. DPAC members and supporters marched to the Houses of Parliament and blocked Westminster Bridge, bringing traffic to a halt. It took the police a couple of hours to clear scores of disabled people, many of them in wheelchairs, from the bridge. A few arrests occurred but the calm determination of people who were fighting back against lethal benefit cuts was unbeatable. It was easy to see why DPAC’s readiness to defy those responsible for these attacks has been so profoundly inspiring to the entire movement against austerity in the UK.

On the Saturday, the week culminated in a one day conference, devoted to the theme of “Disabled Peoples’ Resistance: Building Beyond Borders.” Presentations were made by people from Ireland, Greece, Bulgaria, Germany and I was able to report on the struggles underway in Ontario. “Emancipation Movement of People with Disabilities: Zero Tolerance” presented a video on an occupation they had carried out at a centre for disabled children in Lechaina, Greece. They were challenging the rampant neglect and abuse of children in these centres face, some of them strapped to their beds for every hour of the day and night. They are demanding the Syriza led Government deal with this appalling mistreatment at such places and several international solidarity actions will be taken to assist their struggle, including here in Toronto.

Coming out of the week of action and conference has been a renewed commitment to developing much more dynamic forms of international solidarity. We discussed ways to act together in support of our different struggles and to deepen our understanding of the attacks we face and the lessons that can be drawn from the forms of resistance we take up. Seeing the abuses faced by the disabled in austerity wracked Greece, this disgraceful removal of social provision in the UK or the failure to provide shelter from the elements for the homeless in Toronto, it’s clear that the agenda thrown against us is becoming ever more reckless and harmful. The lead that DPAC has given in this regard is a lesson to movements against austerity everywhere and opens up huge possibilities for the struggles that lie ahead. •