The Canadian Union of Postal Workers (CUPW) is currently engaged in collective bargaining with Canada Post. Unlike in previous rounds, the contracts of both the Urban bargaining unit (covering about 42,000 workers) and the unit of some 8,000 Rural and Suburban Mail Carriers (RSMCs) are being negotiated simultaneously. 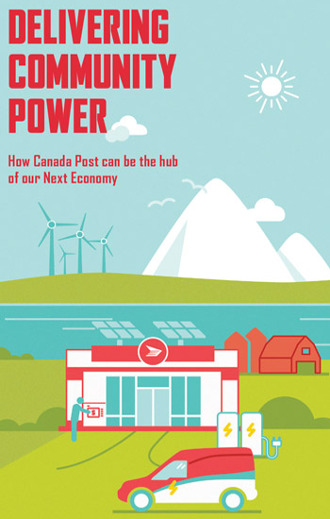 That’s not the only reason that this round of bargaining is unusual. This is a rare case of a public sector union not only trying to defend its past gains but also to change the nature of the work its members do. CUPW is backing a visionary plan to transform Canada Post called Delivering Community Power (DCP) and trying to win some of its elements at the bargaining table.

For its part, Canada Post management – led by CEO Deepak Chopra, who was reappointed to his position by Stephen Harper shortly before the last federal election and then refused the new Liberal government’s request to resign – is not proposing the status quo either.

The employer has proposed that all future regular employees in both bargaining units will have a defined contribution pension plan instead of joining Canada Post’s existing defined benefit pension plan. On top of weakening Urban workers’ vacation entitlements and health and safety training, Canada Post wants to shrink the number of full-time workers with open-ended contracts and increase the number of part-time and temporary staff. It also wants the right to close any or all of the close to 500 retail outlets it still runs. It wants to eliminate Appendix T of the Urban collective agreement, which deals with service expansion and innovation and provides for pilot projects. This is an attempt to kill discussion of the DCP plan.

These demands reflect management’s ongoing effort to make work at this federal crown corporation more like work in the private sector – above all, to make postal workers’ jobs less secure. They are consistent with a longer-term perspective of trying to privatize at least the most profitable part of the organization, parcel delivery (Canada Post has been profitable for 20 of the past 22 years, with first-quarter profits in 2016 amounting to $44-million – while letter mail volumes are shrinking, parcel deliveries rose 27 per cent between 2011 and 2015, thanks to online shopping).

CUPW is resisting the effort to roll back workers’ past gains. Its leaders have pledged to reject any “two-tier” proposals that would create worse jobs for future hires while not immediately affecting people currently working at Canada Post. As CUPW’s chief negotiators have written, “what about the next round of negotiations? … Once we open the door for two-tier pensions and benefits they will keep coming for more.” This stance is noteworthy because multi-tier arrangements – which deepen divisions between new (mostly younger) workers and existing workers – and other concessions by unions have become common.

The union is also fighting to improve members’ jobs and expand the services they deliver. One of its priority demands is pay equity for RSMCs, who are mostly women and make 28 per cent less than mostly-male Urban letter carriers. It has a set of proposals to improve health and safety at Canada Post (where disabling injury rates are higher than in any other segment of the portion of the workforce that is regulated by federal rather than provincial government rules). These include ergonomic studies on new equipment and work methods, stronger overtime limits and a return to allowing letter carriers to carry mail in one bundle rather than two.

CUPW proposes to expand services by extending hours at Canada Post’s retail outlets, restoring door-to-door delivery in the urban areas where it was cut under Harper (the employer’s plan to eliminate door-to-door has been frozen since the Liberals took office) and reintroducing postal banking.

In many other countries post offices offer banking services. Until 1968 Canada Post did too. One aspect of DCP – a multi-pronged plan backed by CUPW, the Leap Manifesto team and other organizations – is for Canada Post to again offer a selection of basic financial services through its over 6000 outlets. Postal banking would be particularly helpful for people living in rural areas and First Nations communities, few of which have bank branches, and for low-income people in cities, including the close to two million people per year who use payday lenders.

The aim of DCP is to make Canada Post “the hub for our Next Economy,” one that’s moving rapidly away from fossil fuels to renewable energy. In addition to postal banking, DCP’s wide-ranging proposals include replacing gas-burning Canada Post vehicles with electric vehicles, installing charging stations at Canada Post facilities to spur the use of electric vehicles in society, expanding door-to-door delivery, having postal workers help with community elder care, and making it possible for people to order fresh farm produce through the post office.

While DCP itself is not on the bargaining table, CUPW is pushing for postal banking and defending Appendix T, without which it would be harder to implement DCP.

What we have here is nothing less than a clash of visions for the public postal service. A strike or lockout in August seems increasingly likely.

What makes this set of negotiations even more important is that the federal government is now conducting a review of Canada Post. The report of the review task force could lead to major changes at the crown corporation. The strength of CUPW’s contracts will influence the impact of such changes and possibly their substance too.

If the outcome of this round is an employer victory, the ripple effect will be felt far beyond Canada Post. On the other hand, if postal workers are able to make gains or even just beat back demands for concessions, the expectations of other workers – steadily lowered by a decades-long employers’ offensive and the chorus of influential voices saying that working people shouldn’t hope for job security and good pensions – could be given a welcome boost. Success in achieving any element of the DCP plan could inspire activists in other unions to develop proposals for changing work in ways that both address climate change and improve society. •