Standing Up to Verizon’s War on Unions

Unions representing nearly 40,000 Verizon workers have announced plans to hit the picket lines on April 13, in what would be one of the largest strikes in the U.S. in recent years. The workers, members of the Communications Workers of America (CWA) and International Brotherhood of Electrical Workers (IBEW), are fighting aggressive attacks on their compensation, job security and more – carried out by a corporation that is raking in the profits, but won’t be satisfied until it breaks the power of their unions.

Danny Katch talked to a CWA shop steward from New York City about what’s at stake in this battle and why Verizon workers deserve solidarity. This interview first appeared on the Socialist Worker website.

Danny Katch (DK): What are the main issues in this contract fight? 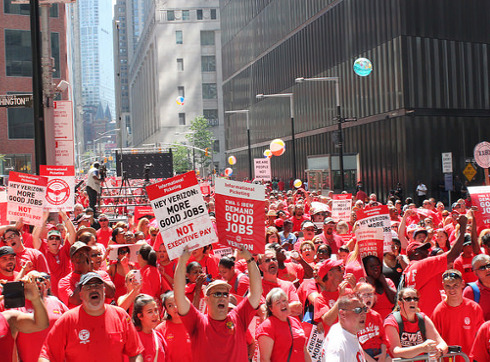 CWA: There are a lot of issues that we’ve been bargaining concessions over the past several contracts. Verizon is attacking our medical, our pensions, disability, overtime – all of our compensation is under attack.

What’s different about this contract is that they’re attempting to destroy Article 8, which protects our right to show up to work in the same place, every day, a reasonable distance from where we live. They’re pushing to change transfer rights to favor the company to the point that they will be able to transfer us anywhere in the company footprint for up two months at a time, during which we’d live in hotels away from our families and communities.

There’s also been an erosion of call center work and an increase in contracting out, and this contract would allow for closing more call centers and transferring members up to 80 miles from their current job sites, as well as opening the door to increased international outsourcing.

CWA: We currently have two tiers of job security. For people hired before 2003, we have essentially ironclad job security. People retire of their own volition or take an incentivized buyout. For people hired after 2003, it’s much easier to be laid off, which we’ve seen in New York City, where it’s very hard to find anybody working on the technical side with less than 15 years on the job.

For this contract, they’d like to eliminate job security across the board, no matter how long you’ve been in the company.

DK: Verizon has made $39-billion in profits over the last three years. They don’t seem to need concessions in order to survive. What do you think are the company’s goals with these contract demands?

CWA: They’re trying to streamline their operations. They’re transforming the company to be more oriented on Wireless, and they’d like the wireline side to be more flexible and modeled more on the workplace culture of Wireless, which is still overwhelmingly non-union.

The issue with the transfers is that as the company replaces the 100-year-old copper-based network with the fiber-optic network that carries their FIOS product, they need short-term, high-intensity workforces to build the network, and then move on to the next build.

So their vision is a migrant workforce that follows the work from state to state. Obviously, this model favors younger workers who are not tied down and have much lower expectations for how they should be treated within the company.

DK: The contract expired last August. Why have things come to a head now?

CWA: I think it’s become clear now that the company has drawn a line in the sand, and they’re not going to shift without a major action on our part. They’ve essentially stuck to their proposals since August, and even though the union volunteered $200-million in concessions in the late winter, the company wasn’t interested at all.

The company made noises that this was its last best offer on medical and other major issues, and in a situation where the union and the company can’t agree to terms on specific articles, the company has the power to impose its version of the settlement.

So the stakes are very high. If the union accepts this horrible transfer concession, it’s going to spell the death of the union. Too many of us are older and have established families and roots in our communities to pick up and leave for two months at a time. This is a make-or-break issue for the union.

DK: The CWA is the biggest union to endorse Bernie Sanders for the Democratic presidential nomination, and the strike will be happening while the Democratic candidates are competing in the New York primary. Is that a coincidence?

CWA: The union is looking to use the Sanders campaign to highlight everything that’s wrong with Verizon. Verizon maps perfectly with everything that Bernie’s campaign has said about the 1 per cent and Wall Street’s greed and transferring wealth and control from workers to bosses. So this is a real boon for the union that the class anger that’s boiled for years under the surface is being exposed and validated by the Sanders campaign.

This is a critical week because of the New York primary, and the union will be participating in various Sanders events. CWA President Chris Shelton will be introducing Bernie at a rally on Wednesday in NYC, and numerous local rallies will be happening around the primary to build a connection that this is bigger than Verizon.

But winning at Verizon would be a good first step in the kind of political revolution people want to see Sanders bring.

DK: What do you think it will take for the union to win a strike?

CWA: I think it’s a scary prospect to be on strike right now. This can be a protracted and brutal strike. I think the union will have to look very strategically at how we’re building community support, which it’s already begun to do around issues of the digital divide. There are glaring holes in the FIOS network that has replicated the lack of access that predominantly Black and immigrant low-income neighborhoods already suffer from.

But the heart of this strike has to be militant participation by the union membership. Because the company is so focused on finishing FIOS builds in high-density, high-income areas like Manhattan, stopping scab operations should be the forefront of the union strategy.

DK: Why should people support Verizon workers, and what can they do to help?

CWA: Like I said before, Verizon could be the poster child of corporate greed. It’s not just about money, it’s about companies that pay no taxes getting to dictate your life outside of work as well – that you won’t get to see your families for two months. They want to change the overtime rules so that you have a seven-day workweek and never get two days off in a row.

People can support us by showing up to picket lines and rallies, by stopping automatic bill pay [if they have a Verizon account] and wearing buttons in support of the union – and by organizing a union in their own workplace! •