What Die Linke Should Do

The March 13 regional election results were a bitter setback for Die Linke and everyone fighting for social justice and democracy in Germany. The results of the parliamentary elections in Saxony-Anhalt, Baden-Württemberg, and Rhineland-Palatinate signify a major shift in the political landscape. 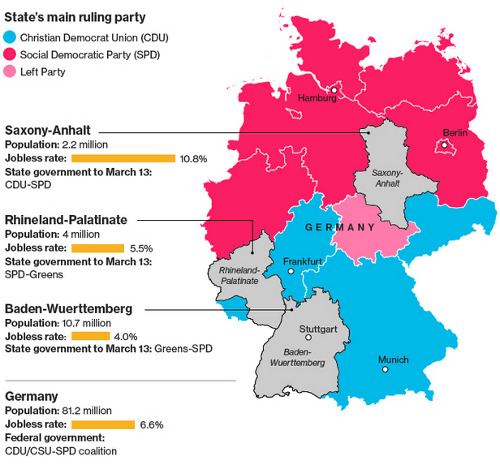 For years now, studies have identified a potential voting base for parties of the far right ranging from 15 to 20 per cent of the electorate. Germany’s rising right-populist force, the Alternative for Germany (AfD), has now managed to capture and concentrate this potential. But knowing this is not cause to breathe a sigh of relief – if anything, it’s quite the opposite, because the AfD is really just the tip of the iceberg. Germany is currently experiencing a dangerous rise in right-wing violence against refugees, which in turn is part of a broader right-wing Kulturkampf characterized by the anti-Muslim racism of figures like Thilo Sarrazin and growing reactionary mobilizations against the achievements of the women’s movement.

The “grand coalition” has gradually adopted more right-wing positions, mediated by the racist public outbursts of Horst Seehofer and the Green Party’s support for further restrictions to asylum law. In other words, the AfD is getting exactly what it wants: political discourse as a whole is drifting steadily to the right.

Many people whose social situations have not improved or who harbor fears of downward mobility voted for the Right. They did so to send a message to the established parties and the parties of the grand coalition in particular.

For all social and democratic forces, the warning sign from Sunday’s election that we should be most concerned about is that the AfD was the top vote-getter among the unemployed and working classes in Saxony-Anhalt and Baden-Württemberg, while many trade union–oriented wage earners voted for them as well. Both we, as well as the trade unions themselves, should be deeply alarmed that 15 per cent of union members in Baden-Württemberg and 24 per cent in Saxony-Anhalt voted for the AfD, despite the explicitly anti-union nature of the party’s program.

Not all of these people are racist or nationalist, but they are strengthening a racist and right-populist party. We have failed to adequately demonstrate the antisocial nature of the AfD and prevent the unemployed, underemployed, and downwardly mobile middle classes from being played against each other and against the refugees.

Saxon state chair Rico Gebhardt recently summarized the challenge we face well: “The greatest contribution that we on the Left can make to countering the rightward trend is to win back the working classes and the unemployed. That is a social challenge with a high antifascist effect.”

The rise of right-populist parties in Europe can only be understood against the backdrop of precarization, unbridled competition, and social insecurity that so many people experience in their everyday lives. The Union parties (CDU/CSU), the Social Democratic Party (SPD), and the Greens shoulder most of the blame for these developments. The gap between rich and poor continues to grow, not least because the Christian Democrats, SPD, and Greens still implement policies for the 1 per cent. Meanwhile, millions of people in Germany are threatened with poverty in old age by so-called pension reforms.

Since its founding, the particular function and responsibility of Die Linke has been to provide a public and a parliamentary voice to experiences of oppression and exploitation, and to fight together with other social groups to improve their conditions. It should concern us greatly that we have failed to become increasingly successful in these roles.

It is true that we require a solidary, critical, and constructive discussion about what lessons to draw from the three elections. But there is one thing we certainly will not do: respond with a shift in our refugee policy or a betrayal of principles like human rights and democracy. The fundamental right to asylum knows no caps or limits. Period.

As the left opposition we will continue to push for our “social guarantees”: a sanctions-free basic social security instead of Hartz IV; a decent minimum pension; higher wages and good, secure, dignified work instead of constant stress and existential fear; gender justice; and the strengthening of social infrastructure with affordable housing, better healthcare, and education.

“Solidarity in One’s Own Interest”

We want to do this together with many others who are concerned about the rightward shift in society and want to get active. And this, in turn, is what should give us a bit of hope.

Recent movements like the Refugees Welcome campaign and the fight against racism and right-wing violence, as well as protests against TTIP, armaments exports, and an increasingly authoritarian capitalism, have politicized a lot of people, particularly young people, in recent months. Many young people have joined the party in the last weeks and months. In big cities with milieus of young leftists, Die Linke is growing.

But the neoliberal unfettering of competition has led to a situation in which solidarity is alien to the everyday experiences of many people, who instead discriminate “downwards” rather than defend themselves against antisocial politics and enrichment by the bosses and the ultra-rich. As Die Linke, our primary responsibility is to formulate a message of “solidarity in one’s own interest” and make our opposition to neoliberalism and the 1 per cent clear and understandable in the way we speak.

Our society stands at a crossroads: either growing sections of the unemployed, precarious, low-wage, and downwardly mobile middle classes will join the right-populists and prepare the ground for further antisocial, authoritarian, and antidemocratic developments; or we will succeed in building a solidary social coalition of the unemployed, precariously employed, and wage-earning middle classes capable of beating back competition and social de-solidarization.

Katja Kipping and I have oriented toward this sort of coalition since we were elected party co-chairs. But developing a contemporary emancipatory – antiracist and feminist – class politics that promotes self-empowerment and solidarity, that brings together the unemployed, workers, single parents, the precariously employed, and the downwardly mobile middle classes for solidary organization and left-wing protest is a huge challenge.

The party has developed struggles against precarious working and living conditions; for the expansion of public housing, education, healthcare, and nursing for all; and for a radical redistribution of wealth as a strategic anchor that can also help to prevent the downwardly mobile middle classes from discriminating downwards.

We have also begun to concertedly approach the growing numbers of workers, disproportionately women, in the social services sector. These workers are impacted by the neoliberal drive toward higher profits and competition the most, while at the same time their labour is undervalued by society as a whole.

Together, our party should make greater efforts to get involved in the lives of these social groups while continuing to develop our own reform alternatives. In doing so, we will have to take the question of wealth distribution more seriously and, ultimately, declare war on the ultra-rich 1 per cent and Angela Merkel, who loses a lot more sleep over the concerns of the wealthy than she ever has over the refugee crisis.

Left politics is more than just a list of demands. What the Right promises is empowerment: both in their blind lashing out at the “established parties” and blanket denunciations of the media as the “lying press,” as well as in their distorted version of popular referendums.

The experience of powerlessness that reduces so many individuals to feeling like the playthings of various “foreign powers” must be countered with the experience that, rather than turning to racism and discrimination, it is actually the common struggle against neoliberalism that can improve one’s personal situation.

A politics that is palpable in localities, in workplaces, neighborhoods, and families, and that generates hope for change: we find many examples of a solidary politics of the everyday in our organization, such as actions supporting strikes and renters’ struggles, as well as the many initiatives to offer everyday community support under the banner of “Die Linke helps,” but they have not yet grown into a new political culture in our party.

We need a “Caring Party 2.0” (the former Party of Democratic Socialism, half of what is now Die Linke, was often referred to as the “Caring Party” of the east). We spend too much time speaking to people instead of with them, we make too many promises to do something for others instead of inviting them to get active themselves, to fight and organize with us.

This does not mean we have to discard everything we have done up to now. Rather, we should build on existing practices as well as learn from the positive experiences of others – both our own party, as well as allied left parties and organizations in other countries.

During the elections in Stuttgart we successfully tried out “recruiting campaigning” in a socially deprived area: in direct, door-to-door visits we talked to people about their experiences and their concerns, explained our demand for affordable housing, and invited them to a free breakfast we sponsored in the neighborhood. Before a single vote was counted last Sunday, we had already developed test projects to organize social protest in these areas later this year.

The core of our strategy is party building at the local level and thus the development of a new political culture and language. We can counter right-wing drift and social indifference with a politics of hope, solidarity, and democracy. •

Bernd Riexinger is, together with Katja Kipping, co-chair of Die Linke.